Happy All the Time by Laurie Colwin 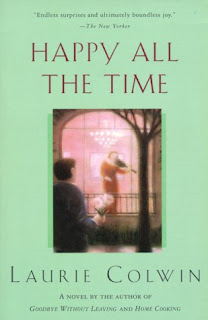 I'm slipping this review in before mid-month and I'm just going to ignore how little time that will give me to read the next selection of Tell Me What to Read. Last month Old school librarian suggested I read Happy All the Time

by Laurie Colwin. I had not heard of the book or the author before and was very interested to discover what was in store. Fortunately, my local library had a copy readily available. Originally published back in 1978, Happy All the Time

was the third of Colwin's five novels. Along with a few short story and cooking collections, those novels made up the bulk of her writing. It seems strange now that I'd never heard of her before as her novels have none of them ever gone out of print and it appears she still has quite a large and devoted following. A fact I completely understand and that makes me quite happy now, having read this perfectly delightful novel. Thank goodness for Tell Me What to Read, for I am quite sure I would never have stumbled across this treat of a book on my own.

Guido Morris. Holly Sturgis. Vincent Cardworthy. Misty Berkowitz. These are the rather enchanting names of the four principal players in our little drama. Guido and Vincent have been cousins and best friends since as far back as either of them can remember. Gifted with both privilege and personality, talent and wit, the two men have somehow managed to make it past graduate school and into bona fide adulthood without ever forming permanent or lasting attachments with members of the opposite sex. But all of that is about to change when they walk past a young woman with black hair and a composed face, sitting on a bench, and Guido falls instantly and madly in love. But Holly is not looking for love and Guido finds himself in the unfamiliar agony of being in love with someone who appears all but indifferent to him. Meanwhile, Vincent is coming to terms with his scattered and perplexing love life the hard way. Unsure of how to change things, he walks into the office one day and meets Misty Berkowitz, a cantankerous young woman of Jewish extraction who loathes and distrusts everything Vincent represents. And--just like Guido--Vincent is gone in one fell swoop. But like the lovely Holly (even though the two women are night and day incarnate), Misty has no interest in being wooed. What are these two earnest young men to do in order to convince the loves of their lives that they are, in fact, meant for each other?

Readers, I was utterly charmed by this book. It is a slim, unassuming volume to be sure. But within its pages is true loveliness. Happy All the Time

and one of those old Cary Grant/Katherine Hepburn confections had a lovechild. There was just no way I was escaping its spell. The emotions are high and fraught with meaning, the witty banter is sophisticated in the extreme, and the costumes are elegant and timeless. Here's one of my favorite interactions between the likable Vincent and the irascible Misty:


Misty woke abruptly and felt awful. She groped around for her glasses, couldn't find them, and sat very still, looking unfocused and bereft, as if she had awakened from a kind dream to find merciless and cruel reality waiting for her. Vincent thought he understood unhappiness, but he was not sure if this was it. He sat beside her and took her hand.

She shrugged her shoulders.

Vincent asked, "Does it help if I tell you I love you, or does it make it worse?"

She began to cry. It was the second time in two days, but its effect on Vincent was not dimmed by repetition.

His heart seemed to stop. This was it, but what was it?

"It's not what you're thinking," said Misty, looking at his stricken face. "It's worse. You're stuck with me. This is your last chance to bail out, Vincent. I don't think we were made for each other. Maybe you were made for me, but I was made for Attila the Hun."

"Are you telling me that life with you will be a living hell?"

"I am giving you one last chance to go off and find some nicer girl," said Misty. "Someone who knows her way around a sailboat."

"That's a disgusting thing to say. Last week you gave me a very compelling analysis on the workings of my stunning intellect. Now I'm supposed to take my intellect off and go sailing?"

And besides that, there's the Jewish question," said Misty.

"Oh, that," said Vincent. "I don't notice either of us being religious. Besides, my Aunt Marcia is Jewish. She married Uncle Walter. She's everybody's favorite relative. What's the big deal?"

"Our backgrounds are different," said Misty.

"This is not worth discussing," said Vincent. "We've done very well up till now, and we'll continue to do well."

"I'm not like your other flames," said Misty. "I don't know anything about dog breeding."

"Yes, you do," said Vincent. "The night we were comparing eccentric relatives, you told me that your Aunt Harriet wanted to cross Welsh corgis and Doberman pinschers and get a vicious but barkless guard dog for sneak attacks. That will be quite sufficient. Throw in my Aunt Marcia and you can see that we are ideally suited."

Tears slid out of the corners of Misty's eyes. She put her arms around his neck.

"That isn't all," said Vincent. "What are you scared of?"

"What else don't you know?"

"I assume that means that you have given a good deal of analytical thought to your feelings about me."

"My feelings about you appear to transcend analysis."

"Wonderful," said Vincent. "What are they?"

"I just love you," she mumbled.

"What a relief," said Vincent, smiling.

Well? Don't you want to go and find this book right now? I love Vincent and Misty so much. All four of them are memorable and layered and funny and offbeat, but I ended up responding most of all to Misty. Must be that inherent awkwardness and the tendency to analyze the people around me in my head, rather than going up and talking to them that we share. Either way, Misty is a kindred spirit and I sat there rapt as she worked through her feelings and came to grips with the fact that she loved someone who appeared to be so wrong for her, someone who--deep down--she felt rather sure would up and walk away someday when he woke up and realized just who he'd married. In this book, it's not about what happens in the end, it's about how they each get there. And it's worth it, I tell you. It's light and lighthearted, told in elegant, if occasionally fussy prose, and it will lift your heart and leave you perfectly sated.