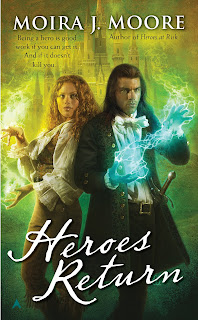 I literally bounced in my seat when I saw Heroes Return

pop up as being in stock and ready to ship a couple weeks ago. I quickly ordered my copy lest that lovely little "In Stock" button disappear, and I sat back to wait--impatiently--for it to show up on my doorstep. I adore Moira J. Moore's Heroes series because of the two main characters. Lee and Taro are incorrigible, endearing, at times pull-your-hair-out maddening, but they are two of my favorites and I look forward to each adventure with gleeful anticipation. I think about these two a lot when I'm not with them. I think about my favorite scenes--the ones where the let their defenses down for perhaps two seconds at a time and actually communicate. Sometimes I have to go re-read one or two of those scenes to remind me how subtle and real they are. We've hashed out these covers before in detail and I won't go into this latest disaster. Much. Except to say that never does blue lightning crackle between Taro's meaty paws. If that image worries you at all, let me set your mind at ease. Also, he is rather devastatingly handsome. Despite the way he is portrayed on the cover. This is the fifth installment in the series.

Not in their wildest dreams did Source and Shield Pair Shintaro Karish and Dunleavy Mallorough imagine they would ever be taken away from High Scape and reassigned to Taro's homeland of Westsea. But that is exactly what's just happened. Without so much as a by your leave, the newly minted Emperor orders them to swear fealty to him and pack their bags for the remote coastal city where Taro was born, and where he lived the first bleak eleven years of his life. Lee dreads the whole notion, what with the politics that are involved and the fact that Taro's mother the Dowager Duchess--otherwise known as the Wicked Witch of the West's less nice sister--lives right next door to where they'll be staying. But, as it turns out, the Duchess should be the least of Lee's worries. For there is something wrong afoot in Westsea. The new Duchess is scrambling to command the respect of her people, the Emperor's guards have been assigned a permanent post there amid rumors the people are engaging in spell casting, and the level and frequency of natural disasters in the area are increasing with every day that passes. Add to this the fact that Taro's abilities to channel are becoming erratic, Lee's passing interest in casting begins to ratchet up a few levels, and the Triple S seems awfully suspicious of them and their recent activities, and these two are in for quite the couple of years at this their new post.

Nothing is ever easy in the world of Taro and Lee. I don't know why I keep thinking things will settle down for a spell and they will be able to sort a few rather important things out. Like their monumentally tragic communication problem. Because Heroes Return

is all but a formal treatise on the failure to communicate and the disasters that result from said failure. I'm starting to feel like my favorite Source and Shield have fallen into a dangerous and dysfunctional habit of making assumptions rather than talking to one another. And I'm honestly afraid of where they'll end up if they don't address the situation in a patently overt manner. Because everything was subtle in this installment. Nothing was straightforward, upfront, or frank. Much of that wasn't Lee's or Taro's fault and, as such, I felt very defensive on their behalf. They were kept apart so much and they weren't fighting to be together. They need to do that a bit, I think, with how important they really are to each other. More so than in the previous books, even larger forces than they are used to seemed to be buffeting them about and I have the feeling there will be more dire reveals to come. This felt very much like a transitional piece and, as such, it was harder to say goodbye at the end, feeling so worried and discombobulated as I did. I feel as though the world itself may turn on them and I sat fretting for quite awhile after finishing. I know there is a sixth book on the way and that is very reassuring. What I don't know is what lies beyond that. Will things wrap up? Will there be more adventures beyond? Because nothing about Heroes Return

is neat and tidy and I am going to need some kind of meeting of the minds and souls to calm my poor heart. As always, I fell into Moira J. Moore's world, and into company with these loved characters, the moment I started reading and I did not surface again until the final page. I very much enjoyed the change of setting and the peeks into the Taro's origins and how different it is from other places in their world. Taro made me particularly proud in a couple of key scenes--one of them just especially well done. And I like that Lee is branching out in her interests, even if those interests give Taro fits. After all, Lee is right. He really is adorable when he's mid-fit. Another great installment in one of my very favorite series.

, The Hero Strikes Back