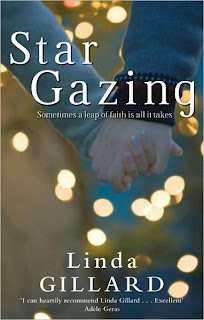 I first heard about Star Gazing

through Valerie's lovely review over at Life is a Patchwork Quilt. And I have to thank her for that review because I don't think I would otherwise have come across Linda Gillard's work. Gillard is a British author who lived for several years on the Isle of Skye, where much of this book takes place. From what I can tell, her books tend to focus on women above the age of 35, who are dealing with the everyday, yet perilous issues of adulthood, aging, love, mental health, family, etc. As such, they sounded sort of awesome to me, and I immediately placed her most recent book on my wishlist. It seemed unique and appealed to me for several reasons, including the fact that the main character is a blind widow. The setting was also a draw. I have only been to Scotland once, but it made a lasting impression on me and I love reading books set there. So that's why I was so excited to receive a copy of Star Gazing

for my birthday. I cracked it open that night, fell in love immediately, and pretty much flew through it.

Marianne Fraser has several valid reasons to be as angry as she is. Blind since birth, she's navigated her way through life without the ability to see what's coming at her. Widowed just a few years into her marriage, her grief was compounded by the fact that she was pregnant at the time and lost the baby shortly after the horrible accident that took her husband Harvey. Living with her sister Louisa in a flat neither of them much like, she goes about her daily routine with almost furious precision. Counting and memorizing the number of steps from here to there, she has a place for everything. Her few outlets include walking through the park, touching the trees, listening to the rain, and going to the occasional opera. One snowy eve she drops her key outside her door and a man comes along and offers to help her find it. Not thinking much of it at the time, she finds herself remembering his voice at odd times. So that when she randomly comes across him again on her next opera outing, Marianne is surprised at how pleased she is to have a chance to talk with him again. Keir Harvey shares more than just his last name with her departed husband, though. He, too, works on an oil rig, predicting where the best places to drill are, how complications will arise, and when storms might interfere with the work. Originally from the Isle of Sky, he returns home as often as he can to the only place he feels truly comfortable. When he offers to take Marianne there and show her the beauty of that wild place, she throws her habitual caution to the winds and jumps at the chance.

I ended this book so conflicted! The first half is literally moving. Simply and carefully written, it is so beautiful and readable. I was almost instantly enamored of Marianne and the dogged way she went about living what was left of her life. Even though I could not perfectly understand the monumental challenges she faced on a constant basis, I felt as though I was there right there with her. Her frustration and longing were palpable to me and I allowed myself to hope just a little bit along with her that Keir would be the unlooked for sweet resolution to her years of struggle and pain. Keir is a wonderful character. Strong and extremely blunt in his speech and mannerisms, he pushes Marianne to move past her carefully constructed inhibitions, even as he carves out a space of peace and gentleness for her in his life. Their interactions are taut and quietly affecting. Marianne's sister Louisa and her hilarious assistant Garth the Goth brought a nice level of humor and warmth to the story and I found myself laughing more than once at this homey woman who writes vampire romance novels by the score, takes care of her sister, and finds herself in the most unexpected of romantic scenarios. Suffice it to say, I was hooked. And then somewhere along the way things got murky. Marianne's anger and fears overwhelmed her and things got out of step between all of them. That in and of itself did not bother me at all. Rather it moved the tale forward in interesting and complex ways. But it never seemed to find its rhythm again after that. The conflict grew and grew and their interactions became stilted to the point that I was crying out for some sort of harkening back to that original connection they formed to relieve the awkwardness that had taken over. Somewhere along the way my involvement was severed and by the time the ending arrived I had become lost and could not find my way back to that breathless place of discovery that so enchanted me for the half of the novel. I guess I wanted a little more time to explore the resolution they came to. That said, I enjoyed it enough that I am definitely going to seek out Ms. Gillard's earlier work. Emotional Geology