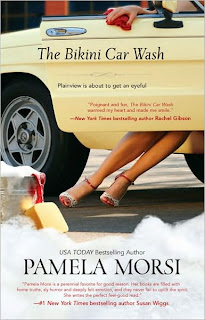 A couple of Tell Me What to Reads ago, one of you lovely people recommended I give Pamela Morsi's The Bikini Car Wash

a shot. It wasn't selected that go-round, but the title (surprise, surprise) stuck in my head and I would find myself thinking of it and grinning at random times here and there. So when I noticed it was available on NetGalley, I went ahead and downloaded it to DH's Kindle to have on hand on our trip to D.C. earlier this month. And, yes, I appreciate the irony that I read and reviewed this one that wasn't chosen before the book that was actually selected for Tell Me What to Read this month. Oh, what a tangled web we weave when first we promise to read... But I needed something different from what I'd been reading to sort of help me out of the world of the previous book, so to speak, and this contemporary women's fiction seemed like it might do the trick. I have never read anything by Morsi before and the only thing I knew going into this one was that it featured a former high powered businesswoman who, when she winds up back home in the small town where everyone knows her name, somehow opens up a rather unique car wash.

Andrea Wolkowicz is uncomfortable, confused, and in need of a job. Chafing at the ties that bind her to the small town of Plainview, she's walked out one too many job interviews knowing she wouldn't get the job because she was hideously overqualified. With an aging father and a developmentally challenged twin sister to look after, Andrea doesn't give herself much time to grieve over her mother's death. Determined to throw herself wholeheartedly at the task at hand until it conforms to a shape more to her liking, she goes down to clean out her father's old car wash business and has an idea. Along with a couple of other down-on-their-luck women in town, Andrea puts her considerable inhibitions aside and decides to open up Plainview's first Bikini Car Wash. That is what they'll call it and the name, well, it pretty well sums up exactly what the paying customers will get. Three women washing and detailing their cars while clad only in bikinis. It's a runaway hit and Andy begins to think about breathing normally again. Then popular boy turned family grocery store owner and operator Pete Guthrie stops in to say hi and things spiral downward from there. The city council is soon inundated by complaints from horrified citizens and Pete's dad's a prominent member of the council. Meanwhile, her dad's acting suspicious. Her sister's becoming more unmanageable. And Andy herself is engaging in what can only be termed a tryst with the town golden boy. What seemed like such a good idea has turned into a particularly messy can of worms and Andy's not sure she'll ever get the lid back on.

This is a very quick and easy read and I admit I thought the premise was hilarious. It promised light, pleasant fare when I needed it most. And I liked it all right. It just never crossed over into holding my attention and keeping it. Andy and Pete were cute, both fairly innocent and likable types who certainly deserved to find each other. But they never won me over. The townspeople and family members were plainly predictable and I just never cared about any of them enough to really invest enough of myself in the story to meet it in the middle, if you know what I mean. Most of the subplots felt cheesy and distracting more than anything else. The strongest aspect of the story--for me--was the burgeoning relationship between the three women who run the car wash itself. A waitress on the outs with her husband, a former grocery store employee/train wreck waiting to happen, and practical, reserved Andy. The three of them had literally one and only one thing in common, but found friendship working together in an environment they would normally find unthinkable. That was the real strength of the story and so naturally I wanted more from them and less of everything else. I believe a more in-depth exploration of that facet of the novel would have ensured my undivided attention. That said, I didn't bail but read it through to the end. Then I put it down knowing I wouldn't think about it again. Which proved to be the case. If you're in the mood for something along these lines but appreciate sophisticated writing and genuine charm and depth in your characters, give Sarah Addison Allen or Julie James a shot.