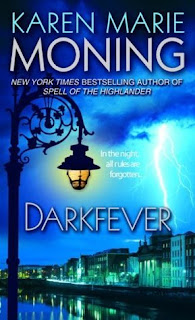 When I was offered the chance to review Darkfever

, I immediately accepted. I've heard so many good things about this series. I've heard it straddles urban fantasy and paranormal romance. I've heard it features a strong and likable protagonist as well as a rich world full of mythological beings, yet set in present-day Ireland. All of which things served to pique my interest. This was my first Karen Marie Moning book and I had high hopes for it as it is the first in a series of four books so far. The fifth and next installment--Shadowfever

--will be published early next year. As a longtime series reader, I like coming into an already established set every now and again. It goes a little ways toward balancing out all the others you've got lined up and are waiting impatiently for.

MacKayla "Mac" Lane is Southern belle through and through. Born and bred in Georgia, she and her big sister Alina followed their mother's proper example. But while Alina was always the studious straight laced daughter, Mac was the laid back one. Dropping out of college after a couple of semesters, she takes a job tending bar in a local pub and working on her tan in the off hours. Then the world comes crashing down around her. Her sister Alina is murdered while on study abroad in Dublin. And it isn't your run-of-the-mill mugging gone wrong. Alina's body was literally torn apart and the Dublin police have all but closed the case for lack of evidence. Sick of watching her parents sink further and further into depression and grief, Mac hops a plane to Ireland determined to make the police see reason and reopen her sister's case until the culprit is caught and brought to justice. Just before her death, Alina left a hysterical and cryptic message on Mac's phone and it is that fragment of a clue that pushes Mac deeper into the Dublin underground than she thought possible. And it is there that she discovers the fairy tales she read as a child--the things that go bump in the night--aren't so made up after all.

reads like Sookie Stackhouse-lite. Mac is blond and beautiful like Sookie. She likes nice things and she's smarter than people take her for. But she doesn't possess quite the depth of the telepathic barmaid from Bon Temps. I wanted to like her, but her cluelessness and lack of spark began to wear on me after awhile. I appreciated the Dublin setting with the rain and the fog, the endless pubs and the warm, cozy bookstores popping up out of nowhere. But the world itself never leaped off the page at me. Similarly, the Celtic mythology and the various factions of fae are right up my alley, but . . . I don't know. Some vibrant element was missing and my interest palled and eventually stalled out. The glossed over writing and characterization left me with only vague impressions of who, what, and where. The dark and deceptive Jericho Barrons who Mac encounters shortly after arriving in Dublin, and with whom she is repeatedly thrown together to find the object her sister was looking for, clearly works for many readers. But I found him unlikable and callous, any redeeming qualities failing to materialize in time for my affections to be engaged. I think I would have appreciated a little more backbone and a little less pink lip gloss from Mac and a little less chauvinistic manhandling and a little more complexity from Jericho. Or at least a stronger connection between the two to keep me going. I like that there is no precipitous romance in this first book, but as these two are the pillars on which the book rests, I needed to at least believe in some reason why they would be friends. And I just didn't. Overall, I finished Darkfever

lukewarm at best and, with so many options out there, I will not be continuing on with the series.

For a couple more reviews and opinions on the series you can check out the next two stops in the tour at Luxury Reading and Dark Faerie Tales tomorrow and Monday respectively.