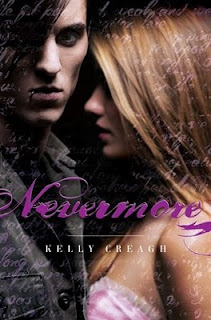 around and been drawn to it for its wonderful title and simultaneously sort of stayed away from it because of its not quite as wonderful cover. Not that it's bad, per se. But it does sort of scream vampire tale meets Gossip Girl and (with the glut of similarly veined paranormals out there) who needs that mess, really? But on the flip side, who can resist a book with lines from "The Raven" embossed all over it? (So pretty!) Or one that begins with a prologue featuring Edgar Allan Poe on the way to his mysterious death? (So awesome!) Yeah. Not me, that's who. Then a copy arrived to be read for The Cybils and I happily snatched it up and settled in for a long and satisfying night. Man, I wish I'd read this book around Halloween. It would have been perfect. Nevermore

is Kelly Creagh's debut novel and the first in a planned trilogy--a fact I was unaware of until I approached the ending and it hit me that no way were we going to get the kind of resolution I was hoping for. But don't let that worry you. If you're anything like me, you will only want to read more from Ms. Creagh and these characters after finishing this book.

Isobel Lanley is as All American as they come. Star cheerleader, member of the popular crew at school, older sister to a nerdy, video game playing pest of a little brother, Isobel's life is one continuous round of happily normal. Then one day she walks into English and is paired up with disturbingly not-normal Varen Nethers for the upcoming author project. With his drooping dark hair, goth fashions, and tendency not to speak when spoken to, he's pretty much the opposite of Isobel in every way. Hoping he'll want to switch partners just as much as she does, Isobel approaches Varen in class. But instead of switching, she ends up with Varen's number on her hand and a growing sense of fear in the pit of her stomach. Varen decides they will be doing their research project on Poe. He will do all the research, while Isobel will do all the talking. Uncertain but amenable, Isobel agrees to the deal and tries to go on with her usual activities and ignore this one small aberration in the usual round. Then things get a little more complicated as Isobel's boyfriend take a violent disliking to Varen and makes it his mission to terrorize him. Caught between the two, Isobel finds herself automatically defending Varen, particularly as they get to know each other better and she realizes there's much more going on under his forbidding exterior than meets the eye. But even as she digs below the surface, she is drawn into a conflict much darker and more dangerous than the ravings of a jealous boyfriend. And somehow it all centers on the melancholy subject of their English report and his own mysterious death.

came through for me in spades. I wasn't sure at first. After all, the basic facts of Isobel's existence aren't precisely endearing. Perfect cheerleader with a macho bruiser of a boyfriend and few thoughts in her head outside of the next game and what she'll wear today. But it quickly becomes apparent that there's something more substantial to her. I have to hand it to Kelly Creagh for creating a cheerleader I really liked. Isobel loves cheer for the athleticism of it, for the feeling of flying through the air, and for the strength and satisfaction she derives from training her body so meticulously. I can admire that. The events of this story are an awakening for her in so many ways and the awesome thing is she makes the right choices when important things are riding on them. That's what really won me over to her side. That and her steady recognition of Varen as something special. What made me like Varen so was how genuinely disinterested he was in Isobel from the get-go and how that disinterest was real and not thinly veiled lust. These two are not attracted to each other right off the bat. On the contrary, they despise and distrust each other for quite awhile. I loved that Isobel did the lion's share of the defending, the standing up to people and/or otherworldly creatures, the refusing to give up on anyone. Behind these two characters lies a wonderfully creepy background made up of the most chilling characters, images, and puzzle pieces from the works of Edgar Allan Poe. The spirit of Poe is most definitely captured here and I shivered numerous times, even as I smiled every time I recognized another allusion or reference to one of his stories or poems, especially the excellent anagram that is Varen's name. So many of them play key roles in the unraveling of the mystery, including my favorite--the enigmatic Reynolds. I will say that as the climax drew closer, things got a little discombobulating for me. Creagh's strength lies in stitching the two worlds together and when we plunged full bore into the Other, it lacked the cohesion of the rest of the story. That is not to say that my interest in the characters diminished one bit. Just that I could have done with a slightly more controlled unraveling, if that makes sense. As the end drew near, I knew it wasn't going to be enough, that I'd close it positively pining for more from Isobel and Varen. And so I did. Can't wait for the sequel!