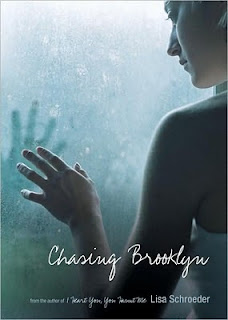 I love this cover. And I love the title. And I just really love this book. I'm so glad some thoughtful reader nominated it for a Cybils award this year, because I honestly don't think I would have picked it up otherwise. And I have no good reason for that except I think I somehow got the mistaken impression it was just another problem novel and I wasn't in the mood. Shame on me for making my ignorant assumptions and not giving this lovely novel a try before now. Chasing Brooklyn

is Lisa Schroeder's third novel for young adults but the first that I've read. I'm happy to say it will definitely not be the last! Interestingly, it's billed as a companion novel to Schroeder's earlier I Heart You, You Haunt Me.

I believe it features a couple of side characters from that book, but I found no trouble at all falling into this story without having read the first. It stands very strongly on its own two feet. I haven't read a really good novel in verse in quite awhile and I just adore them when they're well done. Chasing Brooklyn

is a perfect example of a novel in verse that is lyrically light on its feet, but pulsing with that breathtakingly uncertain blend of loss, longing, and love.

It's been a year since Brooklyn's boyfriend Lucca died in a car crash. One year since it became difficult to draw breath in and out every day, to get up every single day and make food for herself and her dad and then eat it, to go to school and pretend she's fine and not coming apart at the seams. To the outside world--her worried friends, her lonely father, her faraway mother and little brothers--she puts on a bright face. In her journal each day and in frequent letters to Lucca, she pours out the grief that consumes her. A talented artist, Brooklyn has all but forgotten her work. That creative spark seems to have dwindled in the past year until now it barely exists at all. And she wonders whether or not it is possible to recover from such loss. Maybe she never will. Nico has spent the last year mourning the death of his beloved brother. Lucca was always the golden boy--Mom and Dad's favorite, bright and shining and full of life. And the two brothers were best friends. Now it's just Nico. And their house is filled with silences he doesn't want to face. So Nico runs. And runs. He runs so fast and so far, like he's training for the race of his life. And then one day a message. Just a whisper. Barely discernible but there. "Make sure Brooklyn is okay." Nico is confused and afraid he's beginning to hallucinate. Surely Brooklyn is just fine by now. She looks fine every day at school. She doesn't look like she needs her dead boyfriend's older brother checking up on her at all. But Nico can't ignore the messages as they keep coming, more and more insistently. And so he finds himself reluctantly chasing Brooklyn.

What a simply lovely story is here. Chasing Brooklyn

is a surprisingly gentle, swallow-in-a-single-gulp read that left me smiling and feeling as though the sun had just come out after a particularly dreary day. One of my favorite things about it is there are no bad guys, no snide caricatures, no backstabbing or flashy, disingenuous "best friends." There is just honesty and unhappiness, kindness and real affection. Having lost loved ones myself, Brooklyn and Nico's experiences washed over me with the unmistakable rush of authenticity. The hint of the paranormal sets up several heart-pounding moments, but the focus remains steadily on how real people in the here and now reach out to each other and are able to build hope from the shared experience of loss. Here are a couple of my favorite entries:

In a funeral home

There is a coffin with a boy.

is my favorite day of the month.
The third Sunday of every month,
Ma makes a big batch of spaghetti with meatballs,
and relatives fill our house like fish fill a net
on a good fishing day.
The guys eat and watch football or basketball or baseball,
depending on the season,
while the girl eat
and talk births or weddings or funerals
depending on the month.
Ma's spaghetti slid into Lucca's heart as a toddler
and never left.
I know when she makes it,
she thinks of him,
how he'd come in and ask for a sample of sauce
as it simmered on the stove.
She'd fill a wooden spoon just for him.
He'd slurp the sauce.
She'd reach up and wipe his chin.
He'd say, "Perfection, Ma."
She'd smile, looking at him, and say, "Yes. It is."
I always wondered,
did he know she wasn't talking
about the sauce?

Hard not to like them after reading those, isn't it? Both of these kids were so clear in my head from the very beginning. I could smell the spaghetti sauce bubbling in Nico's kitchen. I could hear the click of the door closing as Brooklyn said an empty goodnight to her father once again. I loved Brooklyn's and Nico's journal entries and how they articulated the ways in which grief shaped their lives in the year after losing Lucca. It's easy to want the best for both of them. And it's impossible to resist Nico's halting efforts to find Brooklyn and help her in whatever way he can. The boy is a keeper if ever there was one. Chasing Brooklyn

is a sweet and haunting story and absolutely one that should not be missed.