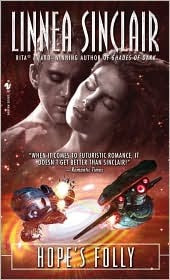 It's been too long since I let myself slip into Linnea Sinclair's Dock Five universe. Way too long. I love science fiction. I love space opera. And this series is just one of the best out there. I read the first book--Gabriel's Ghost

--a couple of years ago now and I've read several of Sinclair's other non-Dock Five books in between then and now and thoroughly enjoyed each of them. Games of Command

is still my favorite. That Kel-Paten. Gets to me every time. But when I finally picked up Hope's Folly

the other night in desperate need of some good action and romance, I wasn't prepared for how quickly the world would suck me in again. This installment follows a side character from the earlier books--Chaz's ex-husband and confirmed lifer Admiral Philip Guthrie. I love getting the real story on what's going on with a character we've previously only seen through other characters' eyes. And I wasn't disappointed with Philip's story.

Having lost pretty much everything that kept his highly structured life together, Admiral Philip Guthrie isn't exactly comfortable on the other side of the fence. Once an esteemed fleet official and member of one of the most revered (and loaded) families around, Philip now finds himself pulling together an unlikely and undisciplined band of rebels in a last ditch effort to hold off the ever-expanding Imperial fleet. With a wounded leg as a souvenir to remember them by, Philip is older and slower and more thoughtful than he used to be. None of which particularly please him, but all of which endear him to his new crew. And sub-lieutenant Rya Bennton is no exception, though she'd like to be. Rya actually knew Philip as a kid, when she was a wild tomboy and he a handsome soldier with a knack for weapons and strategy. She's idolized him ever since, never thinking she'd actually see him again after her father was killed and Philip disappeared off the map. But suddenly they're on the same beat up cruiser ship together--Hope's Folly--, he's her commanding officer, and he certainly doesn't remember one young girl he once taught how to shoot. Determined to put aside her reservations, Rya ignores her personal feelings in favor of helping keep Admiral Guthrie safe and uncovering what really happened the day her father died.

Delectable. That's what this book is. I read it in two large gulps and felt happily sated afterward. Philip and Rya are the kind of protagonists Ms. Sinclair excel at--essentially noble (if slightly reckless) individuals who put duty before personal desires and are drawn against their formidable wills to the other person for their strength, courage, and taste in weapons. I wondered just how I would like Philip after being slightly prejudiced against him from reading Chaz's version of events. Turns out I like him just fine. Better than fine. He's a gem and he totally deserved his own story and at least a chance at a happy ending after everything he went through. Rya was a different kind of heroine from Sinclair's others. Full-bodied and fully capable of keeping herself safe and dismantling a weapon or a man as needed, I liked the way she took on Philip and his forceful personality. There was less focus in this one on the greater conflict between the Alliance and the Imperial Fleet, though it certainly hangs over every step they take. But I guess I felt as though the relationships between the various people on the Folly took precedence. And wouldn't you know that's exactly what I was in the mood for. The age difference between these two didn't bother me either. They complemented each other so well that other things faded away in the wake of my enjoyment of their antics and halting steps toward understanding. Definitely recommended for fans of space opera and the Dock 5 universe.