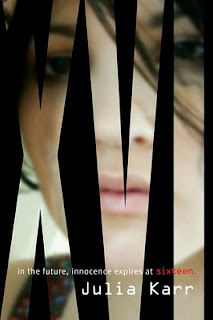 It's a little bit strange, but I feel as though I've grown particularly choosy when it comes to the dystopian novels I pick up lately. I'm not sure if this is a result of the seemingly increased number of YA ones, in particular, being released. Or if it's merely that my taste is evolving somewhat over time. I did read several for the SciFi/Fantasy panel I served on for the Cybils this year. Some were good, some not so good., as is to be expected. But so often the substance fails to live up to the premise for me. And those are sad days, where I wonder what went wrong and if it was the book, the execution, or me. In any event, I was looking forward to the release of Julia Karr's debut novel--XVI

--with a fair amount of anticipation and curiosity, hoping it would stand out among its fellows and earn a permanent spot on my shelves. I read it in the space of a single evening and have been examining my thoughts on it for a little while now.

Nina Oberon is about to turn sixteen. And in her world, this monumental occasion is about more than just a driver's license and more freedom on the dating field. So much more. At the ripe old age of sixteen, or "sexteen" as her world calls it, girls are essentially fair game for any and every boy/man/pervert that comes strolling by. Girls turn sixteen and get the infamous XVI tattoo on their wrist proclaiming their newly available status and Nina, for one, is scared. Most girls, like her hyper best friend Sandy, can't wait to achieve their new status in the world. Drunk on the wealth of male attention that will come their way and the promise of a whole new host of opportunities that will come their way, they anxiously look forward to the day they get their tattoo. Not so for Nina. Raised by her pragmatic, if romantically hapless single mother Ginnie, along with her younger sister Dee, Nina has grown up dreading what will happen when she reaches her sixteenth birthday. Her mother has trained her not to believe the rosy, inane images the media blithely shoves down young girls' throats and Nina is cautious to the point that when her longtime friend Derek begins to see her in a different light it triggers outright panic in Nina. Then her mother is brutally murdered in a back alley and, on her death bed, she reveals to Nina that her father isn't actually dead and that she must find him and keep her sister Dee safe.

Okay. Lots of potential, right? I liked the setup and I definitely liked Nina. She was strong from the start and it was a relief to read about a main character who doesn't spend the entire novel in the dark, floating around believing the garbage her society has set up as reality. However. Those were the only strong points in the book. The rest of the cast of characters felt disturbingly two-dimensional. They were good cut-outs (particularly Wei and Derek) and they could easily have developed into fully-fledged characters who I really admired and followed. But they stayed in the background, flat and chirpy, never fully inhabiting a spot on my radar. Even Nina's growing relationship with a mysterious, possibly homeless, boy named Sal never got its feet off the ground. I didn't buy Nina's too-sudden weak knees, given how adamant and self-possessed she was to begin with. And I really didn't buy Sal's too convenient interest in her, given what we learn about their interlocked past and his involvement with many things underground. There were no real reasons behind their association and I found myself fairly ambivalent toward them both. The treatment of underlying themes soon began to bother me as well. What could have been a compelling exploration of adolescent life in a terrifyingly misogynistic society quickly devolved into an oddly simplistic tale with very little to recommend it. Things moved too slowly and not far enough to provide a satisfying conclusion in which I could feel as though progress was made and character arcs developed. Rather the conclusion was anticlimactic and verging on the trite--so not in keeping with its edgy, loaded premise.