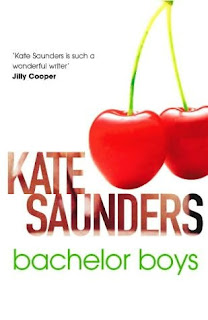 I picked this one up based on the recommendation of the trusty Emily of Emily and Her Little Pink Notes (may she blog again soon). Prior to Emily's review I'd never heard of Kate Saunders before and so went in knowing next to nothing but that it was a rather obscure British chick lit and Emily was awfully fond of it. And that's essentially enough in my book. I had a little trouble finding a copy, but then my Christmas elves came through for me once more and I received a copy of Bachelor Boys

as a gift this year. I'll tell you, I've just been in the mood for these kinds of books lately. And by lately, I really mean since the beginning of the year. Smart, sassy, beleaguered women, up to their eyeballs in the competing forces of work, family, dating--or the extreme lack thereof. I don't know what it is. But these witty, artful, and sometimes emotionally wringing British stories have just been doing it for me in spades.

Cassie grew up next door to a home. Her mother was a psychiatrist deeply involved in her work and inclined to view her only child more as a specimen to be studied than an actual, you know, daughter. Her father was . . . well, a real piece of work is about the only way to describe him. As parents they were less than desirable, presenting a united front of frigid indifference. But next door? Next door lived the Darling family. The big, teddy bear-like dad, the two boys Fritz and Ben, and the mother Phoebe. To Cassie, the Darlings represent everything that is warm and welcoming and good. When they spot her peeping over the fence one day, the Darlings immediately invite her over. And from that point on, Cassie has a home and a family. Real ones. Years later, now the editor of a lit mag, Cassie receives a phone call from Phoebe informing her that she has the most incandescent of plans. In short, she intends to marry off her two bachelor boys and it is up to Cassie (who knows them better than anyone) to find them suitable women. And fast. You see, Phoebe would like to see them both safely married. And she has a limited amount of time left before the leukemia that's eating away at her reaches its goal. And so, despite her myriad misgivings, Cassie promises to help. Quite simply, she would do anything for the woman who was her mother in every way that counted. The problem is, of course, the boys. Charming as hell, insanely talented, and rakes to the core, how will she ever whip them into shape in order to be married off in time?
Let me just start by saying it was the writing that impressed me first with this book. It was unexpectedly layered and leisurely. Kate Saunders certainly understands how to take her time telling the story, in order to give the reader enough space to absorb the wealth of history that lies between Cassie and the Darling family. The luminous relationship between Cassie and Phoebe is what comes out first and most startlingly. And, wow, is it lovely. The book is worth the read just for that dynamic alone. Phoebe is artful and elegant and full of love and style and a heart big enough to encompass any and all who come across her path. She reminded me a fair bit of my own mother-in-law, and I understood Cassie's enchantment and love for this woman who put her arms around her as a child and never let go. Of course, no one in this book is perfect. Not even Phoebe. Some of them are more woefully flawed than others (why, yes, Fritz ole boy, I am looking at you), but they all occupy the gray areas when it comes to their insecurities, vices, and motivations. Cassie herself is charming and a worthy heroine, despite her blind spots when it comes to the proper men to date. But you can't help but sympathize with each and every one of them. We none of us cope perfectly when love, ambition, and our dratted pasts get in the way. It was a delight to trace their winding course toward the finish. The ending was hard-won and came at a price for all of them. But the journey was decidedly worth it. Highly recommended for readers who like their chick lit with a hearty dose of depth, emotion, and exquisitely drawn family interactions.
Linkage
Emily and Her Little Pink Notes Review
Lit Snit Review