Song of Scarabaeus by Sara Creasy 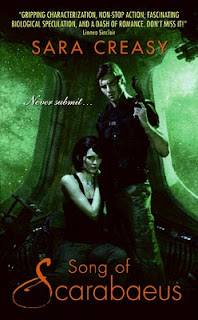 I am, well, there's no other way to put it, distressingly late in finding this absolute gem of a book. I don't know how it slipped under my radar until now. I'm not complaining too loudly, of course, because I discovered and devoured it just in time for the sequel to come out at the end of this month. And that, my friends, is nothing to sneeze at. I'm used to waiting years for books. A couple of weeks will not kill me. At least, that is what I tell myself so I can sleep at night. I am, in fact, positively pining away for Children of Scarabaeus

as I type this. But it is just a tad embarrassing how long it took me to discover Sara Creasy's debut novel. After all, some of my favorite reviewers featured it back when it came out last year. Clearly, my head was not where it should have been. But I am happy to say that I've spent the last two nights rectifying the situation and that, if scifi adventure with an enticing hint of romance is even remotely your thing, you need to run out and read Song of Scarabaeus

right now so that you, too, will be able to snatch up the sequel the moment you can get your feverish little hands on it.

Edie Sha'nim is the best there is. A trained cyphertech, she works for the mighty Crib empire terraforming new worlds. In other words, she's the girl they take to a barely formed planet in order to remake it in the Crib-approved image. Taken away from her home world as a young girl, Edie has been trained and tested to within an inch of her life. A life that resembles indentured servitude more than anything else. She's held all her defiance and all her rage inside all these years, only once letting it out in a burst of independence and refusal to submit to the Crib's all-encompassing will. But that was years ago, and the only memento she keeps to remind herself of that moment of defiance is the small shell of a beetle, embedded in her skin. Then one day, Edie is confronted by a gang of mercenaries determined to kidnap her and put her considerable (and lucrative) abilities to their own purposes. Longing to escape, but unsure of the right thing to do, it is a fellow captive and serf named Finn who changes her mind. And before she knows it, the mercs have leashed her (quite literally) to the mysterious former slave. His mind is connected with hers. He is to serve as her bodyguard and ensure no one else intent on stealing their new biocyph expert has a chance to do so. And just to make it that much more threatening, if Edie dies, so does Finn. Or if the two are separated by too much distance, the leash will sever, and Finn will be destroyed in the process. And so the two unlikely allies must stick together long enough to figure out a way to break the leash and escape. But then Edie realizes just what planet they're headed for, and the past comes back to haunt her in a truly horrifying way.

So good. This book is just so very good. It reminded me why I have always loved science fiction so much and it did so in such a seamless and readable way that I have to give it up for Sara Creasy and her mad, debut writerly skills. Sometimes a scifi book tries and fails to walk the line between tech-term/infodumping extravaganza and drippy/emotional hot mess. This is so not the case here. Rather, Song of Scarabaeus

is like a primer on how to combine excellent characters who capture your heart with a detailed and fascinating look at the ethics of exploration and the treatment of humankind on a grand scale. And how nice it is to have a relationship that doesn't start with insta-sparks the moment two hotties lay eyes on each other. *insert eye roll* This book has been highly recommended for fans of Linnea Sinclair and Ann Aguirre, and I do absolutely think it will appeal to those readers. I love both authors myself. But I do feel I should mention here that it stands entirely on its own merits. And that, in addition to having endearing characters and an utterly compelling and heart-racing relationship unfolding between them, Song of Scarabaeus

is the real deal as far as science fiction goes. And  holistic storytelling. The truly elaborate and organic world building blew me away and kept me engrossed from beginning to end. Edie and Finn's foray onto Scarabaeus is the thing of nightmares and the cringeworthy factor is pretty high in certain parts. But it only serves to impact the reader's experience and expand the themes of the story. That said, I am all in when it comes to the relationship, and I will shamelessly beg for more development between these two in future installments. Because the romance is in early stages here, but what's there is choice. And I, for one, am ready for more. This one kept me up late, guys. No finer recommendation. Also--major points for a perfect last line. I do so love those.