House of Silence by Linda Gillard 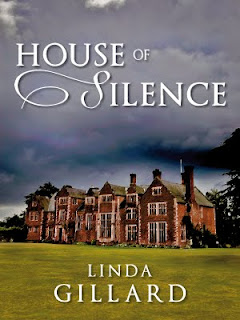 last year. I will never understand why her books aren't more available here in the States (and just in general), and I love talking them up so that more readers can find and enjoy them just as I do. So when Linda alerted me to the imminent publication of House of Silence

, I knew I would have to get my hands on it. It sounded deliciously fun. The story of this book's publication is very interesting indeed. Linda's been trying to get it published for more than three years, but publishers seemed reluctant to attempt to market this cross-genre novel. Linda describes it as Cold Comfort Farm

. And, of course, I'm sitting here thinking to myself, who in their right mind wouldn't want to read that book? Sometimes the publishing process mystifies me. So finally Linda decided to publish the book herself as an e-book. I applaud the move, and I was lucky enough to receive a copy for review.


My friends describe me as frighteningly sensible, not at all the sort of woman who would fall for an actor. And his home. And his family.

Gwen Rowland is precisely that--frighteningly sensible--though she has shockingly good reason to be. Raised (and I use the term incredibly loosely) by the unholy triumvirate of her drug addict mother, her nymphomaniac uncle, and her alcoholic aunt, Gwen's life has been one long exercise in pure anxiety, solitude, and longing for someone--anyone--she can trust. Orphaned and alone by the age of sixteen, she's since grown up and made a life for herself as a costume mistress. One day, while working on set for a BBC period drama, she meets the charming and offbeat Alfie Donovan, an actor playing a supporting role in the production. They strike up a friendship, which eventually leads to romance, and by the time Christmas rolls around Gwen feels it only natural Alfie might invite her to his home for Christmas. Seeing as she has no family to speak of. The usually composed and dapper Alfie is oddly reluctant, but he eventually agrees, and the two set off for his family manor in Norfolk. Though Alfie has prepped her for the eccentricities of his four sisters and mother, the reality is much more than Gwen expected. And soon she finds herself entangled in the unfolding drama surrounding the hapless and disturbing inhabitants of the Creake Hall.

What an absorbing read House of Silence

is. I will admit to a slight case of nerves as I sat down to read Linda Gillard's fourth novel. I had loved Emotional Geology

so much, and I suppose I was somewhat worried about the self-publishing aspect, etc. But my mind was immediately set at ease as I found myself intensely fond of the characters right off the bat. I chuckled aloud at least a handful of times within the first few pages, and the writing was decidedly assured and the pacing even and extremely smooth. I loved the setup. Gwen (short for Guinevere, much to her distress), is a wonderfully sympathetic character, and I thoroughly enjoyed watching her work her way into the hearts and lives of Alfie's family. A favorite passage early on:


We were kindred spirits in a way. Detached, self-centred, yet both obsessed with the past. Our past. The difference was, I had no family and Alfie did. He had a family-- a large one --but mostly he behaved as if he didn't, as if he wanted no part of them, however much they might want a piece of him.

As a lonely child, then a solitary adolescent, I used to fantasise about having a family--a proper family, teeming with rowdy siblings, jolly aunts and uncles and of course doting parents. Alfie had that. But I suspect his fantasy was that they all died, leaving him in peace as sole owner of Creake Hall.

It was a macabre joke we shared that he lived on grim expectations. I used to chide him for his callousness and he would get angry, which was unlike him. He'd say, 'You have no bloody idea, Gwen! You don't know how much they expect of me.'

And it was true. I had absolutely no idea.

The comparison to Cold Comfort Farm

and, I think, to Rebecca

is very apt. I was amused, touched, and effectively creeped out in turns. And I had a very good time attempting to decipher the mystery, to figure out just exactly what dark secret lay lurking under the quirky surface. The answer, by the way, doesn't disappoint. And I would be remiss if I didn't mention the touch of romance in this book. I've loved that aspect of Ms. Gillard's previous books, and she comes through once again here in an extremely moving, tasteful, and unexpected way. The elusive and so often painful threads of our lives--happiness, family, grief, most of all, perhaps, forgiveness, as well as the daily struggle to hold them all together within one's consciousness--are at the heart of this engaging story. House of Silence

is a perfect choice for a rainy day or an evening in front of the fireplace. It has a little bit of everything and I definitely recommend it.