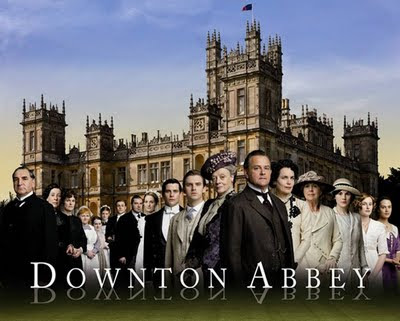 You guys. Honestly. I don't know what I did with my time until I discovered Downton Abbey. I mean, I'd heard about it here and there. And, yes, any mention of a British costume drama usually reels me in hook, line, and sinker. But nothing had really pushed me over to investigate until my good friend Holly mentioned that I would really like it. Like, really like it. She was in the middle of it herself at the time and somehow I could just tell from the earnest and excited look on her face that she was right. So I mentioned it casually to DH that evening and, when I got home the next night, he had it all queued up and ready to go.

So, for those not familiar with it yet, Downton Abbey is a British period drama series that was broadcast here in the U.S. early on this year as part of Masterpiece's 40th anniversary season. It stars a few favorites of mine: Hugh Bonneville, Maggie Smith, Brendan Coyle (enshrined in my heart for his spectacular portrayal of Nicholas Higgins in North & South), and even Elizabeth McGovern. Set in the couple of years leading up to World War I, it follows the Earl Grantham and his family as they struggle to deal with the death of the family heir and the arrival of the new heir--a third cousin who has the unfortunate and shocking nerve to be a lawyer. The horror. Drama (oh, what drama!) unfolds both upstairs and below stairs, as the Granthams and their servants engage in all manner of intrigue and shenanigans. The whole thing is delicious. And riveting. What with the scheming footmen, the hilarious dowager countess, and the swoon-worthy costumes, DH and I fell immediately under its spell. We dreaded the viewing of the final of the seven episodes and are resting our hopes and dreams on the reports that this supremely entertaining series has been renewed for a second season set to air this fall. If you're a fan of costume/period dramas, excellent casting, and love a good yarn, then I highly recommend you get a hold of it just as soon as possible.