BBAW: Interview with Ryan of Wordsmithonia


The interview swap day is always one of my favorite parts of Book Blogger Appreciation Week. I anxiously look forward to finding out who my partner will be and then have a grand time exploring their blog. Invariably, it is a new-to-me site and I love the excuse to branch out and add a new blog to my reader. This time around I was lucky enough to be paired with Ryan of Wordsmithonia. So without further ado, please welcome Ryan! 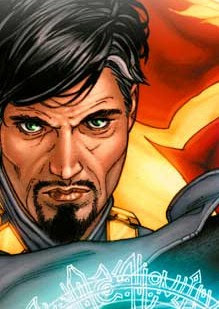 What prompted you to start a book blog, and how has your approach to blogging changed, if at all?

It all started on a dark and stormy night....actually I think that may be true. I had been on the Barnes & Noble book club forums for about a year and a friend on there had started her own blog. I had never been a big blog reader in the past, the few I did read, were mainly political (liberal) blogs. She, Deb of Book Magic, seemed to be having a lot of fun doing it, so I checked her blog out, but even then I never thought of starting my own. She just kept on having so much fun doing it, that I had to get in on the action. My first post went up Saturday, July 18, 2009. I haven't looked back since. I know that's a long answer to the first part of the question, so I will try to keep the second part as short as I can.

I don't think I have changed my approach too much. I still, I think, primarily do the blog for myself. If I don't like the way something is done, I change it. I realized early on that if I'm not happy with what I'm putting out there, not many others will be. I still get overwhelmed at times that anyone even bothers to read Wordsmithonia, let alone follows it. I'm grateful for every single person who reads the blog, whether they comment or not. My advice to anyone who is just starting out is, enjoy what you are doing. Have fun with it. Don't let anyone else make you doubt what it is you are doing. If you ever get to the point where book blogging isn't fun, stop doing it. You don't want this too feel like a tasking second job that you don't' get paid for. I think this part was even longer than the first, sorry!

Have you always been a reader or was there a specific book or series that really got you into reading?


I've always been a reader. My mom tells people that I learned how to read before I learned to talk. I'm not so sure she's joking on that one. In the beginning it never really mattered all that much what I read. I loved the Sweet Pickles books. I would devour the Golden Classics series as much as any other kid. I even loved My Book Of Bible Stories, the old one with the yellow and red cover. I even remember one summer of going through my great-grandma's set of Encyclopedia Britannica.

It wasn't until I was a bit older that I became a reading nerd though (okay, maybe the encyclopedia thing started it.) I discovered mystery books and I was a goner. It started with Encyclopedia Brown, Nancy Drew, and The Hardy Boys. It quickly became an obsession and by 5th grade all I wanted were Agatha Christie books. 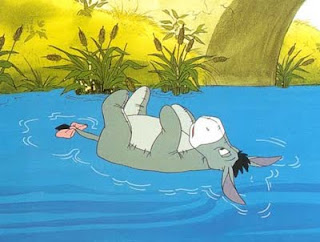 In your About Me section, you describe yourself as (among other things) an Eeyore admirer.  Do elaborate.

Oh, Eeyore. Such a misunderstood guy. First of all, I love him because he's just so damn cute. There is nothing about him that doesn't make me want to go to The Hundred Acre Wood and bring him home to live with me. He's a pessimist and always a bit sad, but there is an undercurrent of hope about him. He's not one to sit around feeling gloomy all the time, though it appears that way at times. He's always thinking that something will change and make the world right again. He's an optimistic pessimist. He's a lot like me in that regard, I mumble and complain a lot, but mostly that's for show. At heart, we both know everything will work out, and I don't think either one of us would have it any other way.

My only issue with Eeyore, and this is mainly Disney's fault, is the way the company will feminize him. It's very hard, I dare you to try, to find merchandise that makes him look like a guy. I have seen so many coffee mugs in pastel colors with flowers all around. I own one mug that looks like a guy's mug, and it took years to find. I even have a stuffed animal of him dressed as the Sugarplum Fairy, tutu and all. What other male character would they do that too. The poor guy.

What do you do when you hit a reading slump and nothing you pick up seems to do the trick?

That's when I put the review books down and go back to an old favorite. I'm a huge re-reader for the simple fact that if I loved the book, why would I not want to revisit it. I have quite a few books that have been read at least 10-12 times. I have a few of them I will go to for a bit of relief: Watership Down by Richard Adams, The Haunting of Hill House by Shirley Jackson, The Thief of Always by Clive Barker, quite a few books by Agatha Christie, and The Last Herald Mage trilogy by Mercedes Lackey. There isn't one of them that isn't guaranteed to perk me back up and set me down the road of enjoyment again. 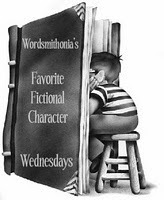 I love your Favorite Fictional Character Wednesdays!  I know exactly what you mean about those characters that really mean something to you.  If you had to pick one character to be stranded on a desert island with, who would it be?

Thank you! I have so much fun doing the feature. It's always a great time to go back and think of some of the characters that I've enjoyed over the years. When I first started doing it, I thought it would last a few months or a year at most. I didn't think I would be able to keep coming up with great characters. Thankfully I didn't run out and I don't think I will anytime in the foreseeable future.

If I had to pick one for the long term, it would be Vanyel Ashkevron from The Last Herald Mage trilogy by Mercedes Lackey. First of all he's pretty frickin hot, even with long hair, not something I would normally like, but I'll make an exception for him. He's that hot. He's very intelligent, so conversation will flow easily. He's a master Bard, so he will be able to keep me entertained with music. He's a master with a sword, so any unfriendly natives would be quickly taken care of. The fact that he is one of the most powerful mages to ever exist would keep us safe and should provide most of the comforts we would need. Now that I'm thinking about this, being stranded on an island with him would be quite nice. Is there anyway for me to sign up for it?

What book have you found yourself recommending the most this year?

Of the books I've read for this first time this year I would have to say either Crooked Letter, Crooked Letter by Tom Franklin or The Swimming Pool by Mary Roberts Rinehart.

If you asked me about my all time favorite books to recommend (other than the ones I mentioned in my answer to the reading funk) I would say: Atlas, Shrugged by Ayn Rand or Pandemonium by Daryl Gregory. They are both terrrific books that everyone should read.

Thanks so much, Ryan!

If you have a chance, do stop by Wordsmithonia today for Ryan's interview with me.