How to Save a Life by Sara Zarr 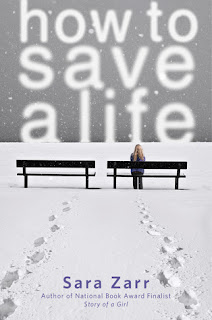 Well, I knew this was going to be hard. I knew that going in. I mean, how do you go about revealing something like this? It's embarrassing is what it is. And I hate being embarrassed. But it's also the truth. So here you go--the truth in all its humiliating glory:


This is my first book by Sara Zarr.

That's right. Before I picked up How to Save a Life, I had never read a Sara Zarr book.


Cue the echoing Silence of Judgement.

Okay, before you go off all half-cocked--I know. I know. It's just that everyone loves her. Like Sarah Dessen kind of love. And I was afraid I'd be disappointed (particularly as Sarah Dessen doesn't do much for me--I know, I know). So the hype got to me. I'm not proud of it, but there it is. And I'm not sure exactly what pushed me over this time around. All I can say is I saw this one pop up on NetGalley and just felt like it was time.

Jill doesn't recognize herself anymore. Ever since her father passed away eight months ago, it's been like this. She and her mother are existing in the same house, but that's about it. The crushing realization that he was the one thing connecting them weighs on Jill's soul, as day by day she grows more and more remote, driving away her friends, her boyfriend, and especially her mother. Then her mom hits her with the astounding news that she plans on adopting a baby. And not just that, but the teenage mom currently carrying said baby is on her way to stay with them for the duration of her pregnancy. And so Mandy enters their lives. Her past a big, vague gray, Mandy moves into the MacSweeney household and changes the frigid dynamic between Jill and her mother Robin in so many subtle ways. And while Robin fawns over Mandy, anxiously checking on her welfare, her comfort, her general happiness level, Jill suspects a snake in the grass. Determined to find out just exactly where Mandy comes from and why she doggedly insists on doing this open adoption her way, Jill sets out to protect her grief-blind mother from making the biggest mistake of their lives.

Jill is my kind of narrator. She's gruff on the outside, bit softer on the inside, and she would rather show anger than fear. And so she does. In spades. Those around her have to really care about her to stay. And when we meet Jill, there aren't so many of them left. Mandy is not normally my kind of narrator. She is ponderous in almost every way. Basically the polar opposite of Jill, Mandy wears long flowered dresses and "does" her hair every day. But she is also wonderful. Wonderfully awkward socially. As the narrative alternates between Jill and Mandy, I was able to get my fill of each girl. And I loved every minute of it. How well-rounded Sara Zarr's writing is, how smart the dialogue, how thoughtful the prose. Here's is one of my favorite examples, from Mandy's point of view (taken from my uncorrected ARC):


I don't want my daughter to ever hear a story or see a piece of paper or know that one exists on which I signed her away. I don't want her to ever think that I didn't want her. No matter what. I don't want to leave any evidence she could find later that she might think proves to her the worst things she thinks about herself on a bad day. Not when she's ten, not when she's fifteen, not when she's forty. Maybe I'll be there to explain it to her, but I can't know that sure enough right now to plan on it. I want it to feel like fate, the way she ended up with Robin. I want to be in her life like a good dream, like someone who might not always be there but who never really left. Her world should feel full of possibilities and open doors, not full of things that are closed and final.

I mean, come on. How beautiful is that? And more than that, it's right. The writing rings with authenticity and feeling. My throat actually began to close up reading that passage, it felt so true. The excellent thing is, Ms. Zarr excels on several fronts. She is able to weave together the perfect blend of the profound and the light--such an important quality in contemporary literature, I think. Jill's relationship with her sometime (some would say long-suffering) boyfriend Dylan comes to mind. As does her friendship with Ravi--a boy from her high school who she reconnects with in a rather hilarious way. Because I can't resist, here is just a great passage early on between Jill and Dylan:


"I almost thought you weren't going to come. But I know you and winter and Tuesdays and pho."

Dylan has this whole rating system for everything--food, bands, clothes, teachers, movies, cars, songs, life events--based on the game rock-paper-scissors. Whatever is the utmost in awesomeness, whatever is profoundly good, whatever is right and true, is rock. Because rock, though it can be beat (or "hidden," as Dylan prefers to say) by paper, can never be destroyed.

Brilliant. And just like that, it becomes impossible not to like both of them. Dylan for coming up with such an awesome system and Jill for understanding it. And him. I liked all the characters in this book. They were presented in 360, if you will. As a result I, as the reader, was afforded the opportunity to view them from all angles. And so I loved them. Because I knew them. You're so smart, Sara Zarr. Love is rock.

How to Save a Life is due out October 18th.