Until There Was You by Kristan Higgins 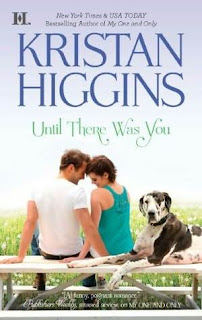 It's taken me forever to get around to reviewing this one, and I feel bad about that, because I don't want that lag time to be a reflection of my reaction to it. At all. This is actually the second Kristan Higgins book I read immediately after inhaling All I Ever Wanted a few months back. It's also her newest publication, and I was interested to see if I liked her new stuff as well. You know how sometimes you really connect with an author's work from a certain "period," if you will? And then some of their other works don't quite do it for you? I really hoped this wouldn't be the case with Higgins. Given how blissfully I fell into my first of her books, I had all sorts of appendages crossed for more of the same. I knew she had a huge fan following, but I also knew that (much like Jennifer Crusie or Julie James) people seem to really have their favorites and the ones they just didn't like much at all. Case in point, I thought All I Ever Wanted was the freaking bee's knees, but not everyone feels the same. Which is just dandy. I'm glad of it, in fact, as I'm always drawn to authors where that is the case. Which camp will I fall in? Which bench will I plop down on and feel at home? The anticipation is excellent.

Posey (short for Cordelia--sort of) Osterhagen has asserted control over her life. At thirty-four years old she's no longer living with her adoptive parents, working in their German restaurant, invisible to one and all. She owns and runs a salvage company. She's even got a handful of employees of her own. And she's moved out of her folks' house and into a converted church bell tower. It's drafty. And the enormous old bell may crash down and kill her at any given moment. But it's home. It's hers. And life is looking pretty good for Posey. Until Liam Murphy moves back into town. When she was 16 years old, Posey had the mother of all crushes on the bad boy biker from the wrong side of town. No one knew, of course. And Posey herself didn't realize until now that she never quite got over Liam when he left Bellsford, New Hampshire for college in California. Of course, he didn't go alone. And he hasn't returned alone, either. His wife (and hometown girl) Emma Tate passed away in the intervening years, and Liam has brought their 15-year-old daughter Nicole home to Bellsford, where he's set up a custom motorcycle shop. And, unwittingly, sent one Posey Osterhagen's well-ordered life into a tailspin. As you can imagine, mayhem, snark, and sizzle ensues. Not necessarily in that order.

Posey is my favorite Higgins heroine, and that's all there is to it. Not only is she the most complex, in my opinion, she also exhibits the largest growth as a character. Also in her favor--she never bored me or drove me crazy with her inability to call a spade a spade. I always sympathized with her plight, and I admired her drive to stand up for herself and be stronger than she used to be, no matter how many times her past rose up and tried to squeeze the life out of her. She did this, over and over, throughout the course of the book and in the face of parents and various and sundry town denizens who seemed hell bent on refusing to recognize her as an adult. Also in the face of Liam Murphy's considerable charisma. All in all, no mean feat. When she succumbed to her weaknesses, I understood why. When she called Liam out on his arrogance and assumptions, I applauded. Kristan Higgins is able to infuse her ostensibly quite light stories with an incredible amount of warmth and heart. I just buy the connections between her characters because they're laid out clothed in so much genuine emotion. In this case, I was particularly enamored of Liam's struggle with his overwhelming guilt, fear, and love for his daughter. His insecurities as a single father with a checkered past rang true for me and pleasantly balanced out what vestiges of his cocky teenage self remained. I also felt my heart thump in my chest for Posey and her struggle being so different from her adopted family as well as her sensitivity to Liam and Nicole's fragile little family. The emphasis on being seen for who you really are, despite the name you're given, the shape you hold, or the nature of your roots was decidedly a highlight. I thoroughly enjoyed this one, you guys. Gobbled it up, in fact. Until There Was You is right up there with All I Ever Wanted for my favorite. It's sweet, funny as hell, and everything I've come to expect from Kristan Higgins.