The Scorpio Races by Maggie Stiefvater 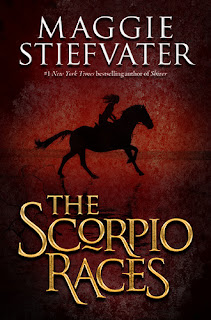 I love a good surprise. And Maggie Stiefvater pulled off an excellent one this year by surprising her readers with not one, but two books. The one we'd been expecting for a year, the other we had no clue was even in the works really. And so when the cover of The Scorpio Races was released, my mind went in a hundred different directions at once trying to parse out the possibilities behind such an interesting title and such an absolutely lovely cover. The truth is, I didn't want to know that much at all. This was a surprise book, and as such I wanted to go into the first page uninformed as to the particulars. So I stayed away from synopses, snippets, even the trailer (and I adore her trailers), because I didn't want to go in with any kind of preconceived notion. Unable to attend BEA this year, I bemoaned the fact that I would miss out on the stacks of ARCs I knew would be available there. Fortunately, someone who knew I would be suffering went and picked me up a copy and popped it in the mail so I could get an early sneak peek.


It is the first day of November and so, today, someone will die.

Sean Kendrick knows this truth only too well. It forms the fabric and the boundaries of his life. He races in the Scorpio Races every year and, for the past four years, he's come home the victor. More importantly, he's lived to race another day. Not everyone can say the same. Puck Connolly is racing for her first time this year. It's not so much by design as by way of keeping her older brother Gabe from leaving them. It's been just the three of them for years now, and Puck and her younger brother Finn can't fathom how they will go on without Gabe there to look after them. And so it's the races for Puck. If she puts her life on the line by entering (the first girl ever to do so) perhaps her older brother will think better of leaving and starting a new life on the mainland. Because the Scorpio Races aren't even remotely like your average horse race. In the Scorpio Races, the riders ride the dreaded capaill uisce--deadly water horses thrown up (or caught) from the sea. Faster, bolder, deadlier than any normal horse, they will kill you as soon as look at you. And Sean Kendrick is the only man around who is able to control them. If you can call it that. He has a way with them, can whisper in their ears, and anticipate their thoughts. And so these two young people are linked together by the races, by the fact that the capaill uisce took the lives of their parents, and by a spectacular love for horses and for the island that is their home.

How to begin, how to begin? I'm just going to go ahead and go on record as saying The Scorpio Races is the best book I've read all year. On top of that, I think it's Maggie Stiefvater's best book yet. Some of you won't agree with me, because this is a very different book from her others. And, as much as I've enjoyed each of them, I love that it is so very different. Where her other novels read like fiery fugues and romantic sonatas, The Scorpio Races is a quieter, more atmospheric piece. There's a charming vagueness as to time and place, leaving various and sundry particulars deliciously up to the reader's imagination. This timelessness extends to the earthy characters, the mythology of the water horses, and the almost elegiac tone. There is romance, and rest assured, it is of the very highest caliber indeed. But it is an altogether more restrained, more gradual affair, as befits the principle players. In fact, everything about this novel develops slowly and at its own wonderfully meandering pace. There is violence, passion, anguish, and ever-present danger, but they are a part of life to these characters. The harsh, beautiful, unrelenting environment is reflected in the faces and on the palms of every one of them. How could I not love this book? I fell under its spell without even noticing it. The language, as is always the case with Maggie's books, is enchanting. But even that, this time, is blended more seamlessly into the tale as a whole. Into the feel of the island, the weather, the waves, all of whom felt like characters to me. Into Puck and Sean Kendrick, Finn, George Holly, and Tommy Falk of the pretty lips. Here, a representative exchange between Puck and Sean Kendrick:


"Your brother is going to the mainland," Sean says.

I hold my breath in my mouth for a long moment, and finally say, "Right after the races." There's no point in treating it as a secret; everyone knows. He already heard me talking about it with Gratton in the truck.

"And you're not going with him."

I'm about to answer he didn't ask but I realize before I do that that's not the reason, anyway. I'm not following him because this is home, and everywhere else isn't. "No."

The question infuriates me. I demand, "Why is it that going away is the standard? Does anyone ask you why you stay, Sean Kendrick?"

"The sky and the sand and the sea and Corr."

It's a lovely answer and takes me entirely by surprise. I hadn't realized we were having a serious conversation, or I think I would've given a better reply when he asked me. I'm surprised, too, by him including his stallion in his list. I wonder if, when I talk about Dove, people can hear how I love her the way that I can hear his fondness for Corr in his voice. It's hard for me to imagine loving a monster, though, no matter how beautiful he is. I remember what the old man said in the butcher's, about Sean Kendrick having one foot on land and one foot in the sea. Maybe you need a foot in the sea to be able to see beyond your horse's bloodlust.

"It's about wanting," I say eventually, after some considering. "The tourists always seem to want something. On Thisby, it's less about wanting, and more about being." I wonder after I say it if he'll think I sound like I have no drive or ambition. I suppose in comparison to him it must seem that way. I seem at once cursed to say precisely what I'm thinking to him and unable to tell what he thinks about it.

He says nothing at all. We watch the horses mill and surge below us. Finally, he says, not looking at me, "They'll still try to keep you off the beach. It won't have ended last night."

"I don't understand why."

"When the races are about proving something about yourself to others, the people you beat are as important as the horse you ride." His eyes don't leave the piebald.

"But that's not what they're about for you."

Sean pushes up to his feet and stands there. I look at his dirty boots. Now I've offended him, I think. He says, "Other people have never been important to me, Kate Connolly. Puck Connolly."

I tip my face up to look at him, finally. The blanket falls off my shoulders, and my hat, too, loosened by the wind. I can't read his expression--his narrow eyes make it difficult. I say, "And now?"

Kendrick reaches to turn up the collar on his jacket. He doesn't smile, but he's not as close to frowning as usual. "Thanks for the cake."

Then he strides off across through the grass, leaving me with my pencil touching my paper. I feel like I've learned something important about the race to come, but I've no idea how to write it down.

It's such a beautiful story. Ponderous, yet filled with bright dots of humor here and there, it moves, strums, and throbs through you with a feeling of ancient inevitability. The Scorpio Races feels like a throwback to the fantasy novels I read as a girl, which still seem, somehow, so much realer than everything else. There were a few pages so perfect, I simply stopped and held them in my hands. Like the island of Thisby, this book will take you, if you let it. Recommended utterly without reservation, especially for fans of The Blue Sword and Fire.

The Scorpio Races is due out October 18th.

The gorgeous trailer once more for your viewing pleasure. Having read the book now, I can tell you this trailer is just like this book--perfect.
Linkage
The Book Stalker Review
Coffee & Cliffhangers Review
Feeling Fictional Review
Fluttering Butterflies Review
Letters Inside Out Review
The Reading Zone Review
Throuthehaze Reads Review