Untying the Knot by Linda Gillard 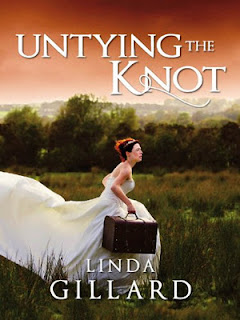 I love this cover. It has all kinds of interpretations once you've read the book, and I've enjoyed contemplating all of them after the fact. Linda Gillard's novels have become comfort reads for me when I'm looking for quietly moving stories with a hefty amount of substance to match the touching moments. I would not categorize any of them as "cozy" reads. There's far too much pain and history in them for that. Rather they are meaningful and full of thoughtful explorations and characters whose feet are a bit more rooted to the ground than you sometimes find in similar novels of a lighter nature. Having read and loved Ms. Gillard's first self-published novel House of Silence, I was nothing but excited when I heard she had another coming out just a few short months later. On an only slightly related note, do you ever bemoan the fact that you've never had the chance to run hell bent for leather through a field in a wedding dress? It just never occurred to me on my actual wedding day, and now I'll never know if it's as headlong and romantic as it looks on covers such as this one. Alas.

Fay left her husband. But then he left her first. And so sometime around about the hour of his greatest need, Fay checked out. Unfortunately for the two of them, it turned out to be the hour of her greatest need as well. They neither of them were up for supporting the other through their particular trials. Not anymore at least. And after more than a decade of marriage as an army wife, Fay can barely hold herself together, let alone her husband Magnus who suffers from severe PTSD after being invalided out of his career in bomb disposal. And so she calls it quits, saying farewell to the guilt, the bewilderment, the talking her husband off a ledge on a regular basis. And she moves into their apartment in Glasgow and starts a career as a textile artist. Their daughter Emily chooses to stay with Magnus in the crumbling tower he purchased with the lofty intention of restoring it to its former glory. And life goes on. Then several years later, Magnus attends one of Fay's exhibits and the whole messy business rears its ugly head. Emily is getting married. So the estranged couple is forced to act polite and attend the requisite functions. Despite her reservations about Emily's choice, Fay believes she's up to the task of playing mother-of-the-bride. What she may not be up to is the task of watching Magnus get married, too. But then Magnus may not be either . . .

Linda Gillard's books always make me feel. They make me feel more than I expect to and in very different ways than I think I will. In short, they're more than meets the eye in the very best kind of way, and they surprise you even when you think you have a handle on the author's style. I absolutely loved where Untying the Knot began. Two people in a room with such back story between them it fills the air with so much regret and uncertainty you could choke on it. Then it goes and unfolds so very slowly that you're half in love with Fay and Magnus before you even realize just how exactly and in what particular order the components of their marriage came apart at the seams. But by that time you love them, and you're not willing to condemn either party for what happened. Not until you find out the cold, hard facts. And, of course, even as you're waiting, you hope against hope they'll be able to reconcile, that they'll wake up and realize they're still in love with each other and can somehow live together again. It's a tall order, all those feelings. And Ms. Gillard admirably resists the easy path. And the cold, hard facts. Because though the ancient stones of Tullibardine Tower are both cold and hard, what lies between Fay and her ex-husband is not. It fairly seethes with life, messy and unfinished. The road to redemption is painful at best, and I felt a bit wrung out by the final pages, almost wishing it had resolved a bit sooner. The ending felt just a bit off. Both slightly overdone and anticlimactic at the same time, as if it were trying to atone for making its appearance so late in the game. This may just be my own lack of stamina, because it was the only complaint I had of a novel filled with beautifully thorny relationships, true love, not a little bit of hysterical humor, and that lovely writing I've grown so fond of from Linda. The truth is I will read anything she writes, and that's all there is to it.