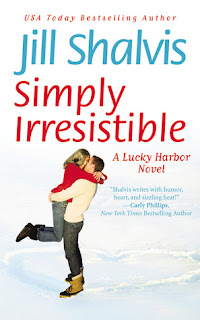 I'm pretty sure I ran across Jill Shalvis as part of a list of recommendations for people who enjoy Kristan Higgins books. As that would very much be me, I decided to investigate the matter. And you know what? The woman has written an absolute crap ton of books! Where to start, where to start? I finally settled on the first book in the Lucky Harbor series, Simply Irresistible, as a nice little point of entry. I was encouraged by the fact that the covers and titles for this series feel like they hail from the chick lit end of the romance spectrum, and I still feel like I'm getting my feet wet, so to speak, when it comes to those genres. Several people I trust on Goodreads seemed to be keen on it, which is always a plus and an excellent indicator of where I'll fall, so hello Lucky Harbor it was. Well, I made short work of the three books currently out in this series, and I'm happily awaiting the next three on the horizon. In retrospect, I think this series is definitely a good fit for Kristan Higgins  fans, if a bit higher up on the heat scale.

Maddie Moore is on the road to the small coastal town of Lucky Harbor, Washington and not at all sure how she feels about it. Recently sprung from both a relationship that was demolishing her and a job that was keeping her afloat, she is understandably torn over recent developments. Breaking it off with her "boyfriend" (I use the term with extreme disdain) was the hardest thing she's ever done. Leaving L.A. was a close second. But when the news came that she (along with her two half-sisters Tara and Chloe) had inherited a moldering old inn up in Lucky Harbor when their mother passed away, Maddie thought it just might be a sign. That her life had a new direction. That perhaps she might be able to reinvent herself after all. That is if she can convince her somewhat estranged sisters that they shouldn't sell the place on the spot, pocket their thirds, and head for the hills. Fortunately, she runs into a general contractor on her way into town who might be able to help with the major rehabilitation the inn will need in order to convince her sisters it's worth their time and money spending a little more of both in Lucky Harbor than they planned. Maybe even putting down some roots and see if they take.

Cute. Very cute is the way I'd describe Simply Irresistible. Maddie and I got on right off the bat. She forms the sensible, forthright center of the trio of sisters, and she made me feel grounded while I laughed and shook my head at Tara and Chloe's respective charisma and antics. I enjoyed mapping their widely disparate histories, as Maddie and Tara both grew up with their fathers, leaving Chloe the only daughter to actually spend any time at all with their wild and inconstant mother. Sandwiched in between her livelier, more colorful half-sisters, Maddie often gets overlooked and shunted to the side. But she is definitely the heart of the girls and the story. And I was pleased to see her push her way to the fore from time to time, carve out a little place for herself, and face up to her past. With the help of a little added purpose in the form of the inn and the admiring eye of Jax Cullen. Jax is a general contractor, among other things. He has his hand in a lot of Lucky Harbor pies, a past to match Maddie's for pain, and a good eye when it comes to character. Jax and I got on just fine. Here's one of the exchanges between Maddie and Jax that, well, it made me giggle:

Again, he lifted her face, and he smiled. "The tool belt turns you on."

"No." She closed her eyes and thunked her forehead to his chest. "Little bit."

So basically I waltzed my way through this introduction to Jill Shalvis and ended our first encounter with a heart as light as one of Tara's muffins.

For what it's worth, after reading (and enjoying) all three books, Simply Irresistible remains my favorite. I think that's because, while I really liked Tara and Chloe, Maddie and Jax remain the ones with the kind of gravitas that works for me. It's the one that I want to have on my shelf for those nights when something cozy is in order. For what it's worth.