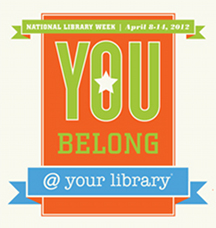 It's National Library Week, you guys! Time to get to your library, take part in events going on around the nation, and support your local libraries and reading in general. It's also time for the ALA to release the list of Top Ten Frequently Challenged Books of 2011. And here they are:

10. To Kill a Mockingbird, by Harper Lee

I've read 6 of the ten (yay me!) and have my usual pfft! to say in response to their being challenged. I also find it hilarious that The Hunger Games trilogy is challenged for being anti-family. 'Cause if there's one thing that Katniss hates more than President Snow, it's her family.

The fact that To Kill a Mockingbird is challenged for racism? There really are no words.