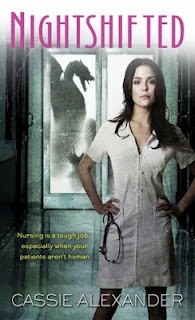 The great thing about reading is that books always surprise you no matter how long you've been reading them. You think you know an author or a genre or a style, and then they go and rip the rug right out from under your feet. Sometimes I'm going along, doing my thing, reading my books, and then I pick one up and realize it's what I've been starving for. I love a good urban fantasy. Ever since Sunshine. Ever since I made the acquaintance of Mercy Thompson. I've loved the real deal. And when I fall, I fall loyally. I look forward to the new Mercy and the new Kate religiously each year. But it's been kind of awhile since I sank into a brand, spankin' new one that really did it for me, you know? In fact, I'm pretty sure it's been a couple of years. Gah. There's so much paranormal stuff out there (some of it excellent, some of it not so much) that I often find myself longing for some true urban fantasy. So I was kind of surprised and kind of excited when I found myself gravitating toward Cassie Alexander's upcoming Nightshifted before I even knew very much about it. Something about the girl on the cover and the silhouetted dragon through the hospital doors behind her said good things lie inside. And wouldn't you know? It was the one I was starving for.

Edie Spence is the new nurse on Y4--the paranormal ward at County Hospital. The one no one knows about. Edie wouldn't have a clue either except the mysterious Powers That Be stepped in to save her druggie brother from ODing. But their continued intervention on her brother's behalf comes at a price . . . namely Edie's unquestioning (and indefinite) service on Y4. Edie's worked in some holes, but this one takes the cake. From her indeterminate gendered supervisor Meaty to the lengths they go to to disguise the true nature of their patients in nightly reports, nothing about nursing school prepared Edie for catering to a steady stream of vampires, weres, shifters, zombies, and the like. But despite the fact that she's all but washed her hands of him and that he's done everything he can to mess up her life and his own, Edie still loves her brother. Besides. She's always flown solo. It's not like her life was all that social to begin with, so what's a few more hours spent with the dead than the living anyway? But then a random vampire dies on her watch, and newbie Edie finds herself unable to forget him or the words he whispered before crumbling into dust in her hands. Before she knows it, she's tracking down the vampire he mentioned in an attempt to set things right. But what she finds is so wrong it quickly bleeds over into Edie's life and turns it upside down.

Nightshifted is exactly what I was looking for--a true urban fantasy. It's gritty and dark, its heroine jaded and tough, and both of them are studded with moments of humor and human frailty. Edie is no superwoman, and her very normal skills are not always up to the paranormal requirements placed upon her in order to survive. But she is scrappy. And fiercely independent. And very much not inclined toward self-pity. Which is to say I liked her right away. But I wasn't always sure she would survive her story, as pretty  much all the creatures that go bump in the night make appearances at one point or another. And while a few really nasty versions of vampires play a large role in the book, I liked that they weren't the sole focus. In fact, my favorite character besides Edie turned out to be a zombie that I developed a bit of a crush on. I'm pretty sure that qualifies as a first for me, but I'm thinking I'm not gonna be the only one who feels that way. Because as zombies go, this one is pretty charming. Witness an interaction early on (taken from my uncorrected ARC):


The next night, I was finally assigned the gentleman in room five. I got the report and then looked at the chart myself. He was a zombie . . . firefighter? That was a bit odd. We'd only had two zombies on the floor while I'd been here--Mr. Smith was the second of them, and I'd never been assigned the first.

But I had a mission tonight, above and beyond mere nursing. I needed to get more blood. I walked into the darkened room, tubes in hand. If I got his blood now, I could toss it in my purse on break. The monitor was still in standby, casting a faint glow over him where he lay on the bed. I knew what smelled different about this room now, it was the scent of warm earth.

He smiled in the dim light. "Hello again, ghost nurse."

I snorted. "Well, neurologically, you're intact. Mind if I turn on the light?"

My hand found the switch and I got my first look at a real live--dead?--zombie.

Mr. Smith was tall, stretching almost the entire length of the bed, with wide shoulders. The parts I could see of him outside of the sheets and his hospital gown--his arms, his neck, and his face--were all covered by almost-healed smooth rippling scars. Between the dark color of his skin as it was and the slightly lighter color of his skin as it healed, he looked like a dark pond on a windy day.

"I remember you," he said. His eyes were a light golden brown, and the skin around them crinkled when he smiled.

"I remember you, too." I smiled back. "Thanks again--and sorry for waking you up."

"I don't really sleep." He sat up straighter in his bed. As I walked into the room I formed my plan. I would do the blood draw last, so I could hurry away and hide. I hadn't heard about any IV sites, but I had a butterfly needle for the draw. I didn't really like poking someone unnecessarily, but it wasn't like he could get an infection and die from a needle stick now, was it? I reached for the blood pressure cuff, to start my set of vitals, and held it aloft. "Which arm?" I asked. A lot of patients with heavy scarring had a side they preferred, one which the cuff's squeezing hurt less.

Faint eyebrows rose. "I believe the previous nurse was having you on."

"I don't have blood pressure." The corners of his lips quirked into a smile. "I have blood, but to the best of my knowledge, it doesn't really go anywhere."

"Oh." The lab tubes in my pocket felt heavy, and I felt my face flush. "Damn."

"You were . . . looking for some?" he asked, tilting his head forward.

"Actually, yes. Sorry." I frowned at myself. How was I going to get Anna to come closer tomorrow night, when I was off-shift again

And the romantic subplot manages to be quite nice without overwhelming the story or impeding the world building. But what I ended up loving best about Nightshifted is how real it felt. My favorite urban fantasies are unvarnished. They highlight their humanity by scoring it against a background of the supernatural. They plunge me into a world already seething with life and magic and danger. They take over the city they're set in, so much so that I begin to feel as though I live there, too. Nightshifted hit all of these buttons and more, capping it off with a final line that made me want to fist bump Edie in solidarity. The promise of a sequel to look forward to is music to my ears.

Nightshifted is due out May 22nd.