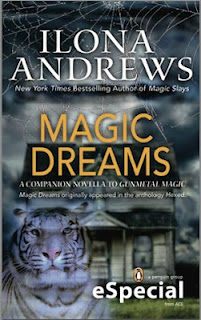 Though I read and very much enjoyed the Ilona Andrews Andrea & Raphael novella in Must Love Hellhounds, I somehow never got around to reading the Hexed anthology. This was tragic on several levels, mainly because the Andrews novella included in that volume was the Jim and Dali story. I have been salivating over those two for what feels like forever now, anxiously crossing my fingers they would get their own book. And yet its inclusion in that antho somehow escaped my knowledge. This is why I got all giddy when Magic Dreams was re-released last week, this time as an e-special. My nook and I clasped our hands in joy and then set about curling up together with one seriously gruff werejaguar and one smartypants weretiger. I've been extremely curious as to Jim's actual feelings on the small-package-good-things-come-in Dali, so it was with absolute relish that I devoured this 86-page treat.

The alpha of Clan Cat and leader of the Beast Lord's security force is a force to be reckoned with, albeit a strong silent one. That's why Dali tends to opt in favor of flying under his radar whenever she possibly can. The hydra-sized crush she's been nursing doesn't even come into it. Even if she wasn't almost legally blind, Dali can see from his actions Jim has little interest in her professionally and even less romantically. Why would he? She doesn't eat meat. She can't see properly. She's scrawny, ugly, and disobedient. And so like any self-respecting weretiger, she drowns her sorrows in fast cars and dusty magic. Until one day Jim comes in search of help. From Dali. Fast falling under what appears to be a grave curse, Jim is in need of some serious magical aid. The kind Dali is uniquely equipped to provide. The two set out to find what or who is behind the force sapping Jim's formidable strength. Dali knows how smart she is, but she has no illusions as to her strength. And if Jim is out of commission, she may be crushed like a tiny bug before she has a chance to outwit the villain.

Okay, first things first, who knew Jim had a last name? Shrapshire?! I love it. I love all the last names in this series. They are always at once surprising and perfectly fitting. I mean, Jim Shrapshire and Dali Harimau? Genius. What's even more genius are the paces Ilona Andrews puts these two myopically challenged characters through. Having spent five books' worth of time with Jim, it would be an understatement to say that I was eager to peel back a few of the layers surrounding him. Ever since his merc days with Kate, Jim's taken himself so seriously he can hardly unclench long enough to appreciate a good sandwich let alone a girl like Dali. But he's been through a lot, has Jim. He doesn't allow himself breaks. There's little of peace or beauty in his life. As for Dali, it was impossible not to like her from her first appearance in the series. She burst onto the scene all erratic and intelligent. Her cursework saved the Pack's bacon in the Midnight Games. And she's refreshingly different from both Kate and Andrea. I love her for how unapologetically smart she is and for how willing she is to walk into fire for those she cares about. The notion that the buttoned up, lethal chief of security and the booksmart, loveblind white tigergirl might find some common ground tickled me down to my toes. A favorite passage early on showing just how awesome Dali is:


Kasen nodded at the Mustang. "That's your second crash in three weeks."

"Didn't Jim forbid you to race?"

Jim was my alpha. The shapeshifter Pack was segregated into seven clans, by the family of the animal, and Jim headed Felidae with a big Jaguar paw hiding awesome claws. He was smart, and strong, and incredibly hot--and the only time Jim noticed my existence was when I made myself into a pain in the ass or when he needed an expert on the ancient Far East. Otherwise, I might just as well have been invisible.

I raised my head to let Kasen know I meant business. "Jim isn't the boss of me."

It's good that I wasn't a wereporcupine, or his mouth would be full of quills. "Are you going to snitch on me?"

"That depends. When you die, can I have your car?"

Kasen sighed. "I'm trying to make a point here. I've been watching this race for six years now and I've never seen anyone crash as much as you. You're my number-one customer. You can barely see, Dali, and you take stupid chances. No offense."

No offense, right. "No offense" stood for "I'm going to insult you, but you can't be mad at me." I bared my teeth at him. When it came down to it, he was a rat and I was a tiger.

Their first official story was everything I hoped it would be. Magic Dreams really brought to my attention how fond of Jim and Dali I had become just following them as side characters in someone else's story. And that, I believe, is the mark of a superior storyteller--that ability to nurture your readers' affections for not only the larger-than-life protagonists, but for the supporting cast as well, from integral cog to maverick nut or bolt. My affections were engaged, my attention riveted. Magic Dreams satisfies on every level. More, please.


Linkage
Bunbury in the Stacks review - "Magic Dreams easily captured the roll of my favorite novella thus far in this series."
Yummy Men & Kick Ass Chicks review - "I was in a bit of a funk after a particularly tough day and picked this up and read it in one sitting."