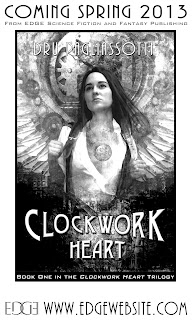 So I read and fell in love with Dru Pagliassotti's Clockwork Heart back in 2008 when it was first published. I've followed Ms. Pagliassotti's blog ever since, anxious to see what she would write next. I was surprised and delighted to hear she was at work on a sequel. Even though it's perfectly lovely as a standalone, it's also one of those instances where I will always be up for spending more time with these characters. And definitely in this world. From page one, I was enamored of Ondinium, its elaborate social strata, and its gorgeous steampunk trappings. And I just never get tired of the phrase "metal-winged icari." So it was with all kinds of excitement that I saw this ad for the trilogy, to be published by EDGE. They're republishing Clockwork Heart in March of next year. It will be followed by the second book in September and the final book in the trilogy the following March. Word is they're keeping artist Timothy Lantz on to do the covers for both sequels, which thing maketh me exceedingly happy as the original cover has long been one of my favorites.