Bibliocrack Review: Nine Rules to Break When Romancing a Rake by Sarah MacLean 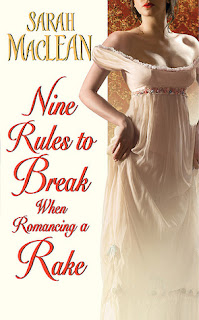 I say the first review of the year should be a fun one. So here you have it! I wasn't sold on Sarah MacLean's young adult novel The Season. I may have encountered it at the wrong time amid a slew of Cybils titles or some such, but it wasn't a standout for me. I think I wrote her off at that point, a fact of which I am not proud. But so many books, so little time and whatnot. The thing is, I just kept watching readers I know and love swoon their ever-loving minds out over her adult historicals (see reviews below). Somewhere, in the back of my mind, I took note. I didn't act, but I did take note of all these promising reviews and raves. Then I went and became a fan of all things Courtney Milan, and suddenly I was in the market for some really well done Regency stuff while awaiting the next in Milan's Brothers Sinister series. And so Ms. MacLean came to my attention once more. I sifted through ecstatic Goodreads reviews, and finally decided to go ahead and ignore the silly title and somewhat imperious bosom on the cover and give Nine Rules to Break When Romancing a Rake a fair shake.

Callie is finished. Officially relegated to the shelf at the ripe old age of 28, she has put in her time. And she has had enough. Enough of being the sensible older presumptive spinster. Enough of never indulging in a single thing. Her younger sister Mariana is fresh off her triumph of landing both a duke and a man she loves in one fell swoop. And Callie is happy for her. She really is. It's just that before she's packed off to the country and handed a pair of knitting needles, she'd really like to have experienced . . . something. A number of somethings, come to think of it. And so she makes a list. A list of just a few choice accomplishments she can tuck under her belt and take out and admire when the boredom of spinsterhood becomes too onerous. Then she'll retire gladly to the shelf. She really will. Of course, actually checking a few of these items off her list is going to require some fancy footwork, to say nothing of a little help. From a person of the male persuasion to begin with. Which is how Callie finds herself, one dark and stormy night, at the home of the notorious Marquess of Ralston. She knows very well how much she risks merely being in the same room as Ralston, let alone importuning him for a kiss (her first). But the thing is, if she doesn't try to take this one small thing now, she may never have the chance again. Then again, if she does, who knows where it might lead?

I fell hook, line, and sinker. This is one of those bright books that gives you something to look forward to all day long. While you're going about your daily tasks, from one ordinary chore to the next, it hovers there in the back of your mind and in the pit of your stomach, just waiting for you to return and slip back into the delightful swing of things. I couldn't stop a silly grin from creeping over my face whenever I thought of it, of Callie and Ralston and their lovely dance. Sarah MacLean has clearly found her true calling writing ridiculously charming historical romances. Not only am I just incredibly glad I found my way to them, but I'm signed up to read whatever she writes. Her characters and her writing are smart, light, and the opposite of self-indulgent. There's so much affection in this novel, it fairly leaps off the pages--affection for the time period, for the genre, for the two characters so unexpectedly caught in each other's wake, and for the readers themselves. Reading it is like participating in one giant romp through all that is good and amiable in Regency England and in the historical romance genre itself. I love so many things about it, but the main reason I love it is Callie.


"Oh, Callie-mine," Anne said, her voice taking on a tone she'd used when Callie was a little girl and crying over some injustice, "your white knight, he will come."

One side of Callie's mouth kicked up in a wry smile. Anne had said those words countless times over the last two decades.

"Forgive me, Anne, but I'm not so certain that he will."

"Oh, he will," Anne said firmly. "And when you least expect it."

"I find I'm rather tired of waiting," Callie laughed half-heartedly.

She's beset on all sides, Callie is. From her society and her rank to her unsuitable suitors and her purported lack of desirable qualities. It's hard not to admire her resolve and impossible not to applaud her attempts at embarking on a life of adventure before it eludes her grasp for good. Ralston, too, secured my loyalty, not only by recognizing gold in Callie, but by pressing to get to know her better, to be someone who did not disappoint her. The two of them made each other laugh (they also enraged each other at times). But they laughed together. Best of all, they engendered honesty rather than deceit in one another. And they had so much fun doing it. It was quite beyond me to resist their wholly genuine charms.

Linkage
The Crooked Shelf - "I suggest only reading this book when you have hours and hours to read, because I am telling you, real life just kind of fades into the background where this book is concerned."
Good Books and Good Wine - " . . . my cheeks hurt from smiling so hard."
Life After Jane - "There’s nothing silly about her characters, they are well defined and immediately lovable."
Medieval Bookworm - "It’s fun, it’s witty, and it’s absolutely, indescribably romantic."
Paperback Dolls - "I was beyond pleasantly surprised."
Rakehell - "Ralston and Callie have a lot of hidden depth for a book as fun as this one."
Romance Around the Corner - "This is a case of well-deserved reputation."
Smart Bitches Trashy Books - "This is one of those unputdownable books for me."
Ticket to Anywhere - "Nine Rules to Break is more than just your typical romance novel though its a journey of self discovery and about accepting one's self for who they are."