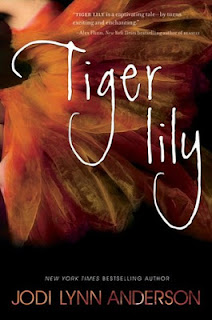 This is both my first Jodi Lynn Anderson book and my first Peter Pan retelling! I know there are quite a few out there, but for whatever reason I just haven't dipped into that pool yet. I've seen and enjoyed multiple screen adaptations, but this was my first outing with a retelling on the page. The thing about Peter Pan is that I read it a couple of years ago with my oldest boy and it was . . . rather devastating, actually. In the very best way, of course. But the emotions were real and they cut deep. So I probably should have expected to be a bit wrung out upon finishing Tiger Lily. Because even though it's all about Tiger Lily (and is told from Tinker Bell's perspective), it's about Peter, too. And Neverland. And the Lost Boys. And Hook. And every other excruciating bit of that original story that so embodies the sense of wonder and loss endemic to childhood and growing up. All of which is to say that beyond this point there be emotions. Proceed with caution.

Tinker Bell remembers the exact day on which she met the girl called Tiger Lily. She remembers it so clearly because she'd never seen anyone that outside, that tenacious, that determined to forge her own path. Ostracized for her differences, Tiger Lily's only friends are her adopted father (the village shaman) and a pair of mismatched outsiders her own age who are inexplicably drawn to the caustic girl. But ever since that fateful day, Tink has stuck by Tiger Lily's side. Entranced with her life and energy and isolation, the tiny faery unexpectedly finds a kindred spirit. Able to listen in to Tiger Lily's thoughts and feelings, Tink knows better than anyone just how hard she works every day just to stay inside her own skin. And then one day, she accompanies Tiger Lily on what seems a normal outing. But in the course of a single afternoon, she watches the determined girl spare a killer's life and take her own life in her hands as she stumbles across the infamous Peter Pan. And thus begins an intense and unlikely bond that will shape the lives of both the human girl, the faery, and the boy who would not grow up.

It starts with a Walt Whitman quote, which is so often guaranteed to garner my attention and admiration. From the opening of the prologue, Anderson's writing shored up any lingering questions I had in my mind about how this book and I would get on. As a matter of fact, this book and I were immediately inseparable. I may be particularly susceptible to this story's charms, but given the level of beauty Ms. Anderson's writing achieves, there was simply no way I was not going to be enthralled by a revisionist version focused on the girl(s) who came before Wendy. It was, of course, genius to have Tinker Bell tell it. And the friendship between the two girls is one of the highlights of the whole dark, exquisite story. At first blush, neither of them are incredibly endearing. Prickly and headstrong and inveterate loners, they resist advances from both their peers and their readers. But it didn't take long for me to appreciate Tiger Lily through Tink's eyes. And no time at all for me to sympathize with her impossible situation and fully support her attempts to escape the bonds restricting her. Peter was such a perfect avenue for that. His feral joy, his hidden vulnerability, his wordless understanding of and refusal to accept his world all worked their magic on the strong women who found their way to his burrow. Peter and Tiger Lily's version of first love mirrors the two of them. It is a wild, joyful, and vulnerable creature, at once wondrous and painful to witness. Tiger Lily is composed of layers upon layers of love stories, each one tiny and perfect and desperately flawed. Here, my favorite passage featuring Tiger Lily and her adopted father Tik Tok as they confront the issue of an unwelcome arranged marriage:


He sighed. "It's not your fault. It was my selfishness. I didn't have the courage to leave you in the woods. But I should have let someone else have you . . . one of the other tribes," he said. He leaned down onto one palm as, with the other, he yanked a root from the ground and brushed it off. "I could have told you. But I didn't want you to live under a shadow. I never held you back from anything."

Tiger Lily was silent for awhile, her long, dark hair falling across her face, obscuring her expression, and Tik Tok stared at the root in his hands. Finally she reached for his fingers. "I'm glad you took me. It's just a husband. Maybe it won't be terrible."

Tiger Lily shook her head. "You have. I'm okay. Really, Tik Tok." Secretly, Tiger Lily knew it was her job to protect him too.

Tik Tok smiled, but his eyes became wet. His shoulders sank, and he steadied himself where he knelt over a patch of bitter gourd.

She reached for his arm. "I'm not so little. I can take care of myself."

"Yes, I know." He frowned. "But you shouldn't have to. You should have someone to love and take care of you. Not like him."

Tiger Lily didn't want someone to take care of her. But I heard the longing in Tik Tok's heart too, and the loneliness of being such a singular type of person, without another like himself to hold at night. He didn't want the same for his daughter.

You see? In fact, each love story in this book is so sensitively handled that I couldn't choose my favorite. I like their unexpectedness and how they wind up in places you didn't see. And they are each highlighted by the quiet ways in which they echo and play with their original counterparts. But as far as friendships go, my favorite is Tiger Lily and Tink's. Subtle as it is, what distinguishes it is how consistently they (individually and collectively) buck being tied down. To family, to life, to their own fears, even to Peter. Infatuation, passion, true love aside, their integrity doesn't waver. Even in the face of despair and all the years ahead. And if this Tinker Bell was a little more serious than I expected and this Tiger Lily a little more unbridled and fierce, well, that only made me love them more. I choked back tears more than once and, as in the original, the ending is fragile and aching and right.

Linkage
Books Take You Places - "I found the book to be so brilliant."
Early Nerd Special - "Anderson is at her best with this most recent offering."
Emily's Reading Room - " . . . each word was so very carefully placed."
Good Books and Good Wine - "Tiger Lily is a book permeated by a melancholy mood."
Ivy Book Bindings - "I've fallen in love with this story."
Jess Hearts Books - "This book has a strong and imperfect heroine, a beautiful love story, and a dash of magic."
Makeshift Bookmark - "It made me feel feelings I had forgotten."