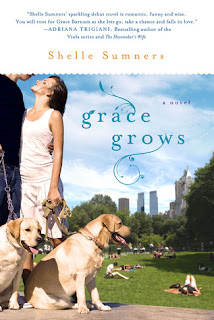 I received a pitch for this book a few months back and dithered around on it a bit before deciding to give it a shot. But I had to wait, of course, for the right moment. And that moment came the other night after putting everyone to bed and coming off a rather unsatisfying read the night before. It helped that I haven't really read any true chick lit for awhile. What didn't help was the cover and the title. Nope. Not representative of the book at all, as far as I'm concerned. So if you're put off by either, don't leave yet. Because I settled in with Grace Grows and did not surface again until I had finished it. The thing is it made me laugh right off the bat. In fact, I'd read a passage aloud to my husband before I was three chapters in--a sure sign I'm enjoying a book immensely. If he has to hear a bit of it aloud as I am reading it, then he knows I'm in it for the long haul. Turns out Grace Grows is so readable and engrossing that the "long haul" felt very short indeed. That's not to say that it's without its problems. On the contrary, it has it's fair share. But I haven't been able to get it out of my head since finishing. So let's discuss the highs and lows and see where we wind up, shall we?

Grace Barnum (yes, like the circus) is comfortable. She has a live-in boyfriend she's been with for awhile now. She has a job that keeps her busy and a pleasantly distant relationship with both of her parents (who have been estranged ever since she was a little girl). She has friends to go out with on the weekends and time to herself to sit in the Cloisters and recharge her batteries, so to speak. Everything's fine. Really. But then one morning on her way to work, she meets a dog walker outside her building who changes everything. Or wrecks everything. It all depends on your point of view. But one thing is for sure, this sometime dog walker, full time up-and-coming musical sensation has no intention of exiting Grace's life. Which presents problems on several levels for peace-and-quiet-loving Grace, because she can't seem to let go of their . . . friendship . . . either. And it's messing with her mojo, seeing as Ty is as chaotic and charismatic and fun-loving as Grace is steady and quiet and set in her ways. But Tyler Wilkie is dead set on two things in his life: getting famous and getting Grace. Which presents a problem for her nice, normal boyfriend who suddenly seems to be heading toward fiance territory. And so time passes and the two of them circle and reach out to each other and drift away and come together again in a kind of excruciating cycle neither of them know how to break. Until the strength of their connection forces them to act, that is. And then things get even more complicated.

Like I said, I started laughing immediately and didn't stop. Shelle Sumners has a wonderfully dry and lively wit and it sparkled in Grace's interactions with Tyler, with her friends and co-workers, and with her inexplicable parents. I cared for her right away. In fact, I cared about every single character in this book. They are each of them delineated carefully and thoughtfully, and while the bulk of my emotions were tied up in Grace and Ty's relationship, I was attached to each of the secondary characters as well. Which is why the whole messy, beautiful thing meant so much to me, I think. And why it was so clenchingly painful when the course of true love did not run smooth. And let me tell you, it really, really doesn't. I can understand why some reviewers want to kick Grace to the curb about two-thirds of the way through. She brings the pain, this girl does. She's been the recipient of her fair share of it as well, and for that (and her parents' dysfunction) I cut her some slack. But that doesn't mean it isn't difficult to watch her sabotage Tyler's happiness (and her own, of course) in such desperate ways. And since Tyler is about as adorable as a basket of puppies, it's . . . well, it's hard to watch. But the dream of them is so compelling, I did. I watched it right through to the very end.


I reached up and tapped him on the shoulder. He turned.

He gave me that radiant smile and the gawk factor inexplicably transferred from him to me. Suddenly he was grace, and I wasn't.

"You're shorter than this morning," he said.

"Oh, yes." My face was getting warm. Annoying! "I had on those tall shoes."

"Yeah, they were pointy."

"Yes, I was trying to--well, I don't usually dress like that."

He nodded. "It looked hot, but painful."

This, their second meeting, is an incredibly simple passage, I know. But it really does give you a feel for Ty's easy charm and Grace's awkward honesty when she's around him. There's no denying their chemistry. This is one of those protracted relationships. It develops over years. And nothing, but nothing, resolves when you want it to. Honestly, I did come to tire of the never ending passing like ships in the night. Similarly, I wish the plot point that finally forces them to act was not what it was. It took away from the payoff for me. I wish Grace had found the courage to take control of what lay between them without it, and I wish we'd been allowed to spend a little more time with Grace-and-Tyler before their fragile little entity was overwhelmed by life and the consequences of the long string of decisions (both bad and good) that brought them where they are. That said--I really cared, you guys. I really cared. It hurt reading this book. It hurt and tickled and irritated and delighted. Recommended for fans of Liza Palmer and Kate Saunders.

Linkage
The Allure of Books - "I was SO INVESTED in this story that it might have been a little unhealthy."
Dear Author - "This is a book that I didn’t want to put down or stop reading. But it’s also a book that I wanted to like more than I actually did."
The Readers Den - "I have to give a high rating to a story that claims my attention so absolutely."