Review: A Spear of Summer Grass by Deanna Raybourn 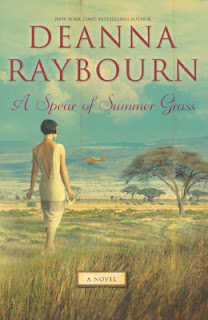 Have you ever seen Out of Africa? It's this old Sydney Pollack film starring Meryl Streep and Robert Redford, and it is sort of loosely based on Isak Dinesen's (pseudonym of Danish author Karen Blixen) autobiographical book of the same name. I ask because it (and its soundtrack) was a staple in my house growing up, and when I first read the brief synopsis for Deanna Raybourn's latest standalone novel, A Spear of Summer Grass, it was literally the first thing that popped into my mind. They just sounded fairly similar what with the same setting, though the time period is a good decade later in Raybourn's novel than in Pollack's film. Since I have fond memories of the movie as a girl, this only upped my eagerness to read the book. I get all excited when an author I love changes things up on her readers. I am a devoted fan of Raybourn's Lady Julia Grey Victorian mystery series and I thoroughly enjoyed her standalone Gothic novel, The Dead Travel Fast. As far as I was concerned 1920s Africa complete with a British/American flapper fish out of water could only spell bliss.

Delilah Drummond is a household name among the London and Paris socialite sets. Daughter of an infamous society wife in her own right, Delilah has worked her way through a few marriages of her own. Unfortunately, the latest crashed and burned so luridly that her mother and current stepfather have called Delilah home for a little Come to Jesus. In fact, they're packing her off to Kenya so she can cool her heels a bit while the scandal back home runs its course. It so happens her stepfather (the best in a long line of her mother's spurious husbands) has an estate called Fairlight on the Kenyan savanna. Accompanied only by her cousin and sometime maid Dodo, Delilah arrives at Fairlight to find the place crumbling around her feet. Determined not to let the man (or men) in her life get her down, she immediately starts issuing orders, procuring help from the local Africans in setting the manor to rights. It doesn't take long for the European expat social life to find Delilah and she is more than happy to dive into the swirling politics and pandering that involves. She even runs across a few old friends in the process, as well as encountering some new ones. Most notably a Canadian transplant by the name of Ryder White--a man as wild as the African wilderness he inhabits and one who just might be larger than life enough to measure up to Delilah herself.

I do love this setting and time period. And what a master Deanna Raybourn is at capturing the sights, tastes, and sounds of the worlds her characters inhabit. The descriptions of everything from the scrumptious clothes to the sweeping landscape positively drip with vibrancy. And the writing, as always, is exquisite. Where I ran into trouble was, oddly, with the characters. Delilah is hard as nails. She's as bright and devil-may-care as they come, and she has zero interest in anything that does not involve pleasure. Interestingly, that was not always the case. We are given a few meager hints that indicate a more sedate and driven past, one in which she married for love (for once) and worked as a nurse during the war. All that was smashed to smithereens, of course, and she is who she has become--a woman who barely resembles the girl she once was. Now doesn't that back story sound intriguing? Add to that the truly crushing details of her last marriage and the fallout it must have left somewhere inside her, and we have got ourselves a recipe for some serious character depth and development! The thing is . . . it never happens. I mean it rather dismayingly never happens. The bits of depth we get are distributed seemingly at random, in too small quantities, and in entirely the wrong places to maintain the thread and drive of Delilah's story. The result being that she is by and large wholly unsympathetic. Sort of monumentally callous and insipid, as a matter of fact. She dashes about her story taking pleasure where she will, heedless of the consequences, lifting her hand for a dubious good deed here or there, but more often intentionally risking her neck and courting destruction by toying with the caged lion that is Ryder. Who, by the way, I found little better than Delilah as far as his ability to secure any scrap of my affection goes. The potential was there on the grand scale. But somehow the decadence of Delilah's life and that of almost every other person around her completely overwhelmed the more subtle possibilities of her story. Her relationship with Dodo remained distressingly unexplored. The unfolding of the plot continued flat and unsurprising. And the crisis, when it came, failed to incite my sympathy given how little I cared for anyone affected by it. I finished it feeling tired out and sad. It could have easily gone so very differently. It's worth pointing out that while I can't recommend this one, it is the only misstep I've had from Raybourn, and I wholeheartedly recommend her other books, all of which are on my Beloved Bookshelf.

A Spear of Summer Grass is due out April 30th.