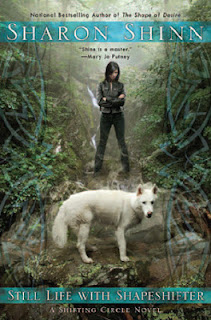 As you know, Sharon Shinn is an auto-buy author for me. Ever since the unparalleled experience that was me reading Archangel, I have been an unabashed fangirl. I have my favorites, but I read everything she writes because I love her ways with words and her way with worlds. Which was why I was so intrigued and excited to hear she was working on an urban fantasy series. She's done sci-fi, she's done high fantasy, she's done YA. It only makes sense she should find her way to one of my very favorite fantasy sub-genres and make her mark there. I read The Shape of Desire, the first book in her Shifting Circle series, right when it came out last year, and I've essentially been mulling it over ever since. And while my feelings for it were complicated and many, I knew I would be reading the companion novel either way. Because, as is always the case, the world she has created won't leave me alone. But before we go on, a word on the covers for this series. I love them. They are dark and still, frozen moments captured between shifters and their humans. And they seem to strike a particularly chilling note once you've read their stories.

Melanie Landon exists in survival mode. She just wants to get up, go to work, come home, check in with her sister Ann, and get through the day. And any day in which no one asks too many questions is a good one. Which is why she has a full-blown panic attack when she finds Brody Westerbrook on her doorstep full to bursting with questions. Formerly a local television reporter of some note, Brody recently quit his job to write a rather unusual book. And he's pretty sure Melanie can help him with the subject matter. You see, Brody wants to write a book on shapeshifters and he appears absolutely convinced Mel's sister Ann is one. Without thinking twice, Melanie does what she has done her entire life and shuts this persistent intruder out. Ever since she was ten years old and the adults in her life virtually checked out, she has known it was her job and her job alone to protect Ann. And up to this point, she's been successful. No one has been able to get behind that shield. But when Brody refuses to give up and Ann refuses to hide, Melanie's life takes on another level of complexity. Faced with the possible annihilation of the world as she knows it, she is torn between reaching out for the human contact she's always been deprived and clutching the one person she loves to her with every ounce of strength she has.

All of Shinn's worlds stick with me, but this one--this eerie version of our own--haunts me. This is not urban fantasy as you've come to expect it. It is not sassy. It is not swashbuckling. And it is not a non-stop, action-packed thrill ride. What it is, is quiet. Quiet and intelligent and disconcertingly real. So real that when it is grim, it is almost incapacitating in its grimness. So real that when the characters' emotions spill over, I feel precariously close to losing control of my own. In other words, Shinn's skill and subtlety do not make for what you might call comfortable reading here. Though they do wash over you with an almost surreal grace.


"Sit down, sit down," Ann says, still acting as hostess. "Brody, would you like some cookies? They're just store-bought, but they're pretty good."

"No, no dessert, thanks. Unless you have pie," Brody says, sinking to a seat. The rest of us arrange ourselves around the table though no one actually relaxes. I have the notion that William has gone into some kind of feral high alert, like a hare trying to oustmart a wolf. Brody, who is leaning casually against his chair back, is clearly still sorting through his memories, looking for a match. Ann is bouncing around like a child who's eaten too much candy, and I'm as tense as a violin string. If you ran a finger across my forearm, you'd wake a low G.

I appreciate that with these books Ms. Shinn chose to make her protagonists ordinary in every way but one: they are (in one way or another) intimately connected with someone who is a shapeshifter. And that small, unsettling detail reshapes the way they lead their lives in every particular. And yet, by virtue of the nature of the shapeshifters in their lives, these women spend unimaginable amounts of time alone. And my but how Shinn doesn't shy away from those interminable hours. Those days and weeks of loneliness, of wondering, of fear that are a direct result of this basic fact of their lives. There is nothing glossy about Melanie Landon or her monotonous life. Like Maria Devane before her, Melanie revolves around her shapeshifter. In this case, her much younger half sister. And like Maria, I really liked Melanie. More than that, I worried about her, about what would happen to her should she lose her purpose. I desperately wanted some small outside channel of happiness to find its way past her tall walls. Together, Brody and Ann (both as filled with humor and whimsy as Melanie is sober) make inroads in that direction. But for every step toward happiness, there is a separate but equal step toward loss. Sometimes the degree to which Melanie devoted herself to Ann felt unhealthy. Sometimes the stifling quality of her small world made me long for some sassy swashbuckling to bound in and save the day. But the thing is, that single minded devotion also felt natural. If I didn't necessarily feel as though it was how I would react, it certainly felt like a more-than-plausible reaction for Melanie. And if I step back and put myself in her shoes, in the suffocating situation in which she lives, I really don't know how differently I would operate. So while the books in this series are not easy ones to read (they are, in fact, exhausting at times), they are riveting and raw. And I find that sometimes it's good to read a book that doesn't conform to expectations, that discomfits even as it entertains. Don't you?

Reading Order
The Shape of Desire
Still Life with Shapeshifter

Linkage
The Bookpushers - "When I finished reading it after reaching for a few tissues all I could think is that Shinn has done it to me again."