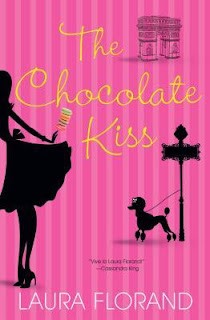 These darling covers continue to delight me. I am such a sucker for a good silhouette, and the multicolored macarons on this one really do lend it just the right whimsical air. I could hardly wait for my copy of The Chocolate Kiss to arrive once I'd finished The Chocolate Thief. It was just such a delightful surprise of a read, made that much sweeter by the knowledge that there were two more books in the series already out there just waiting for me. As feelings I get to experience in my life go, that is one of the ones I savor the most. This series does not follow the same characters, but branches out into side characters. We get glimpses of the previous ones, though, and of course the irresistible Paris setting remains. I had heard somewhat mixed opinions on this second volume. Some were not that enamored of the slight elements of magical realism, others found themselves absolutely charmed. I find when it comes to magical realism, readers really can go either way. For the most part, I tend to really enjoy it. As long as the author has an even, light hand and is careful to shore the fantastical elements up with a solid sense of place and realistic motivations and histories for her characters.

Magalie Chaudron has never belonged anywhere. Wrenched back and forth by her terminally transient parents, she grew up here and there, traveling back and forth from the lavender fields of Provence to the hills up upstate New York at the whim of a mother and father who both could not leave their homes and could not be long without the other. They prided themselves on their supremely adaptable, eminently self-reliant young daughter who could not only put up with the impermanence of their family but also brought joy to their lives. But when she came of age, Magalie took matters into her own hands. Moving to Paris, she made it through university and gratefully accepted the offer of her two maiden aunts to come and live above their salon de thé on the Île Saint-Louis in the middle of the Seine and work in their shop making her delicious chocolat chaud. And suddenly, in her little one-room apartment above La Maison des Sorcieres, Magalie finds home. And if she sends a few wishes for the people who drink her chocolate as she stirs and stirs the pot in her blue-tiled kitchen, well, who is she to say if they actually come true? And everything is stable. And there is no reason to believe she will be wrenched once more from this self-made home that fits her like a glove. Until Lyonnais arrives. Philippe Lyonnais, to be precise. With his world-famous pastries and his elegant shop, he invades her private island without a second thought for the struggling salon de thé down the street. Unwilling to give up her safety or her livelihood, Magalie confronts the lion in his own den, only to be rebuffed and brushed aside like the tiny speck of dust he clearly believes her to be. And so the battle begins.

Can I just start by saying I love how Philippe says Magalie's name? I don't usually "hear" the characters' voices when I'm reading a book. I may have some small sense of the tenor or cadence with which they speak, but that's generally as far as it goes. This book was different. Philippe was always saying her name. At just the right moments. And in just the right ways. And I could hear him. And I loved him for the way he named her and valued everything that fell under that name. In contrast, Magalie never calls him by name. Not out loud. Her inner thoughts are another thing, but her tightly controlled diction made his open admissions stand out. It was a small thing, perhaps. But it was quite simply a highlight of the book for me. And that is saying something, because I loved The Chocolate Kiss. I wasn't sure I would initially, but I came to care for Magalie and Philippe in a very measured, natural way as I got to know them. One of my favorite things about Laura Florand's male protagonists is the way they own their emotions. They are not ashamed of them and they are not interested in squelching them. They may have a myriad of doubts about the emotions and affections of the people around them. But they allow those people their qualms and hangups, even as they are not afraid to embrace their own. It's admirable characterization and I applaud it. Here, one of my very favorite scenes between our two leads:


" . . . if you send another spoiled blonde my way, I'm going to feed her something that makes her fall in love with you, and see how you like it."

Magalie's arrogant expression flickered. Abruptly she seemed to notice the winter-evening dimness of the apartment and crossed to turn on the light by her bed. Her heels sounded wrong on the apartment floor, too aggressive for this space. He wondered if she usually took them off by the door. Had his presence required her to keep on her armor?

"I don't feed them anything to make them  fall in love with you." She frowned deeply, seeming unsure where to put herself. Maybe usually she sat on the edge of her bed now, kicking off her shoes, curling up to examine her purchases . . . His blood surged long and slow and hot through his body at the image. "A poor, innocent princess? Why would I do something like that to her?"

"They don't look that innocent to me, but thank you for reminding me of moral considerations," he said politely. Really? She hadn't been sending those would-be seductresses his way? Something bitter was released in him, dissipating so fast, he had to struggle to keep his fighting form. "It's true, it would be quite reprehensible to make anyone fall in love with you."

Her eyes flashed. He almost laughed. This was fun. He felt aroused and infuriated and so alive, he held himself still only by his years of self-discipline. He knew how to pay precise, attentive care to the smallest of movements, how to wait as long as it took for something to be perfect.

She dropped her packages onto the bed, started to take off her jacket, and stopped herself. Oh, so she would usually shrug out of her jacket about now. And drop it carelessly across her bed or hang it up? No, hang it up. The room was so peacefully uncluttered. "If I wish anything on anyone, it's usually strength and courage and clear-seeing, which they never seem to have enough of. I have no idea why that would lead them to you." She looked as if she had bitten into something rotten in polite company and didn't know where to spit it out.

Strength and courage and clear-seeing. He felt himself draw a long, deep breath, like at the gym when he had just finished a punishing set of exercises well. Or at the Meilleur Ouvrier de France trials when the last, extravagant, impossible spin of sugar held. "Thank you," he said, "for the compliment." The extraordinary, beautiful compliment.

It was such a lovely moment, I'm honestly just as affected now, rereading it. It's hard to sum up the many reasons why I connect with these books, but I feel sure saying that in this case it was because I felt the arc of a relationship was so evenly and lovingly drawn. Because I liked them both so much. And because Magalie's journey particularly resonated. I grew up here and there, too. I know what it is like to not know how it is going to go each day in a new place. And I know how quickly the just-now familiar faces and spaces can be replaced with new ones, unfamiliar and uncertain in their newness. At the same time, folding is not an option. And as hard as she holds out, Magalie knows when something is important.


It was hard to trust in happiness, coming from another person, but . . . there was so much of it, around him.

There really was. I'm so glad I got to witness it.

Linkage
The Brazen Bookworm - "This is not a book to rush through but to linger over, preferably with a cup of hot chocolate."
Chachic's Book Nook - "These books focus on hot guys who make delectable desserts. What’s not to like?"
Dear Author - "This is one of the cleverest, most persuasive enemies-to-lovers stories I’ve read in a long time."
Fiction Vixen - " I enjoyed every page of this delightful novel."
Nooks & Crannies - "A romance that is as delightful as it is sinfully delicious."
Sara in Bookland - "the author's ability to describe Paris and the Île Saint-Louis and to transmit her love for these places was the best part of the book."
Smexy Books - "Adorable, charming, whimsical. These are the words that first came to mind when I finished this book."