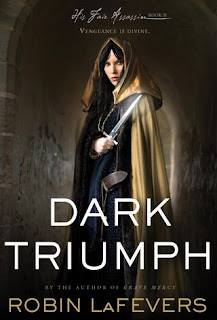 I fell hard and fast last year for Robin LaFevers' first novel in the His Fair Assassin trilogy. Historical fiction with a touch of fantasy to spice things up, this series reads like a breath of fresh air (to me) amid so many contemporaries and paranormals. Not that I don't love many of those. I absolutely do. But give me some top-notch court intrigue and I am one sated readergirl. I loved everything about Grave Mercy, and so it went without saying that Dark Triumph would occupy one of the top spots on my most anticipated reads of 2013 list. I will say that I worried just a bit about spending all of my time with Sybella. I loved her scenes in Grave Mercy, but I definitely resonated more with Ismae and her desperate mission. But I am always up for a sequel, and I had a number of questions about Sybella's past and future that I looked forward to having answered. I also held onto fond memories of Beast from the previous book. More of him was nothing but fine in my book.

Sybella has returned to the viper pit of her youth. Or rather, she has been returned to it on the orders of the Abbess of St. Mortain. Given strict instructions to ferret out the plans of the notorious d'Albret and forward them on to the Abbess and the duchess (presumably in that order), Sybella has donned her former persona within d'Albret's keep. Playing the bloodthirsty wanton woman has always come naturally to her, at least as far back as she can remember, and Sybella finds the second skin fits as uncomfortably well as it did before she escaped to the convent and found a cause worthy of her desire for vengeance. As loath as she is to return, Sybella holds fast to the promise the Abbess made, that it would be her hand and hers alone that would finally take d'Albret's life. That surety is what sees her through the interminable weeks and months at the mercy of a horror of a man who has betrayed his country and his people over and over again. What Sybella doesn't count on is another message from the Abbess with instructions to ascertain the status of one of the most well-known knights of the realm. The Beast of Waroch was believed to have fallen in battle holding off d'Albret's soldiers while his duchess rode to safety. But when Sybella reluctantly delves into the Beast's fate, she finds much more at stake within the bowels of the castle that has always haunted her.

Dark Triumph starts off with gusto! I was instantly caught up in the familiar trappings and machinations of the beleaguered court of Brittany. And I do mean instantly. I love that we jump right back into things without any summing up or recounting. It helped me feel an early attachment to and sympathy for Sybella by not reminding me how much I loved Ismae (and Duval). And so it was without a single hitch that I fell in love with this most burdened of young women. I felt like falling down on my knees myself and praying for vengeance to fall in her hand like a bright blade, allowing her to put her most vicious demons to rest. She deserved that much. Such strong storytelling on Ms. LaFevers' part, transferring readers' emotions and loyalties in this seamless way. As vile as it was, the time spent in d'Albret's clutches was expertly written. I crept around corners and into dark rooms with Sybella, heart in my throat for what she would find (or what would find her). When she does make the acquaintance of the man she is to save, the story takes a turn as they set out on a mad journey to warn the duchess of the villain's plans. And it is during this section that we are treated to the lovely unfolding of a most unlikely friendship. Thus, the heart of this very personal novel is revealed. One of my favorite scenes between Sybella and Beast:


We hit the road at a full gallop and cross it in a few swift strides. Beast reaches the cover of the trees first, then Yannic. Just as my horse leaves the road, a shout goes up from behind. We've been spotted.

"Faster!" I shout to the others, but the forest is a tangle of fallen limbs and gnarled roots, forcing us to slow down. Beast falls back to ride beside me. "Return to the road and keep riding. Yannic and I will lead them away."

"You're daft!" I shout, ducking a low-hanging branch. "I'll not leave a wounded man and a cripple to stand alone against so many."

"Now you're being daft. Did you see how many there were?"

"Twenty. Maybe more. Here!" We have reached a small clearing with a ring of tall, jagged ancient stones, some of them high and wide enough to hide us from sight. At least until we are ready to make our stand.

Beast's mouth is set in grim lines as he nods Yannic toward one of the stones. His jaw is clenched--at first I think he is in pain, and then I realize he is furious. "Go!" He puts the full force of command in his low, urgent voice. "I'll hold them off."

I look at him in disbelief. "Your fever has eaten your brain if you think I'll leave now."

He leans out of his saddle as if to grab me, then stops as his ribs bite him. "This is no fight."

"I know." I steer my horse toward one of the stones. The sword is not my favorite weapon, but its longer reach will be of greater value here. Once I take out a few with my throwing knives--

"No!" Beast makes a grab for my reins, but he misses and nearly falls off his horse. "I will not stand by and watch you struck down before me." His eyes burn--with anger, I think, until I see that he is also afraid. Afraid for me.

His concern inflames my own temper, for I do not deserve such consideration, and certainly not from him. I will not abandon Alyse's brother like I abandoned her. "And I will not stand idly by and watch you die a second time," I tell him.

Then d'Albret's men are hard upon us. Resigned, Beast draws the sword from his back with his right hand while his left closes around the handle of the ax. "I will not let them take you alive."

Of all the things he could have said, that is the one thing that comforts me the most. "Nor I you," I say around a strange lump that has formed in my throat.

Then he smiles his great big maniacal grin just as our pursuers burst out of the trees, their horses' hooves churning up the forest floor.

And so it goes between the two of them, neither willing to give up on the other and both hell-bent on achieving their goals. While quite different from the more refined dance that occurs between Ismae and Duval, it's a deliciously entertaining slice of swordplay. Rooted in mutual respect and a shared history of violence and sacrifice for their gods, this core of understanding and affection that grows between Death's handmaiden and the wildest of soldiers is quiet and strong and something to behold. As is everything about this most excellent of sequels.

Dark Triumph is out today.

Linkage
Candace's Book Blog - "I adored it!"
Good Books & Good Wine - "Dark Triumph is a worthy book two and I fell hard for Sybella."
Jen Robinson's Book Page - "Dark Triumph has it all."
A Life Bound by Books - " . . .  a beautifully written story rich with history, intrigue, sabotage and scandals that never stop."
Stacked - "It's just completely well-done, a worthy sequel."
The Starry-Eyed Revue - "If you loved Grave Mercy, I pretty much guarantee that you'll love Dark Triumph as much, if not more."
The YA Kitten - "LaFevers kicks it up a couple dozen notches and shows everyone how writing a sequel is done."