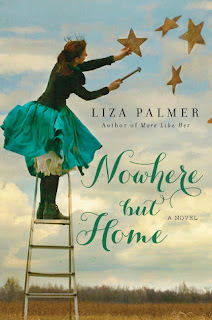 I have come to look forward to the latest Liza Palmer book with a vigorous sort of yearning. I discovered her through the hilarious and thoughtful Seeing Me Naked, and I did not look back. I've loved each of Palmer's previous four novels, but this one . . . I think this one is my favorite. It's certainly the one I had the most trouble letting go of, both when I had to stop reading to deal with some real life matter and when I finished the final satisfying page and realized it was over. And this time, as I was sitting there mourning the loss of the characters and my time with them, I started thinking about the adult contemporary authors writing today that I have these feelings for. I've read each book they've written. I've loved them all. And I am at the point where if they have a new book coming out, I buy it. End of story. And you know what? Liza Palmer and Sarah Addison Allen were the two names that stuck in my mind. For their charm, their depth, and their wonderful, wonderful consistency, I am a permanent fan. So there.

Her mother named her Queen Elizabeth Wake. And that first magnificent unkindness sort of exemplifies the whole ghastly course of Queenie's life to date. Always the outcast, along with her big sister Merry Carole, Queenie got the hell out of North Star, Texas just as soon as she possibly could. With a list of regrets a mile long, she struck out for something better. And since that fateful day, it's been a long string of cities and restaurants with no real place to call home. She inherited a knack for cooking from her dissolute mother, but she always winds up on the wrong end of a customer's fool request or a hotel manager's disfavor. After her last spectacular crash and burn, Queenie is forced to pack up her things and return to North Star. Merry Carole stayed and chose to raise her son alone, despite the town's vicious gossip. And though Queenie can't fault her for it, she's determined not to get sucked back in. She'll stay just long enough to find her feet again. And she'll do it as far under the radar as she possibly can. Of course, returning home means returning to every old scandal that town and its uber-traditional inhabitants never forgave her for. It also means running into Everett Coburn again. And that may be the one thing Queenie won't survive. That is until she is offered a job cooking last meals on death row at the local prison . . .

Good night nurse, I loved this book. And it started (as it often does with Palmer's novels) with the following epigraph from The Age of Innocence:


Each time you happen to me all over again.

Right there. Right there I knew this book was going to have its way with me. I was reminded of that line from  The Jane Austen Book Club where Prudie cries, "High school is never over." I knew it would be the same for Queenie. She's so strong-willed and weary that I immediately had her back. And I was enormously gratified to see that her sister Merry Carole (and her sweet nephew Cal) did, too. In fact, possibly the most luminous thing about Nowhere But Home is the exquisitely rendered relationship between these two sisters. Scarred by their growing up years or not, they are survivors in the most visceral sense of the word. I just loved them. And every small scene in which they spoke quietly in the kitchen or awkwardly pressed through their grief at a summer social was a work of art. By the time I was 50 pages in, I'd marked so many pages I was losing track. And then there's Everett. And the last meals. As if two adult sisters struggling to stay above their grief and years of bitterness wasn't enough. Palmer also serves up an old flame worth sighing over and the wide open wound that is working on death row. As for Everett, here's one of my favorite scenes in which he makes an appearance:


"Queenie, come on. He's ridiculous," Everett says, motioning out to where Hudson is standing with the other men.

"You like him and he's nice," Everett repeats, slamming his beer down a bit too hard on Reed's tiled counter.

"Yeah. I like him and he's nice. Is that so revolutionary?" I ask.

"Is his shirt tucked in or isn't it? Did he go to the bathroom and not quite tidy himself up after? I mean, I don't get what that look is about," Everett says, gesticulating wildly at Hudson and the offending plaid shirt.

"What's happening over there?" I ask.

"How was that nice lady your parents were setting you up with on Sunday? Talk about ridiculous," I say, walking past him and out toward the backyard. Everett reaches out and stops me. He leans down and speaks softly, intimately, into my ear.

"Go ahead and have your fun with Mr. I Like Him and He's Nice. I know how this ends and so does he." Everett's eyes are locked on mine. Green, brown, and yellow pinwheels intense and focused.

"So does he what?" Hudson asks, standing in the open French doors, partygoers hustling past him. Everett straightens and approaches Hudson. In that moment, I honestly don't know what Everett is going to do.

"Hudson Bishop," Hudson says, shaking his hand. Everett looms over Hudson, I'm sure reveling in the few inches of height he's got on him.

"I was just saying that I knew how this thing between you two ends," Everett says, his voice low and threatening. He folds his arms and juts his chin high. I'm speechless. I'm struck dumb.

"It seems the only thing between us two is you," Hudson says, walking over to where I am. He slides his arm around my waist and tilts his head just so.

Everett flicks his gaze from Hudson to me and turns and walks outside.

"He seems cool," Hudson says, walking into the kitchen and pulling a couple of beers from the cooler.

So, you see. Humor and tension. In equally tangible amounts. Which leads me to the last meals. Each chapter title was a meal. Sometimes it was what Queenie herself ate that day. And sometimes it was the last meal request from a prisoner about to die. At the beginning of those chapters, I had to take a deep breath before continuing on. Palmer handles the whole thing very well, and Queenie's evolving reactions to her job and its ramifications felt entirely organic to me, suffocating in their realness. Her time at the prison forces her to learn a whole new language for letting go. And, somehow, it all ties in to her unfinished issues with her mother, with Everett, and with every grudge she ever held. This book disrupted my focus in the best way. I simply had to curl up with it and accompany Queenie on her unenviable journey. As always with a Liza Palmer story, the painful and the beautiful walk hand in hand. Everything from the relationship between the sisters to the breathless love story to the mouth-watering food is carefully orchestrated and perfectly delivered. Nowhere But Home waltzed onto my Best of 2013 list before the dust had settled. Recommended for fans of Friday Night Lights, comfort food, and top-notch storytelling.

Linkage
Book Hooked Blog - "Highly recommend it."
Kritters Ramblings - "I fell in love with Queenie Wake and her quirky family."