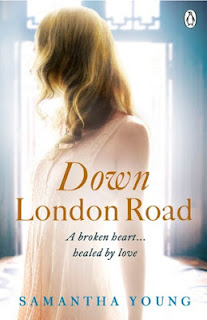 So I actually read Samantha Young's debut contemporary romance On Dublin Street quite awhile ago. And then I just never reviewed it. It may have simply gotten lost in the shuffle or I got distracted by some shiny object or what have you. The thing is, I enjoyed it fine. It lingered around the edges of my consciousness enough that I was looking forward to the sequel and immediately purchased a copy upon its release earlier this month. Down London Road takes place not long after the events of On Dublin Street and focuses on Joss' friend and co-worker Johanna. I wasn't sure what to expect going in, given that Johanna was not the most sympathetic of characters in the first book. But I'm coming to learn that those somewhat acerbic, occasionally deceptively simple side characters often come into their own with a vengeance when it's their turn in the spotlight. And I so love it when that happens. I was also awfully eager to return to the setting itself. I didn't get to spend as long as I'd have liked when I was in Edinburgh and I've longed to go back ever since. Happily, reading these books sent me straight back to wandering those same streets, ducking in and out of cafés, and generally soaking it all up.

Jo Walker has perfected the art of keeping all her balls in the air. From a young age, she's been the responsible one in her family (and I use the term "family" very loosely). Having bid good riddance to her deadbeat dad, Jo supports her alcoholic mum, her teenage brother Cole, and herself secretarying by day, bartending by night, and professionally girlfriending both day and night. Ever since the day she realized she could attract rich older men, she's taken that role seriously. And she's never been without a sugar daddy for long. The lives of three people depend upon it, in fact. And so while she never stays in a dead end relationship and she always chooses her partners with the utmost care, she's also never really been in love. Money always trumps emotions when it comes to keeping food on the table, taking care of Cole, and ensuring that the blackness that touched her own life growing up never stretches out to mar his. And she's learned to be all right with it. Really, she has. But when she attends an art exhibition on the arm of her current boyfriend Malcolm and makes the acquaintance of one Cameron MacCabe, the sparks (both good and bad) that fly threaten to throw off her delicate juggling act. And when she winds up helping Cam out by putting in a good word for him at the bar where she works, Jo unwittingly sets in motion a series of events sure to get in the way of the safe, structured course she has all mapped out.

I fell in love with Jo before I knew what had happened to me. Ms. Young proved to be exceedingly clever when it comes to her characterization of this steely young woman. Because I really did not care for her in the first book. But it turns out that I, like every other character present, was seeing her but not really seeing her. We all of us were only grasping the barest slice of what made up Johanna. Then all of a sudden, in this installment, I became privy to what was really going on behind the curtain. As Cameron later observes, this is one complex lady. And I loved her so very much. My heart broke over Jo (and Cole) over and over again as I watched them shoot for normal and miss by a mile. The demons in their past are dark and the ones in their present are little better. But, page after page, it was as though I could feel the strength in her spine, immutable and unwavering. I didn't wonder at Cameron falling in love with her. I only wondered that out of her long string of sophisticated, urbane boyfriends not one realized just exactly what he had. Though Jo does have self-preservation down pat, and that includes a rather alarmingly efficient smoothing away of anything that could be perceived as a flaw to potential providers. Which is why Cameron presents such a problem. Essentially the polar opposite of a potential provider, he is out of work and entirely unsophisticated and urbane. At least that's how he appears, with his laid back manner and his unusual tattoos. Yeah, I didn't wonder at Jo's feelings for Cam either. I just wondered if she would ever let loose her choke hold on security  long enough to figure out what they meant. The thing is--and this is important--I wouldn't have blamed her if she hadn't. That's how much I loved Jo. I wanted them to be together so badly, and yet I would have understood if she'd passed in favor of saving Cole (and herself) more pain and fear and want. And I just want to give Samantha Young all the rounds of applause for so brilliantly keeping the focus on her heroine. Everything else was secondary, beautiful--but secondary. A short, sweet favorite moment:


When you first tore me a new one, I wanted to know you. And when I got to know you, when I stood across a kitchen and you told me not to kill a spider because it didn't say much for us as a species if we killed something because we feared it, I knew.

I'm not saying who says it and I'm not saying who they say it to. All I am saying is--it's a good scene. This entire book is made up of good scenes, complex and nuanced characters, and one supremely encompassing romance. Down London Road is the kind of contemporary romance you can sink your teeth into. I had an alarmingly good time reading it, and I will unquestioningly be back for more.

Linkage
The Allure of Books - "I was beyond invested in this story."
Book Binge - "This book is as much Jo's personal journey as it is a romance."
The Bookpushers - "I really think Samantha Young hit the ball out of the park with Down London Road."
Dear Author - "This is not a heart and flowers, easy reading romance. The characters are tough to like at times, but their motivations always read purely to me."
Fiction Vixen - "One thing I’ve come to love about Samantha Young’s characters is that they always project an undaunted realism."
Smexy Books - "I absolutely positively adored Jo."