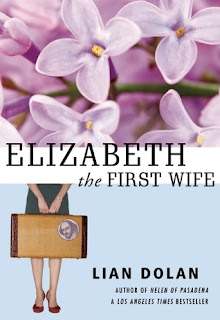 I fell in love with the title of Lian Dolan's sophomore novel the moment I read it in the email pitch. Then I read on to find out there was Shakespeare. It was a done deal at that point. Honestly, all you have to do is dangle a little Shakespeare in front of me and I am on board. This was my first encounter with Ms. Dolan's work. I had never heard of either of her novels before, and I have to say that ratcheted up my anticipation a bit. It's summer. And I am in the mood to be entertained. By all means, bring on the new-to-me contemporary fiction with a side of Shakespeare and a touch of romance on the side! As far as covers go, I really like these sort of retro chick lit covers both Elizabeth the First Wife and Helen of Pasadena have going on. The're attractive and light, perfect to slip in your bag and pull out as needed on a sunny summer afternoon.

Elizabeth Lancaster has made her peace with her past. What's done is done. She divorced her movie star husband when he cheated on her approximately two seconds in to their ill-fated marriage, and she is now (years down the road) happily installed teaching literature at Pasadena City College. So her ex-husband was her first, possibly final love. So her father is a Nobel Prize-winning scientist she hasn't really talked to in ages. So her mother is the most exhausting of perfectionists. So what? Life is simple. And uncomplicated. And . . . nice. But then her ex walks into her classroom, with that same charming smile and those same alluring shared memories, and tries to talk her into accompanying him to the Oregon Shakespeare Festival to spend her summer making sure he doesn't fall on his face doing live theater for the first time in a decade. And she's really not going to go. She isn't. But it would be live theater, A Midsummer Night's Dream no less. It would mean being a part of a serious production. Elizabeth's life has become just small enough that, in the end, she can't quite resist FX's offer. And so against the better judgement of pretty much every sane adult in her life, she heads off to Ashland and that adventure she's been looking for.

What a smart, thoroughly enjoyable read! In the same vein as Liza Palmer's Seeing Me Naked and Liane Moriarty's What Alice Forgot, Lian Dolan weaves together a lovely mosaic of a woman in need of inspiration and revival, of complex and family dynamics that reach into the daily moments of her life, of new possibilities and old mistakes. Elizabeth herself is extremely likable. The history and the current status of her relationship with FX are both presented in a way that reveals two very young, very human people who fell apart but who remain lodestones, of a sort, in each other's lives. I like that no one in the story is demonized, that Elizabeth is allowed to work out her feelings for her ex at the same time as she hesitantly embarks on a somewhat unexpected long-distance relationship with the man running her brother-in-law's political campaign. I enjoyed watching both arcs unfold simultaneously, the one bittersweet, the other exciting in its newness. Elizabeth's nighttime Skypes with the man squatting in her home for the length of the campaign were both humorous and charming. You can't help but root for them. Add to that Elizabeth's hilarious modernized Shakespearean dating advice, and you have the elements of a very good time indeed. Having attended regional Shakespeare festivals in the past, I thoroughly enjoyed Dolan's portrayal of Ashland and the antics of the colorful cast and crew of this racy adaptation of A Midsummer Night's Dream. Elizabeth's family, from her overbearing mother to her seemingly perfect and driven sisters, provided an excellent backdrop for her professional and personal quandaries. I finished Elizabeth the First Wife in two satisfying sessions and will be checking out Helen of Pasadena soon.