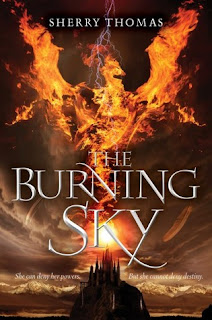 In a somewhat amusing turn of events, I actually picked up a copy of Sherry Thomas' debut young adult fantasy The Burning Sky because I read one of her adult historical romances several months back and really loved it. How's that for a commentary on the state of affairs in my neck of the woods these days? And while I really do love the cover after having read it (and for blessedly not featuring any actual human beings or, worse, a young boy reaching out to a young girl in space), I really don't know if I would have picked it up on its own. In my experience, when an author transitions from adult to YA, it is often (sadly) an absolute train wreck. As though the writing has been . . . sanitized or lobotomized . . . and all I want to do is wipe my mind clean of the lost chance. This is not always the case, of course, and there are instances of the exact opposite. And when that happens, everything is beautiful and nothing hurts. But. I do tend to hold my breath. Especially when it is a beloved author. But knowing how much I loved Ms. Thomas' writing before, I just had to see what she would do with a whole new world and a whole new readership at her disposal.

Iolanthe Seabourne has spent her life in relative isolation, living in quiet scholarship, moving from village to village with her increasingly unreliable guardian. And then one unsuspecting morning, as she is busy preparing for a local wedding, her life splinters into tiny, unrecognizable pieces. As an elemental mage, she is able to control three of the four elements, and her powers with fire (her best element) are often sought for weddings and other local celebrations. But when she succeeds in summoning an actual bolt of lightning, all manner of hell breaks loose and Iolanthe finds herself unceremoniously magicked away to a far corner of England where a strange young man insists she disguise herself as a boy. At Eton College, no less. Prince Titus of Elberon has been nothing more than a figurehead his entire life. With his country all but occupied by the fearful Empire of Atlantis, and the dreaded Inquisitor breathing down his neck day and night, Titus has retreated deeper and deeper within himself in an effort to keep the secrets he so carefully guards. And as long as Titus can remember, he's waited for his mother's prophecy to come to fruition. For the most powerful mage in the world to show himself and make it possible to join forces with the prince in his mission to save the world as they know it. When that most powerful mage turns out to be a 16-year-old girl, Titus is forced to regroup and convince her his cause really is worth risking her life as they train together to face the nightmare that is Atlantis.

The whole thing begins with the following irresistible opening lines:


Just before the start of Summer Half, in April 1883, a very minor event took place at Eton College, that venerable and illustrious English public school for boys. A sixteen-year-old pupil named Archer Fairfax returned from a three-month absence, caused by a fractured femur, to resume his education.

Almost every word in the preceding sentence is false. Archer Fairfax had not suffered a broken limb. He had never before set foot in Eton. His name was not Archer Fairfax. And he was not, in fact, even a he.

This is the story of a girl who fooled a thousand boys, a boy who fooled an entire country, a partnership that would change the fate of realms, and a power to challenge the greatest tyrant the world had ever known.

As you can tell, I really stood no chance at all. In fact, the almost immediate affection I felt for this book caught me unawares. The writing is there in all its subtle glory, which was the first relief. The worldbuilding is both cheeky and charming, which was the second. But the characters. How I love these characters. What impressed me the most was how Ms. Thomas was able to make me both hate and weep over Titus, this prince who has given everything, including his heart, to destroying the evil force that haunts his homeland. There is little but lies left to Titus when he first crosses Iolanthe's path, and none of them nice ones. Similarly, I devoted every reading moment to wishing Iolanthe would vault herself as far away as she possibly could from Titus and his impossible desires, while at the same time hoping somewhat feebly that she would see why he had molded himself into this callous instrument of vengeance and perhaps find a shred of something there worth saving. There is little but unexplored potential to Iolanthe when she first dons a boy's trappings and insinuates herself into life at Eton. But my, do they grow. And down such twisty paths, too. It was so much fun following these two along their dreadful road to confrontation. The stakes managed to be at once epic and intensely personal. And that is all I ever ask of a book. Well, that and a real villain. Interestingly, the villain in The Burning Sky is something of a double one. I feared the one I could see and the one I couldn't in equal measure. Of the Inquisitor, Titus makes the following chilling observation:


Gazing into her eyes was like looking at blood running down the street.

Talk about a Madame Defarge moment. That is exactly how I felt whenever she inhabited a room. Her malevolent emptiness made me want to turn tail and head for the hills, which means that I understood Titus' old terror as well as Iolanthe's fresh one. It was an altogether unsettling and addictive sensation. To say nothing of the Crucible, which was spectacular in every way and which I think I'll let you discover for yourselves. As you can tell, The Burning Sky comprehensively exceeded every one of my expectations. I closed it incredibly satisfied and perfectly delighted that there will be two more in this excellent new trilogy from such a talented writer.

The Burning Sky is due out September 17th.

Linkage
Dark Faerie Tales - "This is a must read for all fans of YA Fantasy."
Good Books & Good Wine - "Y’all, I made a great life choice as The Burning Sky is totally legit and such an April book, it’s not even funny."
My Friends are Fiction - "I adored her writing style, character interactions and world buiding."
The Page Turner - "The world building in The Burning Sky is phenomenal."
Realm of Fiction - "The Burning Sky is exactly the sort of book that effortlessly pushes the rest of the world to one side."