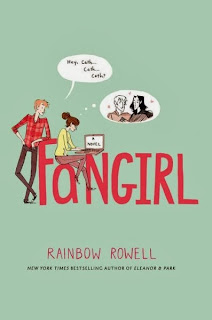 I feel like I've been waffling on whether or not to read this book for years now even though it's only been a few months. The thing is, I really enjoyed the first half of Rainbow Rowell's Attachments. I really, really did. And then I was summarily disappointed with the second half. I don't know if it was me or the fact that I read it immediately after giving birth and that just rarely ever works out for me or what. But the direct result was that I stayed away from Eleanor & Park, despite it's adorable cover and quirky premise. And I was apparently still shell-shocked enough that I was going to just go ahead and pass on Fangirl if it wasn't for Janice's enthusiastic review some weeks back. I thought I was just sort of waltzing around lacking the Rowell gene, when in fact I simply hadn't found my gateway book. So, Janice. Can I send you a book bouquet or a fruit basket or some such gift of gratitude? Because I'm kind of having a hard time imagining my reading year without this book. This hilarious, complicated book that induced all the feelings in the general vicinity of my heart.

Cath doesn't do social situations. Outside of her twin sister Wren and her dad, few people have been able to penetrate the force field of solitude with which she surrounds herself. Even her high school boyfriend Abel was really just a placeholder, a nice idea of a boyfriend. But there has always been Simon. And Baz. Ever since they were kids, Cath and Wren have teamed up to write Simon Snow fan fiction. And when the more vivacious Wren's social life took flight, Cath soldiered on alone. Dedicated to the fictional world of Simon Snow, her followers grew to number in the tens of thousands and sating their voracious appetites became a full-time job. Which is why college seems to be getting in the way so much. Having to make small talk with her roommate Reagan and Reagan's kinda sorta ex Levi sends Cath into paroxysms of exhaustion. Not to mention her demanding class schedule and not knowing where the cafeteria is and worrying about leaving her dad all alone at home to fend off loneliness. Cath is a basket case. Fortunately, her roommate can read the writing on the wall and stages an intervention. And thus begins Cath's tentative exploration of life off the page. But when Wren's life threatens to run off the rails and their long-estranged mother re-enters their lives, Cath's only refuge remains with Simon and his sometime nemesis, sometime partner Baz.

I fell on page one. It was laughable how fast I fell. And I'm not even a little bit hesitant to admit it, because I laughed and giggled and gasped my way through this absolutely delightful book. And not just your run-of-the-mill out loud laughing either, but the silent smiles that slowly grow until they take over your whole face and you have to stop and just let the moment happen and savor it before continuing on. Those moments occurred basically any time Cath was thinking, speaking, writing, or sitting in the same room with Levi. Honestly, the boy deserves a moment of silence all his own. I don't remember the last time I grew so fond of a nice guy so fast. In fact, here are a couple of my favorite Levi moments:


She didn't look over at Levi again until they were standing together in front of the elevator. (Condition: smiling, stable). When it opened, he put his hand on her back and she practically jumped in.

He grinned. "My plan is to do things that make you want to hang out with me again tomorrow. What's your plan?"

"I'm going to try not to make an ass of myself."

And now a somewhat spoilery exchange (because I literally cannot help myself with these two and trust me, there were way more spoilery bits I somehow managed to resist):


"I just want to know—are you rooting for me? Are you hoping I pull this off?"

Cath's eyes settled on his, tentatively, like they'd fly away if he moved.

She nodded her head.

The right side of his mouth pulled up.

"I'm rooting for you," she whispered. She wasn't even sure he could hear her from the bed.

I will never tire of Levi's smiles. But as smitten as I was, the focal center of the book remained Cath for me. And I'm so glad Ms. Rowell kept the whole thing so tightly focused on Cath's struggles, both with the world inside her head as well as with the world around her. Initially, I was wary of the actual Simon Snow excerpts (to say nothing of Cath's fan fiction sections). But Rowell surprised me with her deft interweaving of Cath's own life and the life she breathed into Simon and Baz and the whole Watford School gang. To be perfectly frank, she surprised (and wowed) me with the level of nuance on the grand scale. And before long, Cath's dorm room felt like home to me, felt disturbingly like my own dorm freshman year, papered with clippings and memorabilia declaring who I had been, threaded through with anxiety and hope for who I would become. I knew who Cath was. I could see her with perfect clarity. Last of all, one of the most visceral moments in the book, in which Cath confronts the woman who gave birth to her and abandoned her ten years later.


"You don't just leave somebody alone in a hospital," Cath said. It came out aflame.

"Wren's not alone," Laura said sternly. "She has you."

Cath jerked to her feet and swayed there. Not Wren, she thought. I didn't mean Wren.

"It's the right thing to do," Laura said, lowering her voice.

"In what alternate universe?" Cath felt the rage burst up her throat like a cork popping. "What sort of a mother leaves the hospital without seeing her kid? What sort of a mother leaves? Wren is unconscious—and if you think that has nothing to do with you, you are skimming the surface of reality—and I'm right here, and you haven't even seen me for ten years, and now you're leaving? Now?"

"Don't make this about me," Laura hissed. "You obviously don't want me here."

"Cather"—Laura's mouth and fists were tight—"I've reached out to you. I've tried."

"You're my mother," Cath said. Her fists were even tighter. "Try harder."

And that is how it's done. That is how you secure my everlasting loyalty for a character. She's so strong in that scene. Her fists are tighter. And I love her so much for saying what she needed to, for getting it out. I loved every word of Fangirl. As my friend Laura says, some books move in. I had a bed all made up for this one faster than Levi can crack a smile.

Linkage
Book Harbinger - "I found myself periodically detaching from the story."
Cuddlebuggery - "I want to grow old and die with it wrapped lovingly in my arms knowing that we’ve had a long and happy life together."
Dear Author - "I was rooting for all of them."
Ivy Book Bindings - "I found that Rowell tackled everything beautifully in this novel."
Prettybooks - "Fangirl is one of the most wonderful, accomplished, authentic YA contemporary novels I’ve come across. I think we needed it."
Specfic Romantic - " It actually seems to get better the more I reflect on it after finishing it."