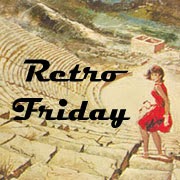 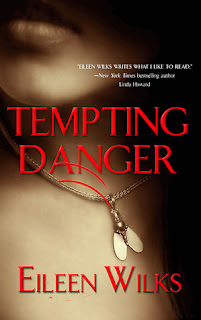 I remember first running across Eileen Wilks' name in the On the Prowl compilation I purchased solely because it contained Patricia Briggs' first Alpha & Omega novella (fabulous, by the way). I never really sat down and read the other novellas, though. Now I'm wishing I had so that I could have discovered Wilks' writing much sooner. Instead, it took my buddy in all things urban fantasy Chachic throwing herself headlong into a glom of Wilks' World of the Lupi series to convince me to give the it a shot. And what a time to come in to a new series. The World of the Lupi is currently 10 full books in and going strong! Plenty of adventure to keep me busy in between waiting for the next book in my other favorite series. I will say that this cover does little for me. After the fact, I like that it depicts an actual scene from the book. But even so, it leaves me feeling pretty meh. It does look as though partway into the series, the covers shift to somewhat more traditional UF covers, depicting Lily in action. And since I like Lily very much, this thing maketh me happy.

Lily Yu has worked her way up to Homicide and has every intention of proving she's earned her place there. Being a petite Chinese female cop has been no walk in the park. To say nothing of her less explicit ability as a sensitive. Able to sense magic through touch gives her a leg up on investigations, but would destroy her credibility as a detective were anyone but her captain to find out. And she needs every advantage she can get on her latest case. A man was murdered by what appears to be a lupus in wolf form. Lily is lead on the case, but things get thorny when the top suspect turns out to be the prince, heir, and general golden boy of the local lupi clan—Rule Turner. Famous for his charm and flexible morals, Rule has a less than stellar alibi and a whole lotta motive. Lily and Rule's first meeting is both illuminating and frustrating, as Lily comes to the realization that not only does she sense zero magic coming off of Rule (and she really should) but that she is inexorably drawn to him at the same time. For his part, Rule is determined to both clear his name and figure out why he can't get the irascible detective out of his mind. Together they set out to solve the murder and see if they can come to some sort of truce along the way.

There is just nothing not to like about this debut. It immediately put me in mind of the cancelled-too-early crime drama Life—a show I mourn to this day. This put us on excellent terms, as I love police procedurals, and a mash-up with urban fantasy pretty much steamrolled any defenses I might have erected. Lily is a sympathetic protagonist from the start. I love how hard she works every day. And I love Wilks' exploration of her strained relationships with family and colleagues as a result of her heritage, her abilities, and her aspirations. Rule is initially an unknown quantity, unknown enough that it set my nerves to jangling. However, he quickly works his way into not just Lily's inner circle, but the reader's as well. An early interaction that sold me on these two:


Her eyes flew to his. She saw flecks of gold in the dark irises, and the way his pupils had swollen. The pink triangles at the inner corners of his eyes. The dark, thick eyelashes. And the way his lids had pulled back in shock.

He dropped her hand. For a moment they stared at each other. Her heart pounded. His nostrils were flared, his breathing fast.

Dear God. What did she say? How did she put that moment away, unmake it?

He broke the silence. "I won't be behaving myself," he told her grimly. And turned and left.

What I love about Rule is how unexpectedly grim he is. I know, I know, but hear me out. The thing is he's this serious playboy with oodles of charm, and he could have come off utterly vapid, as nothing more than a warm, willing body. But Rule is much more than that. He's the heir to massive responsibility, his family dynamics are twisty and fraught, and when the connection with Lily is made manifest, it changes every detail of the life he leads. What can I say? The gravity with which he approached his new life impressed me. The bond is unwelcome to both parties. But Rule deals with it with more composure than Lily, if only because he knows what it is that's happening and she has no idea. It's his compassion that kills me. His compassion for Lily as the avalanche buries them both. And his fledgling affection and sense of wonder at the thought that it might change their lives in beautiful ways as well as terrible ones.


"Without Nokolai, the other clans are unlikely to support the bill."

"The clans don't have that much political clout."

"Mmm. Not all lupi are as open about their nature as I am."

Her eyebrows lifted. "Are you saying you've got people in high places? People with a furry secret?"

"The mystery bit is getting old," she observed. "So you think that taking out you and your father could affect the way things go in Washington?"

"The idea wasn't just to remove me, was it? They wanted me arrested, imprisoned. If the, ah, poster boy from lupi is proved to be a murderer, will the public support a bill making us full citizens?"

"Citizens kill each other all the time, unfortunately. But I get your meaning."

She fell silent then, which was just as well. He needed to give his driving most of his attention. But driving, even in this traffic, didn't require his entire mind.

Such a small thing, a name. But she'd never said his.

Yeah. Rule has layers. I was rooting for them both and I loved them, from their crackling tension on the page to the way their names sound one after the other. Their romance is key to the story, to be sure, but it never takes center stage and it is very much a work in progress. I look forward to watching them negotiate each other throughout each of the following books in the series. Wholeheartedly recommended for mystery lovers, crime lovers, urban fantasy lovers, romance lovers. You name it, Wilks has got it in her bag.