One & Only Blog Tour + Giveaway! 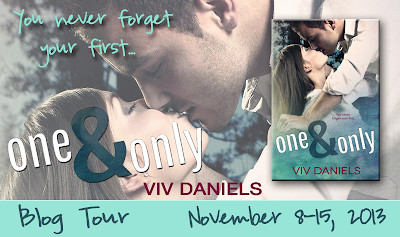 I'm delighted to be participating in the blog tour for One & Only by Viv Daniels (aka Diana Peterfreund). Today, Viv is here with a guest post on her favorite college class and we've got a fabulous giveaway prize pack for one lucky reader. Be sure to check out the tour wide giveaway that's running concurrently!

One night they can't forget...

Tess McMann lives her life according to the secrets she's sworn to keep: the father who won't acknowledge her, the sister who doesn't know she exists, and the mother who's content playing mistress to a prominent businessman. When she meets the distractingly cute Dylan Kingsley at a prestigious summer program and falls in love, Tess allows herself to imagine a life beyond these secrets. But when summer ends, so does their relationship -- Dylan heads off to Canton College while Tess enrolls at the state university.

One love they can't ignore...

Two years later, a scholarship brings Tess to Canton and back into Dylan's life. Their attraction is as strong as ever, but Dylan has a girlfriend…who also happens to be Tess's legitimate half-sister. Tess refuses to follow in her mother's footsteps, which leaves her only one choice: break the rules she’s always followed, or allow Dylan to slip away for a second time.

...And only one chance to get things right

In ONE & ONLY, Tess and Dylan are bioengineering majors. As juniors, they’ve fulfilled most of their distribution (general education) requirements, so you mostly see them in their classes for their major—working in their bioengineering labs or hanging out in the building. Their school, Canton, has a world-class bioengineering program despite being a relatively small liberal arts college (i.e., not a big Tech/STEM school) because of its proximity to Canton Chemical, a big pharmaceutical company in the town that not only hires Canton graduates, but donates a lot of money to the school.

Though I was a Geology Major in college, my favorite class in school was actually in the Lit department (I know… shocking for an author, right?) It was called “Women and the Rise of the Novel.”  There were three of us in the class, all women, all Jane Austen addicts. All got our minds blown when we read the course material, like The Princess of Cleves, Oroonoko, Millenium Hall (imagine the plot of an Austen novel but everything goes wrong), Clarissa… this stuff was subversive, y’all. It was all about how terrible it was to be a woman in a world where the rules were stacked against them.

At the end of the semester, as was done in my school, we filled out class evaluation forms. Out ratings were through the roof. Our professor called us in to talk about them. Three students didn’t make for a popular course, and in a departmental meeting our professor was asked by the head of the department where the disconnect was.

All three of us answered the same way: It was the title.

Sad to say, the word “women” in the title scared away male students. “Girl stuff?” Nope, not them. No matter how interesting and universal the subject matter of the class actually was, the word “woman” turned off both male and female students who thought it “beneath” them.

How awful is that?

Why is it that we dismiss and devalue things that belong or appeal to women? Why is “girly” bad? Having taken this class, having been steeped for months in the monstrous sexual politics and horrific prices paid by the female characters (and, to some extent, the female authors) for crimes committed against them… well, the three of us in the class now knew precisely what was going on there. That professor had taken three undergrad Austen fans and turned us into feminists. When the mere fact that the name of my favorite college class contained the word “women” kept the enrollment so low that it was in danger of being canceled? At my liberal, supposedly enlightened northeast college?

Something is very, very wrong with the world.

ONE & ONLY is a romance novel, a genre written primarily for women. (And often denigrated and dismissed for that same reason, as if finding love and trust and creating a family are not important in life!) If men read it and love it, I’m thrilled. (I know some of these men, btw, but they are my husband and my agent so far, so they may be a tad biased.) But love and connection is for all genders.

As for that class? The following year, it was back in the course catalog , with a revised name: Sex and the Rise of the Novel.

My professor was beating back applicants with a stick.