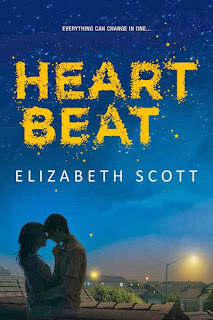 I've had an ongoing relationship with Elizabeth Scott's books for some time now. Ever since I picked up Bloom and settled in with a nerdy girl like me who played the clarinet. And then there was that one out of this world kiss in the kitchen . . . I'm sorry, where were we? Right. Since then, I've dipped in and out as Scott has continued to write. But it had been awhile since my last outing, and so when Heartbeat began showing up on the early radar, I felt like it was time. I didn't even really delve too much into what it was about before starting. And so I was, well, maybe a little ambushed by the guns this book was packing. Not that I wasn't expecting reality in all its graininess. But. Scott really steps up her emotional stranglehold with this latest contemporary. Let's just say a lot of time has passed since I finished it. It took me that long to decide what I wanted to say and figure out where my feelings were situated.

Emma remembers a time when things were normal. When she could breathe in and out and complain to her mom about the boy she thought she loved and the way her day went. When her stepfather Dan was a welcome, bright addition to their lives. She can remember it all so clearly, it's difficult to accept how vastly things have changed. How now if she wants to talk to her mom she has to go to the hospital room where she's being kept alive on life support while the baby inside her stomach grows to viability. How Dan has become the agent of her misery, as it was his idea to have a baby in the first place. His insistence that they keep her mom alive just long enough for the baby to be born. How if she wants to breathe in and out she has to lock her door and concentrate as hard as she can. Her best friend Olivia is an outlet of sorts, but the chasm between how things were and how they are presents itself on a daily basis. When Emma makes the acquaintance of renowned Bad News Caleb Harrison, no one is more surprised than she to find he's not precisely what everyone in town thinks he is. What's more, what he actually is might be someone who can understand her loss.


The thing about Mom dying is that the world didn't stop. It didn't even slow down. It's flowers and cards and everyone understands but no one does because Mom wasn't Mom to them.

I may have identified more than most with Emma's solitude by virtue of being an only child myself. The similarities may end there (thank heavens), but that passage? I am conversant with the somewhat shattering adult realization that when it comes to your parents, there's no one but you. Mom isn't Mom to anyone else. And so in times of joy and loss, you can look for someone to experience the same moment you are inhabiting, only to find yourself alone. The towering sweeps of emotion in Heartbeat kind of flattened me. I was forced to pause periodically and look up and remember it wasn't happening, to give my rage on Emma's behalf a period in which to cool. I could see Dan's perspective. I could. I just . . . it was never okay. Not for me. And, yes, I did find myself evaluating whether or not the whole agonizing setup and execution was proving too manipulative for this reader. It was a close call at second. But the development with Caleb spared the whole thing from imploding. It was honestly a palpable relief when he arrived on the scene. I appreciated that Caleb and Emma were equals. Neither one cornered the market on pain. It was pretty much sixes from beginning to end. But they discovered each other, slowly and with great reserve. And they held on. And because Emma (and by extension the reader) is able to look away from her own train wreck and see Caleb's version of it, because she's able to worry and care about him, it saves . . . everything. Processing his pain allows her to approach and deal with her own. And vice versa. There are parts of this book I don't ever want to read again. But there are parts I've reread numerous times since. So when you find yourself in need of a balanced and competent delivery of equal parts anger, sadness, and hope, this just might be the one to grab.

Heartbeat is due out today.

Linkage
Ashley Loves Books -"The only easy part for me was loving the characters and writing and this entire book."
Falling Into Books - "The emotion in this book is tangible."