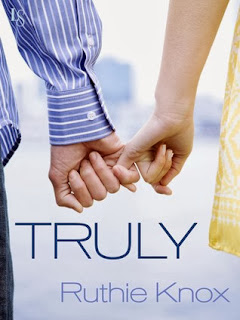 If you'd asked me last year if I was a fan of novel serializations, I would have issued a flat no. But then there was Truly. And it took me exactly no time at all to become a very big fan of this particular serial. It helped that I basically spent last year blowing through Ruthie Knox's backlist. Truly represented a somewhat different venture, as a handful of new chapters were posted each Monday morning over a period of several weeks. I began to look forward to Mondays (a first) with a kind of gleeful hunger. And those chapters just always came through the way I needed them to. And then I was able to hop on Twitter and gab about them with all the other poor saps following along. In other words, it was the height of fun. The first in Knox's New York series, Truly was available to read for free for a couple of months on Wattpad. It was then taken down in anticipation of the ebook release in August. This is the point at which I apologize for not getting a review up while it was still available. But I figure it's worth it anyway, because this book definitely deserves to be on your radar. The second novel in the series, Madly, is due out in ebook this October.

May Fredericks is having a bad day. A colossally bad one, as a matter of fact. The thing is, it was meant to be a good day. Her longtime boyfriend and star NFL quarterback proposed. Onstage. In front of a live fund-raising lunch audience. It should have been the happiest day of her life. But it wasn't. Not even remotely close. Thor (aka, the boyfriend) botches the proposal something fierce. And mild, good girl May snaps and stabs him in the hand with her shrimp fork. The day spirals downhill from there as she flees the scene of humiliation, is mugged in an alley, and washes up on a bar stool in Pulvermacher's—a Green Bay Packers haunt in the middle of the city that has always made her feel like an outsider. While there she makes the acquaintance of one Ben Hausman—the grouchiest ex-chef turned itinerant beekeeper you ever saw. Ben is recovering from a number of blows, including but not limited to an acrimonious divorce, the loss of his career as a chef, and a serious inability to throttle his anger. He is at full capacity and not at all interested in playing the white knight to a damsel in distress. And yet. Against his better judgement, Ben finds himself offering the down-on-her-luck girl from back home his help. And so begins a single day that stretches into two days, then three, and then more as Ben gives her a place to stay, a string of unforgettable meals, and maybe even a fresh view of this city he loves.


Ben took her to Park Slope to see about some bees.

Reader, I was instantly and irrevocably charmed. This was not my first time in the ring with Knox. I went in happily familiar with the easy way she has with her characters, as though they've been her friends lo these many years and don't even worry, they'll be yours, too, in a matter of minutes. It's my favorite thing about her books, as a matter of fact. That and the quick wit and seriously swoony romance. But Ben and May were something else again for me. It could have been the slow-building tension inherent in the weekly installments, but I'm inclined to believe it's to do with how well-matched they are, how real their issues are, and how naturally they come up against their own flaws and the flaws in each other, and work to deal with them and not take anyone else down in the process. As characters, they had integrity (which I admire) and a whole boatload of chemistry and charm (which I delight in). From watching Ben's scarred hands fix and serve up another mouth-watering plate for May to devour, to looking into the mirror with May on a shopping trip that changes the way she sees herself, I was at home within the pages of this book. And while I enjoyed the few chapters from May's sister Allie's point of view as she tries to monitor the progression of May's relationship with Ben from afar as well as prepare for the wedding she's no longer sure she wants, all I really wanted was to be with May and Ben. Walking the streets of New York and even driving the backwoods of Wisconsin as they traverse a number of states before they're able to settle on the nature of this thing between them. I loved every moment of them. Truly is easily my favorite of Knox's full-length novels. I can't wait to own my own copy.

And just in case I haven't managed to convince you yet, you can read the first couple of chapters here and see for yourself.

Linkage
GReads! - "For fans of contemporary, this is the best of the best."