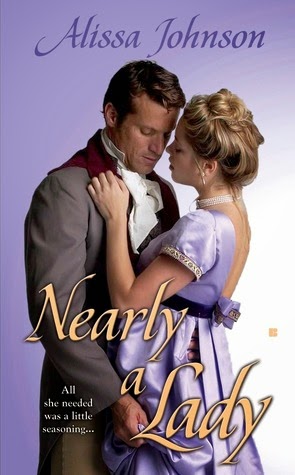 Nearly a Lady has been quietly languishing on my TBR pile for months now. I'm afraid that cover had something to do with it (she says sheepishly after making and breaking her 110th resolution not to judge a book by its . . . well). Uninspiring cover aside (but seriously, I just don't like the look of them and really that's far too much lavender for my taste and . . . well), it lingered in the back of my mind all this time for no discernible reason except that I read the ebook sample and liked that the heroine threatens to shoot the hero with her rifle in the opening lines. Sadly, the determinedly full price ebook combined with a lack of an available hard copy locally kept me from giving Alissa Johnson's writing a try. Until I needed something the other night, that is. And that girl with the rifle started calling my name. I am so very glad I listened, because this engaging historical is as lovely as they come.

Winnifred (Freddie) Blythe has not a single delusion of grandeur. She knows exactly who she is and where she belongs. And that is a girl no one has ever much wanted (with the exception of her longtime friend and governess Lilly) and on a forgotten farm in the backwoods of Scotland. And Freddie is happy with this life. Though they have next to nothing, she and Lily have learned to cope, even taking in mending jobs for the inmates at the local prison. Their calm, if somewhat desperate, lot is thrown into chaos when Lord Gideon Haverston arrives on their doorstep to right the wrongs his horrible stepmother did Freddie these past twelve years by cheating her out of the annuity his father promised her upon her father's death. One of the walking wounded, Gideon is a former Royal Navy ship captain home from the war and determined to hide the post traumatic stress he deals with on a daily basis. When Lilly insists Freddie be given a proper London season, Gideon feels honor-bound to make it happen. The more time he spends in Freddie's company, however, the more convinced he becomes he must get the women to London and get out immediately after. He can tell Freddie is developing a fondness for him, and the feeling is more than returned. But the nature of what happened on his ship, the Perseverance, make it imperative that Gideon never be responsible for anyone. Ever again.

You know how you go into some books knowing exactly what you're going to get and being perfectly okay with that? I thought I knew what I was getting with Nearly a Lady. I thought I would be getting a perfectly respectable amount of light Regency fluff, competently written and hopefully engaging enough to see me through to the end. And if we could avoid any over-the-top silliness or grand misunderstandings, so much the better. What I wound up getting was quite a bit more than those admittedly mundane expectations. Color me absolutely delighted and ordering my own paperback copy before I even neared the halfway mark. Throughout the book, both Freddie and Gideon resist being shoehorned into any of the usual genre tropes. She is wonderfully strong and uncouth, monumentally uninterested in a London season but willing to do that and more for the sake of her best friend. He is titled and genuinely charming, absolutely set on doing the right thing but suffering from no illusions that the hero role he finds himself playing is anything other than a role (and a very temporary one at that). Together they induce a surprisingly wide and strong range of feelings on the part of the reader. The loveliest of all the lovely things about Freddie is that she is ultimately unashamed of herself and she speaks her mind. She respects Gideon's privacy and sensibilities, but she draws the line at letting him get away with dissembling when it comes to the emotions he broadcasts and the ones he actually claims. And I just wanted to throw her a high five every single time. The loveliest thing among yes, a very many lovely things about Gideon is that he is honest with himself and he calls Freddie out as well (in his disarming, occasionally maddening Gideon way) when it comes to her flyaway temper and what exactly she sees in that mirror she is forced to hold up when faced with societal expectations. The bottom line is I never tired of them, I always respected them, and I swallowed tears more than once at the obstacles between them and happiness.

Here, a representative conversation between the two, in which their individual strengths, their humor, and the nature of their wonderful, burgeoning friendship is evident:


She considered him quietly. He hadn't shouted, or cursed, or even snapped at her. His voice had remained perfectly even. But the authority--in the tone, in the words--was all but palpable.

She took the seat across from him, suddenly fascinated. "I've been wondering how you managed to captain a ship for all those years. I was beginning to suspect you injured your leg during a bout of mutiny."

"Delighted to have satisfied your curiosity," he answered in the same unforgiving voice. "Your reasons, Winnefred. I'll have them now."

She sat up straighter in her chair. "I am not a sailor aboard your ship to be ordered about. And my reasons are none of your business."

"On the contrary, and to my considerable frustration at the moment, you, and everything you do, are my concern until I deliver you into the care of my aunt."

The mention of frustration at having to care for her until he could hand her over to someone else made her heart stutter and the edges of her vision turn red. It was an irrational and disproportionate reaction to an offhand comment, she knew, but she was helpless to stem the anger. She'd had her fill of being delivered from one person to the next as a child.

Her eyes narrowed to slits. "I have no interest in being anyone's burden, Gideon. And I will not be passed between members of the Haverston family like an inconvenient head cold."

She rose from her seat and turned to leave, but Gideon stood and caught her hand before she could escape.

"Sit down," he said softly.

She stopped pulling at his plea but didn't resume her seat.

Gideon gave her arm a gentle squeeze. "My frustration is with this particular conversation, not with you. I apologize for my poor choice of words."

"The conversation is with me."

"It is not our first disagreement." He gave her a disarming smile. "Can we not settle this one as we have others?"

Throughout this book, whenever things reached a point in a conversation where less nuanced, less dynamic characters would have fallen back on tiresome histrionics or predictable obtuseness, these two consistently remained both true to themselves and anxiously concerned for the other. They somehow managed to be sensible and fall wildly in love at the same time. It was a terribly satisfying experience accompanying them on their journey.

Lilly should be there. And Gideon. High-handed, muleheaded, wonderful Gideon. She'd never admitted it, not even to herself, but a part of her had expected him to come back to Murdoch House with her. Or perhaps it was more accurate to say that no part of her had been able to imagine going back without him.

Linkage
The Book Barbies - "The romance was so sweet, it nearly killed me."
Fiction Vixen - "I loved everything about it from the charming writing to the delightful characters."