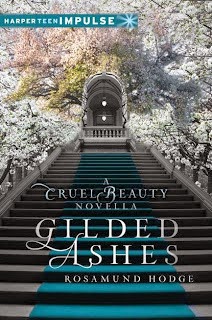 So we'll just agree to go into this review knowing that I really enjoyed Rosamund Hodge's debut novel Cruel Beauty, shall we? In general, fairy tale/Greek mythology mash-ups complete with lovely words are welcome in these parts. And so I confess I was excited but just a little bit sad when I found out the next entry in the world would be a novella. Give me all the pages, please. But. It was to be a Cinderella retelling set in the same world and, as that was clearly awesome, I resolved to take what I could get and be grateful for it. I like this cover, although it's a bit bland for my taste and doesn't inspire quite the same swirling dread as the cover of Cruel Beauty. I do like what they're doing with the stairs. I think I might have liked a hint of Maia somewhere in there to humanize things. And, as it happens, there is a whole heaping helping of dread in this little book, so something more sinister would have worked splendidly. But, as I said, take what I can get, etc. etc.

Maia lies all the day long. From the moment she gets up at the crack of dawn to prepare the morning meal for her stepmother and stepsisters to the moment she curls up at night and gives in to oblivion. She lies and lies and lies some more just to be on the safe side. Because if she doesn't, if she lets on for one moment how impossibly dreadful every moment of every day is, her mother will exact revenge on the people around her. And no matter what they've done or what they call her, they don't deserve that. Maia's mother passed away when she was a little girl. But on her deathbed she made a bargain with the Gentle Lord that she be able to watch over her only daughter from the other side of the grave and that any who hurt her would be cursed. And so Maia is never truly alone. She must marshal every thought, every wayward impulse, so that the only quasi-family members she has left are not torn asunder. And it is a grief-filled existence to be sure. Her stepmother went mad upon her father's death. Her stepsisters expend all their energy scrabbling for their mad mother's approval. And it is Maia barely holding the whole decrepit thing together. Until one day her beautiful and desperate stepsister Koré sends her with a letter for the prince. A letter she is certain will spark his interest and potentially lead to a union between them. Against her will, Maia makes her way to the palace to deliver the missive. And it is there she meets Anax—a man she can talk to, who could all too easily become another person she must protect from her mother's dark curse.


My mother loved me more than life itself. That's how everything went wrong.

The brilliant twist on the fairy godmother absolutely made this book for me. That it is her own mother who unwittingly made Maia's life a living hell. That Maia is simultaneously forced to serve and trying to save the people who despise her. That everyone seemingly had such good intentions and that those intentions are now literally tearing their loved ones apart from the inside. Well. It's a feast for the imagination. And it is just such a wicked fun Cinderella retelling. What this tale needed was a little more in the way of savage, black-hearted deceit and Rosamund Hodge brings it. I loved Maia immediately. It was suffocating, her life—her exhausted, interminable insistence that she was happy, that everything was okay. I loved Anax, too. He's so far from the sort of blank and charming male that often fills the prince role in this story. He, too, has an impossibly painful past and looks to his future with little to no joy. Each time Maia is sent to deliver a letter, they talk. They just . . . talk. And it's a moment to breathe for each of them. Of course it grows to mean more to both of them, despite the sizable gap in their understanding of what the other's life is like. It is as though each character in this rich novella is operating under the thinnest veneer of sanity. The deeper in the reader goes, the more apparent this tenuous hold on reality becomes. But those scenes in Anax's study. Their lovely conversations. They provide such a quietly affecting and sweet counterpoint to Maia's internal chaos.


When the footman eases the door open, Lord Anax is sitting at the piano with his back to us, pounding out a rollicking dance tune as if his life depends on it. The footman opens his mouth to announce me, but I shake my head and slip inside silently.

The sofa is soft as newly risen bread dough. I sink into it. Lord Anax is slamming out the notes of the song as loud and as fast as he can, but I'm asleep in moments.

When I wake up, he's playing a different song—slower, more intricate, with a multitude of trills. He stumbles over every one, and though he manages to keep his playing gentle enough to suit the piece, the whole thing feels shapeless.

He hits the final chord a little too fast and loud. Then he looks over his shoulder at me. "Should I be flattered or insulted that I sent you straight into the arms of Morpheus?"

I stand and walk to his side, digging into my pocket. "I have a letter for you."

"Of course. Did you think it was any good?"

"My playing." He's staring at the piano keys, and his voice is light, but I can hear the tension underneath. "Did you think it was any good?"

I consider the question. He's never punished me for telling the truth yet.

"Don't be tactful now. You were thinking something."

"I was thinking," I say, "what does it matter if I liked it or not? You won't stop or start playing for love of me. You don't care what I think, and I don't care what you play."

"I would have been a piano player," he says abruptly. "If I weren't the duke's son. I know it's not genteel, but if I weren't my father's son, I wouldn't be a gentleman."

"No." He stares at the keys. "I'd never get tired of music. But I'd never be much good at it either." Gently, as if he's closing the doors of a shrine, he lowers the lid back over the keys. "Just as well I'm the duke's son and everyone has to flatter me."

I remember this morning, how I yawned and immediately whispered, I'm so happy to be awake, Mother, as I stirred the porridge. I remember Koré looking at the dress I sewed for Thea and saying, I'm glad you've found something that stupid girl is good for, Mother.

"You're not alone," I say. "Everyone has to flatter somebody to survive. Besides, I didn't mean you'd get tired of music. Being a commoner isn't easy, you know. You'd get tired of the work."

"Every day. But unlike you, I don't have a choice. Here's your letter. I suppose I'll see you tomorrow."

He catches my wrist. "Maia," he says, "thank you. Thank you for telling me the truth about my music."

"You're the first one, can you believe it?"

I feel the opulent room weighing down on me, as heavy as the smiles I craft for Mother.

His music really is terrible.

But it echoes in my head, all the rest of the day.

I read it in one sitting (not a difficult feat as it clocks in at a scant 111 pages) and my only complaint was the eternal one when it comes to novellas—I wish it were longer. It didn't need to be. But my greedy heart will always ask for more.