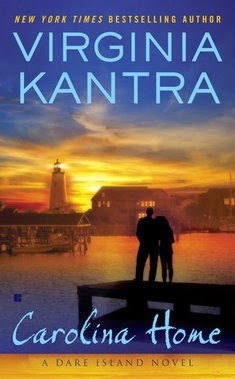 Glowing recommendations from my trusty Chachic and the lovely Laura Florand put this book (and series) on my radar awhile back and I proceeded to add it to my ever-growing TBR. And then I just sort of continued to put it off since a copy wasn't readily available at any of the usual sources and the ebook was (and is) a whopping $7.99. Then I hit a sick weekend and nothing, but nothing was hitting the spot. So I bit the bullet and dove in. It's worth pointing out that I'm not a huge connoisseur of small town contemporaries, and I was not a little concerned that it would prove to be (as has happened a number of times in the past) a little too cozy for my taste. But of course the range within that subgenre is as wide as it is with any other, and I think I just hadn't come across the right recipe. Happily, Virginia Kantra's Dare Island series hit just the right spot for this quasi-cozy-phobic reader.

Allison Carter came to Dare Island in the hopes of shedding the scales of her parents' expectations and finding fulfillment teaching high school English in the somewhat isolated fishing village. Matt Fletcher spent his early life at the whim of his father's career in the Marines, but has called the island his home long enough now for it to mean something. As a single father who captains a charter fishing boat for a living and lives with and helps support his aging parents at their inn, he is not in any way looking for a long-term relationship. Longing for just the sort of permanence Matt is working hard to avoid, Allison is nevertheless reluctant to get into any sort of relationship with him, especially given the fact that his son Josh is one of her students. But the two somewhat isolated individuals continue to be thrown together by circumstance (and Josh's performance, or lack thereof, at school) and soon it becomes a not inconsiderable struggle to find reasons give at least some semblance of togetherness a try.

Growing up, I spent many summers at my aunt and uncle's house in North Carolina. I have countless fond memories of sweltering summer days, chasing fireflies at night, and trips to the coast full of hours of splashing in the turf and falling asleep tangled in a bed of cousins listening to the crash of the waves. All of this to say that it took Dare Island and I no time at all to appreciate each other's charms. The setting is such a strength in this novel, and that is saying something, because it is a novel full to the brim of swoony romance and heady glances, weighty family drama and genuine humor. Given how many elements Kantra was balancing, I kept expecting at least one to veer into the cheesy, the melodramatic, or the overwrought. And yet not one did. Somehow she made me care for not only Allison and Matt, but every single one of Matt's family members, from his sweetheart parents and his scalawag son, to his somewhat heedless younger brother and his unexpected niece. This attentive character development made it a pleasure to follow whomever the narrative revolved to with each chapter. The focus definitely hinges on Allison and Matt's relationship, but so much of what goes down plays against the very important background of the Fletcher family and the charming inn they all inhabit. I loved how good Allison is with children, from the teenage students in her classes to Matt's troubled niece Taylor who gets dumped in their laps after her mother's sudden death.

The Fletchers themselves are a very loving family, but they need Allison, no matter how much Matt might like to think he's a lone reed. And Allison herself is so careful and conscientious when it comes to carrying on a relationship with a single father and being there to help as much as she can without stepping on any toes. I always loved Allison. It's no small challenge she and Matt face in daring to test the waters of their attraction. But what was between them fit itself unobtrusively into the spaces inside them that were empty. It felt real and sweet, and it so clearly made their hours and days better. I love it when a romance manages to demonstrate that. And while there were a couple of expected misunderstandings here and there, I appreciated how they were handled and how my emotions never felt toyed with or forcibly disengaged by unnecessary drama or inconsistencies. The whole thing builds to a particularly lovely resolution scene in the inn and I put Carolina Home down completely satisfied. Of course, I immediately binged on the rest of the series. And a good time was had by all.

Linkage
Chachic's Book Nook (series review) - "Virginia Kantra’s Dare Island series was one of my favorite discoveries last year."
Dear Author - "There’s enough conflict going on for this book to feel meaty yet still finished."
Fiction Vixen - "At first it seems like it will be a lighthearted contemporary romance but as the story goes on so many emotional elements come into play."
Romance Around the Corner - "It has that community feel to it, but it’s not a light read, and the focus isn’t just the romance but the overall storyline that comes from the family conflict at the core of the series."