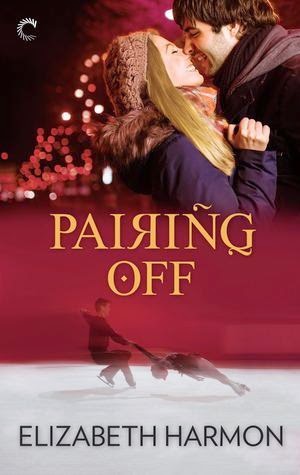 I have my pal Li to thank for steering me in the direction of Elizabeth Harmon's debut novel Pairing Off. She clued me in to its existence, pointed out that it featured Olympic figure skaters, and well . . . that was all she wrote, folks. I am a huge figure skating fan. And while I actually haven't read many books that focus on the sport, there was simply no way I was going to not read a book billed as "The Cutting Edge with a Russian twist." I adored that movie as a kid. As you can probably tell, I haven't been so much with the review writing of late. Happily, that is in no way an indication of how my reading has fared, because I have been reading up a storm. But lately I never seem to get around to sitting down and hashing it out. But with the figure skating World Championships coming up in a couple of weeks, I thought it was the perfect time to highlight this little gem.

Carrie Parker is fairly certain life as she knew it is over when her career as a pairs figure skater comes to a grinding and spectacular halt courtesy of a scandal involving her partner and a judge. Which is why she literally jumps at an unexpected and unusual invitation to travel to Russia and audition for a suddenly open position. What she does not expect is that the male partner will turn out to be a familiar (and wholly unwelcome) face. Anton Belikov is in need of a partner STAT. His longtime skating partner (and girlfriend) Olga has up and left him for greener pastures and a partner more likely to see her to the gold medal podium at the Olympics. Determined to achieve his dream and make a go of it without her, Anton warily follows his coach's advice and auditions the disgraced but unquestionably talented American. However, with the barriers of language, culture, politics (and a distant night only Carrie remembers) looming between them, success on or off the ice is no guarantee for this unlikely team.

I was just so taken with Pairing Off, you guys. From the very start, I could tell the story was going to wrap itself around me. Carrie is immediately sympathetic, and though the narrative touches ever so briefly on the long ago night she and Anton met, it is nonetheless clear to the reader how it affected both of them and how it will play an uneven but key role in their development as an actual pair. What I was not expecting was how deeply I would fall in love with Moscow and Carrie's experiences there. Harmon writes with great affection and joie de vivre when it comes to the streets and alleys, gardens and soaring architecture of the Russian capital. It is nothing short of a delight accompanying Carrie on her explorations, and I was so pleased that aspect of her new life was allocated adequate page time. Carrie's willingness to fight her attendant isolation and uncertainty in a foreign clime with an open and inquisitive mind and with consistent forays out into her new home endeared her to me even as it filled me with wanderlust. And as she learns the ropes of her adopted country, so does she learn the ways of her adopted partner. A favorite passage in which Carrie gets into a spot of trouble and calls Anton to help her out:


"I've never been happier to see someone in my life."

"What the hell were you doing?" he shouted. "Trying to get killed? I told you to stay near city center!"

She stared, looking for Anton, not this furious, wild-eyed stranger. "And you also told me about the park where I could go hiking! Look, I'm not your employee and I'll go where I please. I got a little lost. It could happen to anyone."

"But it didn't happen to anyone. It happened to you!"

Carrie felt her eyes grow wide. Was he suggesting she wasn't expendable? Or was his real concern the hassle of finding another Olga replacement? Much more likely. Her chest tightened and it was hard to breathe. "Yeah, well I'm sorry to be an inconvenience. If I'd known you were going to yell at me, I never would have called." She fumbled for her map and shook it open. "The subway's two blocks that way. Drop me off. I'll get home just fine."

"Don't be ridiculous. I'm not dropping you at subway," he muttered. "I was close by anyway. It's good you called."

He jerked his head around, and shot an angry look across the car. "Is that what you think I care about?"

The tense silence was filled by the muffled sounds of traffic outside. Jaw tight, Anton turned his gaze back to the road. "You and I are in this together. Partners, like I said before." His voice softened. "Not just two skaters making tricks."

There is very little not to love about Anton. Yet I appreciated how slowly their relationship developed. He was still handling a long distance relationship with a girlfriend who abandoned him professionally. She was struggling to reconcile the man she sees before her with the one she spent only a handful of hours with years ago and who does not seem to remember her at all. Their respective families are complicated and play strong roles in shaping the way they see the world and the fears and hopes they harbor for their futures. There are layers upon layers between these two, and I relished the gradual dismantling and rebuilding they had to go through on their way to forming a firm and equal partnership. This quiet, romantic book is such a lovely read and one of my favorites of the year thus far.

Linkage
Bookaholics Not-So-Anonymous - "I loved the differences in cultures and how Anton and Carrie worked on their partnership, then their friendship, and then much later on, their relationship."
The Bookpushers - "I absolutely love when a book really incorporates it’s location into a book so deeply."