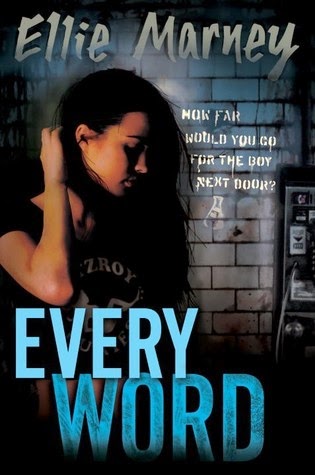 One of the most pleasurable reviews I've written this year was the one I wrote in January for Every Breath—the first book in Ellie Marney's spectacularly good teen Sherlock Holmes series. I enjoyed the book so much and was so blasted eager to spread the word. Now I'm even more over the moon to tell you I've read Every Word, and it is every bit as good as the first. In fact, it's better. Everything that was good in Every Breath is essentially ratcheted up in this sophomore entry, and there isn't one misstep along the way. I was on the edge of my seat for every page. I was that worried about my beloved Watts and Mycroft. And with excellent reason. Ms. Marney spends zero time beating about the bush and jumps right into pulse-pounding action and gut-wrenching emotion. Which, as you know, basically means I was in heaven from start to finish.

It's not that Rachel Watts would have preferred to have been able to say goodbye to her sometime partner/accomplice James Mycroft before he left for parts unknown. It's that she absolutely cannot believe he left without her, let alone without telling her. Knowing he's still on the trail of unraveling his parents' tragic deaths, she doesn't trust him at all on his own in London investigating an eerily similar car crash to the one that orphaned him. And so it's not a question of if, but when she will hare off after him. She's prepared for the supreme lack of welcome she'll receive when he finds out she's followed him. But she can't let him face that many demons alone and is determined to back him up in whatever capacity he needs. What she doesn't expect is how thorny a "simple" forensics investigation becomes once it expands to  include additional murders and the disappearance of a copy of Shakespeare's First Folio. Together, the two dogged investigators must navigate the increasingly treacherous waters of a multifaceted mystery as well as their own knotty relationship.


But in that second, in his face, I see the whole world. I finally understand something crucial.

James Mycroft did die in that car crash seven years ago. Seeing what he saw, experiencing all that pain, that ten-year-old boy passed away. The person who returned was not the same. He was changed so completely, so physically and mentally transformed, it was as though a whole different individual was born. A different boy, living in a different place, with a guardian and no parents, a boy with no past and only one name . . .

All the blood rushes out of my cheeks as that name falls off my lips. "Mycroft . . . "

I'm such a worrier. I always worry when I know an installment in a series is going to switch up locations on me, even when that means spending the majority of the story in London. I should learn to just roll with the punches, but I never seem to. So I was apprehensive that Watts-and-Mycroft might not translate as well in a new locale, and I was even more concerned about the obstacles they would encounter and how Mycroft would handle Watts flagrantly disobeying his wishes and inserting herself (even farther) into his most private pain. Of course, none of it turned out to be a problem whatsoever. I mean, it's far from smooth sailing. There's pain and anger galore, and everyone gets hurts and alternately holds it in and has it out with the objects of their pain and anger. But it's all so gloriously done that it only endeared these characters and their story to me further. Watts is so spectacularly direct when it comes to Mycroft and his massive issues. When he throws out another wild pitch, she doesn't even flinch but watches it sail by and then raises a metaphorical eyebrow at his display. It was hugely gratifying, watching them negotiate one another, to say nothing of the brilliance that is their combined deductive exploits. Truly, together they are a force to be reckoned with.

Which is not to say that they don't struggle mightily (and on every front) in this book. Because if ever a book was fraught, it's this one. I was prepared for a lot of things, but I wasn't prepared for how dire it got in the end, for just how far through the fire Marney was going to drag her two protagonists. It was incredibly effective in ensuring that I was with them. The peril felt almost unbearably real. But the wonderful bit is that through all the anxiety and grim darkness are woven the most beautiful threads of love and hope. Along with a downright explosive amount of chemistry. These two, you guys. Seriously. I want to quote each of my favorite exchanges here, but they are all far too spoilery. So I will content myself with assuring you of the excellence of the storytelling and imploring you to read it, too, so that Watts and Mycroft will have more of us on their side when they confront the fallout of what they've done in the next volume. I, for one, am terrified. Deliciously so.

Linkage
The Book Wars - "Every Word most definitely will remind you that “edge of your seat” is a phrase for a reason– I literally was on the edge of mine. Recommended!"
Forever Young Adult - "Instead of creating a story that simply takes the reader along for the ride, Marney has created one that makes you want to be a part of the ride, for better or worse."
My Friends are Fiction - "These books are addicting and this sequel was even better than the first."