A Decade of Angieville 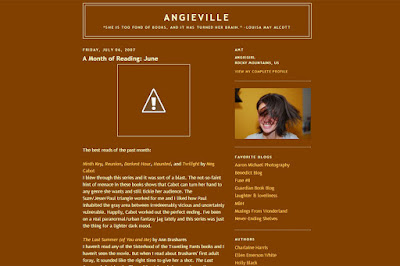 I woke up this morning a bit flummoxed to realize that today marks my blog's ten year anniversary. How . . . how did that happen? The lovely thing is that the bemusement was almost immediately followed by a palpable thrill of wonder at the fact that I've been doing this thing—this thing that I have come to love, that has become an integral, limb-like part of me—for a decade. There are only a few other things I've been doing that long. I've been married to my husband for just a few years longer than that. I've been a mother for almost exactly two years more. In fact, ten years ago on this night I put my little boy (only had one then) down to bed after a satisfactory night of trick-or-treating, climbed into bed with my notebook, and Aaron sat down and started telling me about how he thought I should start a blog, how it would be a good place to . . . oh, you guys. Talking about this brings the emotions precariously close to the surface.


He told me he thought it would be a good place to talk about books.

Is it odd that I'm crying as I'm typing this right now? It doesn't feel odd. It feels like these tears are because it turned out to be exactly that. And more. That what started out as simply listing the books I'd read and reread that month became an extension of home, when I needed that so much as I was adapting to being a mother and trying to balance so many new and old aspects of my life. It became a forum and an outlet and a marvelous stepping off point into the virtual world of . . . you. All of you. You magnificent community of people who are so varied and so colorful and so vital to me now. You read and you write and you think so much, and you laugh and cry and rage about what you read and write and think about. And you share it with me. And you tell me what books you couldn't imagine living without, and I read them and they become mine, too.

It was a revelation when it all began, and it continues to be one of the brightest elements of my life. To know that when I, as Yeats wrote, "bring you with reverent hands the books of my numberless dreams," that they will be safe. With you.