“The Rogue Not Taken by Sarah MacLean is my favorite book of hers to date. If you’ve read her, or know me, then you know that I just said a thing.” —Smart Bitches, Trashy Books


Lady Sophie’s Society Splash
When Sophie, the least interesting of the Talbot sisters, lands her philandering brother-in-law backside-first in a goldfish pond in front of all society, she becomes the target of very public aristocratic scorn. Her only choice is to flee London, vowing to start a new life far from the aristocracy. Unfortunately, the carriage in which she stows away isn’t saving her from ruin . . . it’s filled with it.

Rogue’s Reign of Ravishment!
Kingscote, “King,” the Marquess of Eversley, has never met a woman he couldn’t charm, resulting in a reputation far worse than the truth, a general sense that he’s more pretty face than proper gentleman, and an irate summons home to the Scottish border. When King discovers stowaway Sophie, however, the journey becomes anything but boring.

War? Or More?
He thinks she’s trying to trick him into marriage. She wouldn’t have him if he were the last man on earth. But carriages bring close quarters, dark secrets, and unbearable temptation, making opposites altogether too attractive . . .

PRE-ORDER
Anyone who orders a signed, print copy of the book from WORD Bookstores will get a gorgeous printed copy of this map designed by Amy Solomon! 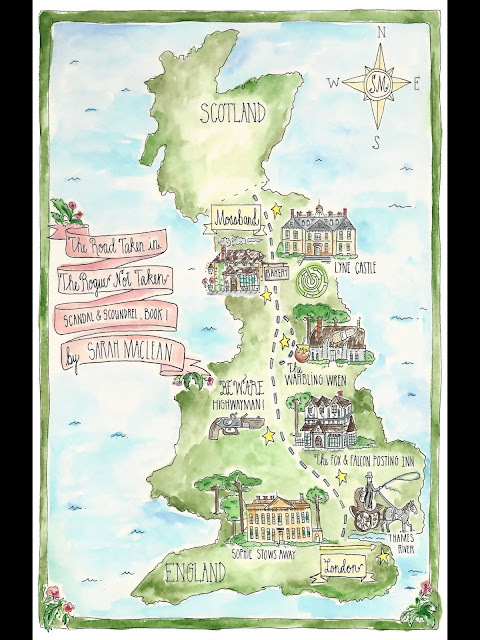 The Country seat of the Dukes of Lyne, Lyne Castle is the childhood home of Kingscote, Marquess of Eversley, who left home at eighteen after a terrible tragedy and never returned. Summoned home by his ailing father, King finally returns--with the unexpected addition of Lady Sophie Talbot, irritating and somehow irresistible. The estate boasts one of the most complicated labyrinths in Britain...where King and Sophie find solace, and heartbreak, and each other.
Excerpt:

Sophie would want love. She’d want it pure and unfettered, given freely, along with all its trappings. She’d want the marriage and children and happiness and promise that came with it.

King could see it, the life she wanted. The line of little girls, blue-eyed and brown-haired, in love with books and strawberry tarts. For a moment, he imagined them smiling at him the way their mother did, filled with happiness and hope.

For a moment, he let himself believe he might be able to give it to her.

But she would want love, and he would never be able to give it.

He didn’t have it to give anymore. And those children, they would never be his.

“Tell me about last night,” he said softly, looking up at her, his hands at the hem of her skirts.

Giveaway!
To celebrate the upcoming release of Sarah MacLean's The Rogue Not Taken, one winner will receive a very exclusive early bound manuscript of the book plus a gift set of artisan honey! Just fill out the Rafflecopter form and you'll be entered into the contest.