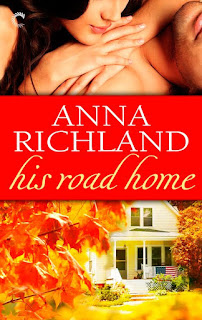 You guys. I've been waiting to fall this year. I've been waiting for that first review (embarrassingly late, I know) to need to be written. I've been reading and reading. And I've really liked a number of things (reviews on those to come, promise). But the night before last I fell into a book that filled me up in just the way I needed to kick me into gear to talk about it. Which is good, because you'll want to pick this one up. His Road Home by Anna Richland is a contemporary novella that I wished was twice as long as it was because I didn't want to be separated from the characters and their compelling situation by its ending. Happily, according to Richland's acknowledgments at the end, we may have a sequel to look forward to in the near future. This is my first outing with Ms. Richlands writing, and I picked it up based on my trusty Chachic's rating over on GoodReads.

Grace Kim's fairly straightforward (very quiet) life is thrown into rather spectacular upheaval when media outlets across the country report her engagement to wounded war hero Reynaldo Cruz. To say that she is shocked is the wildest of understatements. His name rings the vaguest of bells, as the two did grow up in the same small town in Washington state. But their lives followed radically different paths after high school. Grace got her PhD in marine biology and spends most of her time with obscure fish species. Reynaldo trained in the military and shipped off to Afghanistan. But when Rey tries to get out of an arranged marriage by faking an engagement to that smart girl back home and then steps on a land mine and finds himself at Walter Reed without his legs, things get . . . complicated. The two finally "meet" for the first time at the hospital. Grace is determined to untangle the lie and escape, while Rey is monumentally embarrassed and all set to let her, particularly as he is suffering from a traumatic brain injury that's left him fighting aphasia. But somehow . . . she comes back the next day. Somehow, his explanation haltingly drifts out, in one word, then two, then three. And somehow a decision is made to work through this exquisitely knotty situation together.

I really couldn't look away from Grace & Rey. Their story is such a quiet one, and not just because of Rey's struggle to speak coherently. Grace leads a very solitary life. It isn't easy for her to step into the role of fake fiancée, even long enough to figure out why a man like Rey would link himself to a woman like her. But after the initial shock and bafflement . . . they see each other. In that hospital room, in his crazy car on a drive back across the country, as they text each night for months while Grace is away on a research trip. And it's beautiful how gradually their friendship and growing feelings for each other unfold. Rey is as tough as they come. His determination to pick up his life, to adapt to his new prosthetic legs, and to not let Grace go (if she comes to want to keep him, too) was a pleasure to witness. Everything about their progression felt natural to me. They said (or texted) the things you would. There were no nasty recriminations, but merely the ones you would by all means expect. Nothing about the restrained and eloquent storytelling is rushed in the interests of manufacturing a desired effect on the reader. In fact, the reader is given just enough time in each protagonist's head to garner respect, affection, and a truly breathtaking empathy for them both, even as they are doing the same for each other. It was such a sweet experience reading His Road Home. I needed it.

Linkage
Smart Bitches, Trashy Books - "This is a novella that excels across the board – great characters, great writing, great story, and excellent construction."