Review | A Promise of Fire by Amanda Bouchet 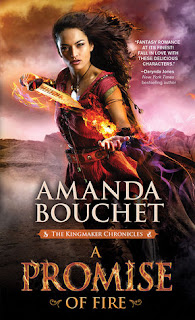 So the truth is I had a feeling about A Promise of Fire from the moment I clapped eyes on it. And the funny thing is, I was drawn to the girl on the cover because she reminded me immediately of Kate Daniels—only one of my favorite urban fantasy heroines of all time. Little did I know, so much more than just the cover of this book would go on to remind me of the fabulous Ilona Andrews series. Though the Kingmaker Chronicles are epic fantasy romance with a Greek mythology bent, they share that certain brand of high octane banter and impossibly high stakes that make the Kate Daniels books so fabulous. This is the first volume (as well as Amanda Bouchet's debut novel), and I find myself so looking forward to getting my hands on the next one.

Catalia Fisa has hidden herself as well as she knows how. Having successfully attached herself to a troupe of traveling circus performers, she cautiously employs a mere fraction of her actual ability to tell fortunes (and keep an eye out for anyone who might be looking for her). Trouble strides up to her soothsaying table in the form of Beta Sinta—a warlord in search of the fabled Kingmaker, the one rumored to possess the power to solidify control for the Alpha (or warlord) determined (or ruthless) enough to catch her. And before she knows it, Cat is literally tied to Griffin's side and carted off to the southern wilds of Sinta entirely against her will. Fortunately, she's had a lifetime of "training" in resisting force, and she will not go quietly no matter how loudly he and his band of loyal henchmen growl. But the farther they travel together, the larger the secrets Cat's holding onto loom, and the more difficult it becomes to justify abandoning this warlord who doesn't seem to want to go to war and somehow holds her nightmares at bay, to say nothing of his astoundingly naïve (if disarmingly charming) family.

This epic adventure was entirely too fun to put down. I'm a huge fan of Greek mythology, and Ms. Bouchet infuses her tale with bits and bobs and huge heaping globs of all the familiar gods and goddesses (as well as various terrifying creatures). The whole thing plays fairly fast and loose with these deities, which is admittedly appropriate, even if a couple of times her versions made my hackles rise. But on the whole the world-building is expansive and inventive and I loved traversing it with Cat and Griffin. Because those two. They are wild forces to be reckoned with, and I loved watching them snipe and bat at each other every step of the way. Cat's power is revealed in as infinitesimal chunks as possible, reluctant as she is to involve any other being in the gargantuan nightmare that is her past and the impending doom that represents her future. And having spent a lifetime being used by those more powerful than she, she refuses to go back to a place of vulnerability. While the reader is privy to quite a few of these internal struggles, Griffin is not. And he, for all his insisting on assuming the Beta role in his kingdom, does not deal well with obfuscation or dismissal. The result is a host of sparks. An early exchange:


Beta Sinta stops, his mouth flattening in obvious irritation. "Help me, Cat. Or at least tell me the truth. I know when you're lying."

"Oh?" My heart trips over its next beat.

"Your eyes get twitchy."

"My eyes do not get twitchy!"

"This one gets narrower." He touches the tip of his finger to the corner of my right eye, and a little jolt zips through me. "It's as if you're expecting the lie to hurt, but it doesn't because it's your own."

As I said, the banter (or, in this case, my favorite kind of quiet tension) between these two just carries the day throughout the story. Cat's ability to tell when people are lying is a skill of such magnitude that Griffin finds himself unable to let her out of his sight. The pain that it simultaneously causes her, though, is just the tip of the iceberg when it comes to answering the questions of why Cat is the way she is. But Griffin didn't battle his way to placing his sister on the throne without amassing the persistence and indefatigable will it takes to reach whatever goal he sets himself. What I love about Griffin is how he learns to make space for Cat, how clearly he recognizes and admires her abilities, and how his plan to use her morphs into a desire and a need to support and aid her in her own troubled journey. Just what that journey will entail remains nebulous to everyone involved, clearly to be unraveled in future volumes, though it is pretty clear to the reader exactly who and what is gunning for her. Cat herself is a wriggling ball of sarcasm, frustration, repressed affection, and leashed power. She elicits the wide gamut of emotions in both the reader and her supporting characters. But it's clear she's got charisma to spare and energy and guts enough to carry us all through any number of wild romps.

Linkage
The Bookpushers - "I adored the romance between Griffin and Cat and the world-building was memorable, vivid and well thought out."
Dear Author - "The worldbuilding is complex but not overwhelming, with insights being doled out as needed for the most part, rather than in a massive info-dump."
Fiction Vixen - "I was engaged from the moment I read the first word right up until the wee hours of the night when I, bleary eyed and tired, read the last."
Ivy Book Bindings - "For lovers of YA Fantasy, A Promise of Fire is better than fantasy-lite, and for those who adore a healthy dose of romance, Bouchet's debut can't disappoint."
SBTB - "I will also go on record to say that, so far, this is the best book I’ve read in 2016."