Review | The Q by Beth Brower 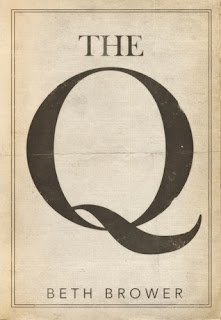 I'm feeling very possessive when it comes to this one, guys. I finished it a few days ago, and it has been a bit touch and go emotionally since then. You try to find other characters and other places to fill the void, but the truth is—it's not your first rodeo. And you know very well you're not going to simply be able to will the ability to move forward with your life. That you're just going to have to wait it out and mourn having been with Quincy and Arch, er, those characters, as steadily and for as long as you were and then learn to live on a day-to-day basis not being with them. And, yes, I do know they're sitting right there on the shelf whenever I need them. But you know what I mean. You have to somehow get past the end having happened to you, too. And not just to them. The Q is a lovely little (actually gratifyingly thick) standalone historical fiction (with a twist) novel and instant entry on my Best Books of 2016 list. Oh, and lest I forget, that cover. It is everything. With the newsprint? And the crease? And that very particular Q? Everything, I say.

It's worth mentioning that Beth Brower and I are friends. And that while I've talked about and spotlighted her work several times on the blog, I haven't reviewed her first three novels because of the close nature of our friendship. But this one, you guys. No power in the 'Verse could stop me from spreading the word. It's that good.

Quincy St. Claire makes time for nothing and no one not intimately involved in the day-to-day machinations of her beloved printing press—The Q. Since being taken in off the streets by her Great Uncle Ezekiel (along with her friend and fellow foundling Fisher), she has harnessed every ounce of her formidable energies and poured them into making Ezekiel's unusual press run like clockwork. And if it is true that Quincy's name is spoken far and wide throughout the lower streets and upper parlors of Rhysdon, it is also true that no one, with the possible exception of Fisher, truly knows the girl who sits on the high stool behind the counter. The girl who writes down the questions that pour in from the denizens of the city, each on an individual Q slip, and who then prints them to be sent out into the world to find their answers. Within the confines of The Q, it is Quincy's world. And it follows her rules. Until one night the heretofore laid back, if quite elderly, Ezekiel throws the hitch of all hitches into her plans. He is to die, he tells her. Imminently. And he has set her a task in the wake of his passing. Twelve of them, to be exact. Not only is she not to be informed what the tasks are, she is to be monitored in her efforts by none other than the bane of her existence—Mr. James Arch—The Q's solicitor and general disapproving stick-in-the-mud. If she fails, The Q will fall into other hands. Ezekiel proves immovable, as well as a man of his word, and so it is up to Quincy to go against every one of her grains and divert some of those well-harnessed energies to accomplishing the mysterious tasks. The alternative, after all, is unthinkable.


Quincy unwound her scarf and laid it over a matchstick chair. Removing her jacket, she opened her creaking armoire and hung it back in its place. Rolling up her shirt sleeves, Quincy walked to her window—a single window that looked down on Gainsford Street—and frowned at the snow.

The Q was to be given away.

If she could not fulfill her uncle's obscure requirements, The Q was to be given away.

On either side of Quincy's window stood two bureaus, tall, with five drawers each, large enough to fit clothing, papers, and what few possessions Quincy found worth keeping. She liked them not for the plebeian practicality they offered, but rather for the way that, when she pulled herself up on one and rested her feet on the edge of the other, Quincy found herself perched high in her window, watching whatever was passing on the street below. She did so now, feeling the gears of her mind catching, too disjointed by her uncle's words for their usually smooth, oiled rotation.

This early passage was the first moment I felt in perfect sympathy with our heroine. As she felt her mind strain to accommodate an unforeseen, wholly unwelcome shift in her well-ordered world. An old and solitary soul tucked economically inside the body of an eccentric young slip of a girl, Quincy is all that is analytical and stubborn, prone to excellence and disdain in equal quantities. In short, I loved her to pieces. From her dogged taunting of the self-righteous Mr. Arch to her single minded passion for the business that gave her life a reliable shape and purpose. To say nothing of her quiet, unwavering loyalty to her oldest (and only) friend Fisher and her uncharacteristic (some might say) fondness for a certain disreputable smuggler who drops into her domain from time to time. Oh, yes, I understood Quincy. And because I understood and loved her, I felt keenly her fierce determination and resolve to hold onto The Q at all costs. And so the pages flew by, full of eloquent and visceral descriptions of the workings of the press. I fell in love with not just Quincy, but with the intricate hierarchy of Rhysdon society, and especially with the people from all walks of life who found themselves drawn to this fanciful, yet precise location where they might quietly voice their questions, knowing that they will be heard, set in careful type, and perhaps someday answered. For a young woman with little use for demonstrative affections, she manages to provide rather a lot of hope for a city in need of just that.


Quincy and Fisher walked through all this in silence. Silence was the most common stock-in-trade between them, and the portfolio of their friendship was thick with it. So, without words, they stepped across the streets, their feet pressing the pavement with the same sounds, their toes turned just so; they knew what life was like at each other's side. Sometimes he would speak, or she would, small offerings on the altar of their joint survival.

This beautiful friendship was one of the most affecting aspects of the novel—for its solidity, its history, and its ardent portrayal. Bound together, are Quincy and Fisher, and we get to see them continue to chase survival on all its levels. And while we are speaking of ardency, I would be remiss if I didn't express my wholehearted devotion to the romantic vein that wends its way through the tale. I so appreciate that readers are given just as many pages as they might want to witness that particular relationship develop in the organic, stumbling, messy, and magnetic way that it does. Even more, I admire the way the two of them don't alter their essential chemistry to fit the other's expectations. They rage when they should rage, but they also see beyond the surface when the light glances off the other person in just the right way. Most importantly, they don't forget what they've seen and just how valuable it is. As I said, days later, I still can't get them out of my head. They're in there, striding down alleys and scarfing down buns, and generally making it impossible to get anything else done, so badly do I want to just sit back and watch them push and support each other and question wildly whether or not they will ever be able to make it come out right. I loved them so. The experience of reading The Q was an impossibly charming one. It repeatedly put me in mind of a few time-honored favorites, from a little Westmark here to a little Spindle's End there, to say nothing of a healthy dash of Dickens just for good measure. In the end, one thing is certain—The Q has room for you.

The Q is out today!