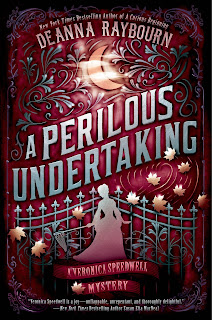 I decided to start off the year with a read I felt was sure to satisfy. That's the space I'm occupying right now, guys. I need something new and I need something that's going to just make it right. Tall order, I know. But I've been a fan of the first Veronica Speedwell mystery for awhile now, and I was definitely eager to rejoin Veronica and Stoker's company to see what adventure they might find next. Deanna Raybourn has been my go-to author when it comes to Victorian mysteries for awhile now. Together with Sherry Thomas, Anna Lee Huber, and Laurie R. King, she brings the nuanced character development and effortless charm that I so enjoy to historical shenanigans and foul play.

Veronica Speedwell has been thwarted in her latest plans for further world exploration when her host trips over a tortoise (truly) and sustains a compound fracture, the likes of which make their journey to the South Pacific impossible for the foreseeable future. And so she and Stoker are stuck cooling their heels in the back gardens, cataloging museum items and generally trying not to get on each other's nerves. But their pasts (most definitely plural) and murder do tend to find them. Before long, Veronica has accepted a most mysterious request from a very royal source to investigate the grisly murder of a local artist and exonerate the man who is set to hang for the crime. Stoker (as per usual) is less than thrilled with Veronica's audacity on his behalf. But not so much that he isn't soon along for the ride.

A Perilous Undertaking starts off at just a cracking good pace. It was immediately excellent to be back with our intrepid leads, and I was intrigued by the ongoing exploration of Veronica's royal connection woven into this second mystery. Veronica is at her best, in my humble opinion, when she is at her most acerbic. Thus, her early interactions with both Scotland Yard and the mysterious Lady Sundridge assured me all would be well. The other genuine attraction of this series lies in the tempestuous but true relationship between Veronica and Stoker. And when it is just the two of them, things do feel right.


He shook his head. "You are mad. And I am madder still for letting you talk me into this."

I gave him a wry smile. "We will be like Arcadia Brown and her faithful sidekick, Garvin," I said, invoking our favorite literary detective. Stoker claimed not to enjoy popular fiction, but ever since I had introduced him to the lady investigator's adventures, he had devoured them while still pretending to be above such diversions.

He narrowed his gaze. "If you are expecting me to brandish a pistol and go haring off with you, crying 'Excelsior!,' you will be waiting until the crack of doom," he warned. "I am only doing this because I know there is no point in attempting to talk you out of it, and you will need someone to watch your back with a murderer on the loose."

I grinned at him and lifted my glass in salute. "It begins."

You see? And begin well it does. The problem for me arose soon after, once investigations truly got underway. Things simply . . . slowed down. Not that they weren't out and about in pursuit of their goal, but nothing truly seemed to progress. Not their relationship, not their roles within the larger picture, not the complexity of the mystery itself. I have always loved allowing mysteries to unfold in their own time, but the secret at the heart of this one was sort of glaringly obvious from the start. No matter how many players joined the fray, I knew who it was and why. And the problem wasn't so much that but the fact that they were tired reasons. In fact, so many of the elements of this jaunt felt tired to me. Every one of Stoker's actions was "lavish." Every new character on the scene remarked upon the very same set of Veronica's characteristics. Every new bit of "shocking" evidence hailed from a sort of laundry list of standard Victorian tropes. Opium den, check. Den of iniquity, check. Jealous wives, check. My dismay grew with each passing page. The thing is, we readers are already one book in at this point. We know the specific ways in which our heroine gleefully flaunts her society. We already love her for them. We do not need to be bashed over the head every other paragraph with why they make her unusual. We would like more in the way of introspection. And that is how it felt. Like all of the labels and the general exclaiming over them stood in for actual character development. Even between Veronica and Stoker, I felt cheated out of more depth. They bantered. They aided and abetted each other. But they never grew. There were a couple of moments that were clearly meant to accomplish this, but to me they felt manufactured in the extreme, particularly their timing and the way in which they were presented. I finished, but I finished disappointed on the whole. Mine is, I realize, a very personal reaction to this book. So if you enjoyed A Curious Beginning (as I very much did), I do think you ought to give A Perilous Undertaking a try. It might just be your cuppa.

A Perilous Undertaking is due out January 10th.

And now for the giveaway! Berkley has kindly offered up a brand new copy to one lucky reader. The giveaway is open to U.S. addresses only and will run through Tuesday, January 10th. To enter, simply fill out the Rafflecopter. Good luck and happy reading!